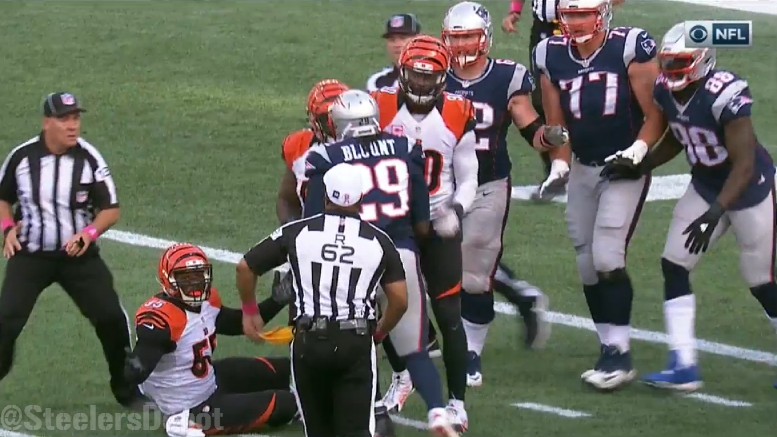 Maybe I’m misremembering, but quite frankly, I find there to be a stark contrast between the Pittsburgh Steelers and the Cincinnati Bengals when it comes to addressing the wrongs of their players. The Steelers tend to at least acknowledge that something is wrong, and they have disciplined their players or worked with the league to organize an appropriate level of discipline.

Today, we find the Bengals circling the wagons around their beleaguered teammate, linebacker Vontaze Burfict, after he was handed down a $75,000 fine for stomping on the leg of Patriots running back LeGarrette Blount in Cincinnati’s blowout loss to New England on Sunday.

It was one of two plays that the league took under review for this week, the other one being an obviously low hit on a Patriots defender while he was a defenseless receiver, but this was the only play for which he was fined.

While many around the league seem to be advocating that the league throw the book at Burfict—he already began the 2016 season serving a three-game suspension in large part because of his actions against the Steelers during their Wildcard round loss in the playoffs last year—his teammates and coaches insist that he’s being demonized and are tired of it.

Head coach Marvin Lewis said as much during his press conference yesterday, insisting that Burfict was trying to get Blount to take his hand out of the facemask of a teammate at the bottom of a pile. Even if that were true, however, that would not disregard the fact that he blatantly stomped on another player’s leg.

“I see him trying to step through and going to help the teammate who has a hand of another player on his facemask, pushing him in the face”, Lewis said. “That’s what he’s trying to get to. It’s unfortunate. That’s what I’ve told people, stood on, and will continue to stand on”.

The claim is, of course, utterly ridiculous because Blount was not engaged with anybody and well in the process of trying to stand up by the time that Burfict approached.

When asked if Burfict is being singled out and judged more harshly because of his reputation, Lewis said that he agrees, “100 percent”, and said that “that’s a thing he knows. He has to know that all the time. Just play football”. But he also has to know that leg stomping is not a part of football.

Even more egregious was left tackle Andrew Whitworth, who continues to come to Burfict’s defense every time he is put in the spotlight for things that he does. The Pro Bowl lineman even turned it around on the Steelers, because of course.

“There are a lot of guys that play nasty”, he said, and pointed to Steelers safety Mike Mitchell, who according to Whitworth ‘vaulted’ A.J. Green earlier this season, “trying to take his helmet off”. I would just like to know what he would think of that same play if Burfict were the one who had done it.

“Why wasn’t he judged a monster?”, he asked of Mitchell. “He’s got a lot of helmet-to-helmet hits [note: he doesn’t]. We all keep playing into the narrative. My point is just don’t even talk about it. It’s stupid”.