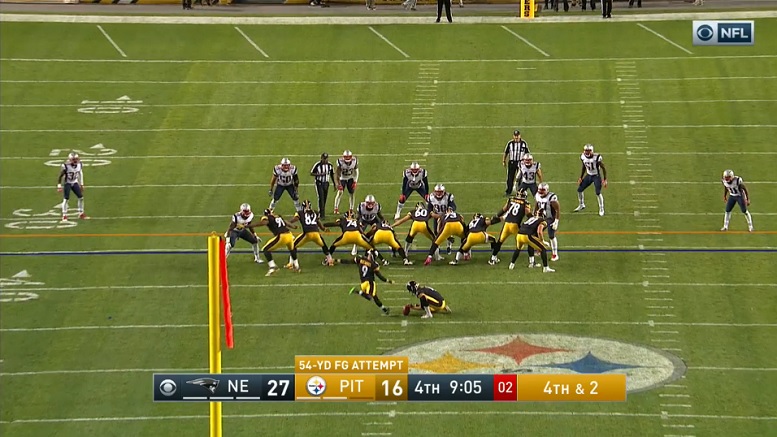 The Pittsburgh Steelers blew several opportunities in Sunday’s home loss to the New England Patriots and one them came following a turnover in the fourth quarter when head coach Mike Tomlin decided to let kicker Chris Boswell attempt a 54-yard field goal on 4th and 3 with 9:05 left in the fourth quarter.

Boswell’s attempt was way wide to the right and after the game was over, Tomlin was asked if he had thought about leaving his offense on the field to go for it on 4th down.

“I did not,” Tomlin said. “He made a similar kick over a year ago right there in that same spot and the same field when we tried him out and the weather conditions were worse than they were tonight we were down there and had an opportunity to make it one-score game, I took that chance.”

The long missed field goal by Boswell came after Steelers quarterback Landry Jones threw incomplete to running back Le’Veon Bell on 3rd and 3. At the time, the Steelers were trailing 27-16 and that possession was provided to the offense thanks to a fumble by Patriots wide receiver Julian Edelman during a punt return.

Instead of giving Bell the ball on that third down, the call was for the Steelers to pass and after Jones dropped back and avoided the rush, his pass to an open Bell, who had escaped out of the backfield after initially blocking, was a bit high and the running back couldn’t handle it. Had Bell even caught the pass, he would have done so about 7 yards behind the original of line of scrimmage with a Patriots defensive player closing in on him.

Even though the play-call should have been to run on 3rd down with the intention of going for it on 4th, Tomlin wasted no time sending Boswell out to attempt the long field goal after Jones’ pass fell incomplete.

Boswell, by the way, had also already missed a 42-yard attempt with 4:47 left in the first half.