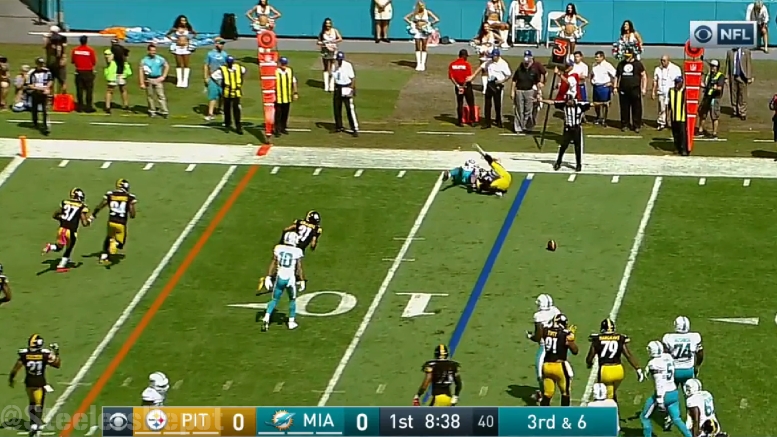 The Pittsburgh Steelers may have had some glaring deficiencies on the defensive side of the ball yesterday—none more obvious than the inability to contain the perimeter on outside zone runs, which accounted for the vast majority of Miami’s 200-plus rushing yards, but it can at least be said that they played well enough to allow the sputtering offense to crawl close late in the game and make it a one-possession game.

The defense yielded over 400 yards by that point, but the fact is that they only surrendered 23 points on the road, which is not necessarily too bad. Of course the end-of-game 62-yard touchdown run really fudged up the numbers, and the point I’m making, but I digress.

The point I am looking to make is that the Steelers defense actually did a very commendable job once against when it comes to stepping up in the red zone, which has been a theme that has played out throughout the 2016 season thus far, with, really, the only negative game in that respect coming against the Eagles. Otherwise, the Steelers have been one of the best defenses in the league when it comes to keeping teams out of the end zone once they cross the 20.

Yesterday, they held the Dolphins without a touchdown on their first three trips inside the red zone, and overall allowed only two touchdowns in six red-zone stand opportunities, and as a bonus, they even held the Dolphins scoreless on one occasion, courtesy of a rare blocked field goal.

If I told you prior to the game that the Steelers’ opponents would get inside the red zone six times, you would probably be dreading your first opportunity to get a glimpse at the scoreboard. Now, the scoreboard still wasn’t in their favor, giving up 30 points, but seven points came from well outside the red zone, and we are focusing here on the red zone defense.

The Dolphins ended up piling up 23 points in six trips inside the red zone, which works out to fewer than four points per trip inside the red zone. That is a nice average by anybody’s standards. Miami hit on three shallow field goals to start the game before they finally cracked the end zone late in the first half, after Ryan Tannehill escaped a sack on third and seven only to hit his receiver for 39 yards to the two-yard line.

They punched it in from the one-yard line two plays later, and, after their first third-quarter possession ended with a blocked field goal from the six-yard line, Miami came back to get into the end zone on their second possession after they recorded an interception near midfield.

Afterward, the Dolphins did manage to get to the 31-yard line, from which distance they missed a 50-yard field goal. The Steelers still had life at this point, but the offense wasn’t operating well enough to catch up until it was too late, and then Miami finally put them out of their misery at the end.