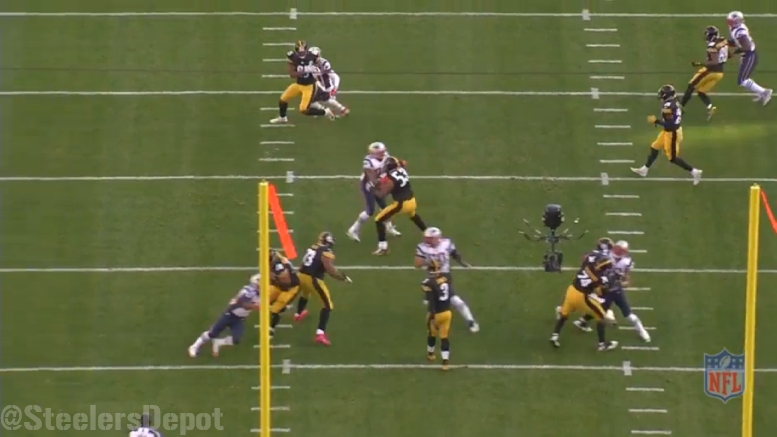 This may not have been obvious based on the stat lines, but on Sunday against the Patriots, Pittsburgh Steelers first-year tight end Xavier Grimble played an awful lot of football, seeing 42 snaps during the game, many of which came as the lone tight end on the field, and equating to almost 60 percent of the team’s total snaps.

That is not to say that he had a great game by any means—he caught two passes on five targets for 14 yards and drew a false start—but it is certainly an interesting decision to come all of a sudden when you consider that he only had roughly double the number of snaps he played on Sunday through the first six weeks of the season, without any indication of an obvious upward trend.

There can certainly be some theories proposed as to why the coaching staff elected to give Grimble so many snaps, while cutting back the snap count for Jesse James, who for the first time this season played less than 75 percent of the Steelers’ snaps during a game.

For one thing, there is the idea that the team is seeing that James is not fit to be an every-down tight end, and perhaps they are beginning to see that Grimble is the better in-line blocker of the two. throughout the season, there is a clear trend of Grimble being the in-line blocker on almost every occasion in which they are lined up next to each other.

Certainly there is no matchup-specific reason, at least that I can identify, to explain why the Steelers would decide that the Patriots would be a good opponent to utilize their first-year tight end a great deal more than they have in any previous game, and if there was, they didn’t really utilize him in any way that suggested they were trying to exploit some aspect of New England’s defense or mask their own deficiencies.

A theory could also be proposed that it is related to the impending return of tight end Ladarius Green, who may be able to return to the field as early as the Steelers’ next game in Week Nine against the Ravens.

In such an event, Pittsburgh would have to make a roster move between now and then in order for Green to be activated to the 53-man roster after he practiced with the team yesterday for the first time ever since being signed.

One of the most logical possible roster moves would be to cut Grimble in the hopes of moving him back to the practice squad, although there are, of course, other options available to them. Perhaps the extended playing time on Sunday was based in part on the desire to gather more information to inform that decision.

If that is the case, then he did not exactly put his best foot forward, although I would not say that any of his three incomplete targets were necessarily drops. Personally, I would like to see Grimble stick around, but his practice squad eligibility makes it an enticing option.