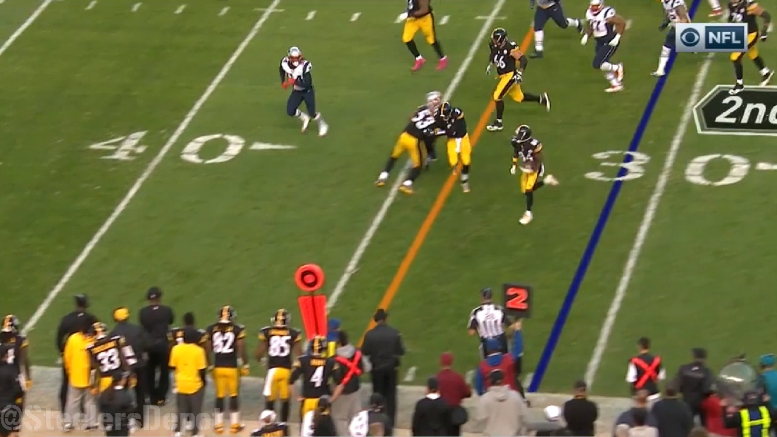 Considering the fact that he has a number of All-Pro honors in his background and is coming off an entire season missed due to injury, it is a bit odd that we haven’t talked a great deal about Pittsburgh Steelers center Maurkice Pouncey over the course of the first six weeks of the season—not even when he played ‘against’ his identical twin brother a week and a half ago.

Part of it, perhaps, is that he is more or less taken as a given at this point in his career, a known commodity who is going to give a baseline minimum performance. But part of it is also that he really hasn’t been that spectacular this year either. Not bad, just not drawing much attention.

Sunday’s game against the Patriots was a fairly typical performance for Pouncey this season, in terms of quality, however, so it should serve as good an example as any, even if the game didn’t get off to a great start for him.

On the second play of the game, running back Le’Veon Bell hit the right-side A Gap, but Alan Branch was able to shed Pouncey’s block and raked his arm across the ball, jarring it loose, for just the second fumble in Bell’s career. In Pouncey’s defense, it’s not clear at all that Bell hit the designed hole—and, if anything, it more like than not was supposed to go to the left before the back was forced to adjust.

That may have been the biggest ‘negative’ play for him on the day, however, and on a play that wasn’t really explicitly his responsibility. His run blocking was typically better than that, as on a first-down play on the team’s next drive, on which he and Ramon Foster worked a combination block to get Branch on the ground in the hole.

Late in the quarter, on a play that ended up with offensive pass interference being called, it was Pouncey’s protection that helped the throw even get off. With Branch cutting to the right, inside linebacker Elandon Roberts scraped off the back and blitzed the left-side A Gap, jarring Pouncey off the point of contact, but the center was able to backstep and regather his base, settling down and holding the point of attack.

The Steelers did manage one touchdown during the game, on and that snap, Pouncey dominated his individual battle, getting a good jam off the snap and then knocking down the hands of the nose tackle, sending him to the ground and able to settle on him to keep him out of the play.

In case you were wondering where all the mobility plays were, one of note that I found was the reverse to Antonio Brown, on which Pouncey got downfield and was actually ahead of the play, waiting for a defensive back to cross the field so he could get a nice pop block in as Brown bent the corner for 13 yards.

In all, it was a solid to good performance from Pouncey, but we have seen him play better and more impactful games in the past. He has not been exceptional this year, but he isn’t struggling, either.