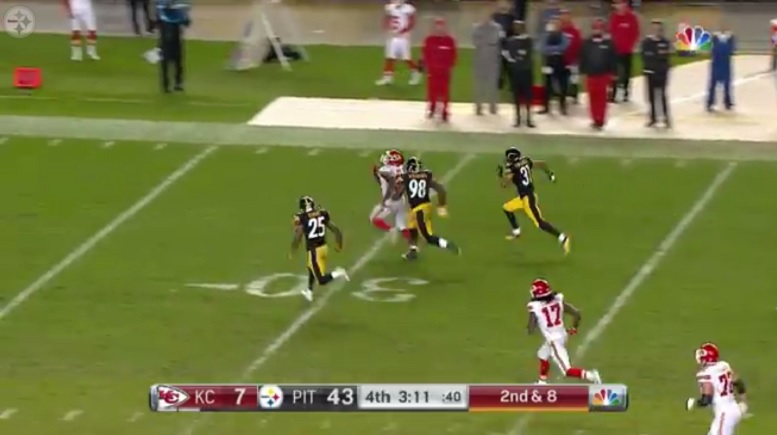 The Pittsburgh Steelers didn’t have starting inside linebacker Ryan Shazier Sunday night for their home game against the Kansas City Chiefs and that meant that Vince Williams had to start in his place. Not only did Williams play well in the team’s blowout win over the Chiefs while filling in for Shazier, he also led the team in tackles, and by a lot.

Williams, who signed a three-year contract extension prior to the start of the regular season, recorded a career-high 16 total tackles Sunday night against the Chiefs and that included a sack, his first full one in the NFL.

While you hope that it doesn’t have to happen a lot moving forward, Williams also displayed some speed late in the Steelers win as he chased down Chiefs running back Spencer Ware from behind after he had busted through the middle of the defense on a 2nd and 8 run with 3:18 left in the fourth quarter. While the Steelers were ahead 43-7 at the time, Williams’ effort was if the outcome of the game remained in the balance and his tackle quite possibly saved a touchdown on that particular play.

Williams, who was drafted originally by the Steelers in the sixth-round of the 2013 NFL Draft out of Florida State, entered Sunday night’s game with 5 total tackles on the season and his 16 total tackles against the Chiefs more than doubled his single-career high up until that point.

“I just wanted to go 110 for my dog,” Williams said after the game when asked to talk about him filling in for Shazier Sunday night, according to Chris Bradford of The Beaver County Times.

It’s still unknown how long Shazier’s knee injury will keep him sidelined so Williams could very well wind up starting in his place again next Sunday in the Steelers home game against the New York Jets. It doesn’t sound like he’s ready to think about that right now, however, based on the comments he made after Sunday night’s big win.

“I love sending Steelers Nation home and to work on Monday with something to brag about,” Williams said.

Williams also deserves to brag about the game he played Sunday night, which by far was the best of his career to date.

Vince Williams on filling in for Shazier: "I just wanted to go 110 for my dog." #Steelers

Vince Williams: "I love sending Steelers Nation home and go to work on Monday with something to brag about."