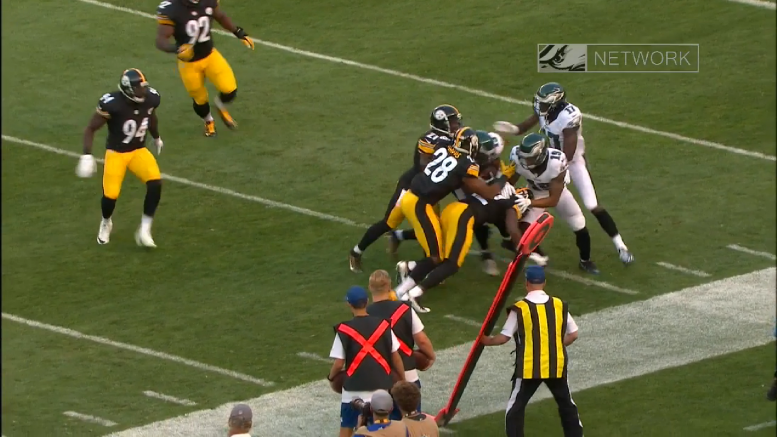 While there wasn’t a ton of good news to be anticipated from the Pittsburgh Steelers’ final practice session in advance of their Sunday Night game in Kansas City, we did receive some positive reports when it came to certain injuries. Particularly, B.J. Finney’s finger injury proved to be minor, and rookie defensive back Sean Davis was able to participate enough to indicate that he may be available to play in some capacity.

Be that as it may, the second-round safety is not anticipated to resume what has become his usual role in the team’s defense, given his back injury and the fact that his practice time during the week was significantly curtailed as a result of said injury. Missed practice time for rookies is a big no-no.

Still, it is reported that he may be available to play in some capacity, and that leaves the Steelers with some interesting options in five- and six-defensive-back schemes. With Robert Golden out and Jordan Dangerfield reportedly taking his place, in fact, it may open things up even more.

Based on practice reports, it would appear that first-round rookie cornerback Artie Burns is going to be the first defensive back off the bench, and he is going to slide into William Gay’s role on the outside, pushing the veteran into the slot.

But in circumstances in which the team might want to keep Gay on the outside for whatever reason, they may call upon Davis to log a couple of snaps in the slot, which, when the secondary has been healthy, has been his primary function up to this point.

When the Steelers go to their dime defense—which they did heavily in the second game of the season—they do have options. They have tended to prefer three safeties in this look over four cornerbacks, which would suggest that Davis could see time in this package.

But Justin Gilbert has also said that his chances of playing tomorrow are great, so we should at least expect him to play some. Where and when, and whether it would be exclusively in the dime or if he might log any time in the nickel, will require the game to determine.

It is not uncommon for a rookie gaining playing time to fall out of the lineup due to injury, with somebody else who is more available taking his place. This is what ended up happening to Shamarko Thomas during his rookie season.

If Burns actually happens to play well in extended playing time against Kansas City, following this game, we may actually see him become the team’s primary nickel defender rather than Davis, who is more geared toward playing safety than in the slot anyway.

If Davis returns to full health before Golden does, in fact, we might see them both gain extended time next week as two of the team’s top five defensive backs, one in the starting lineup and the other in their ‘base’ nickel defense.