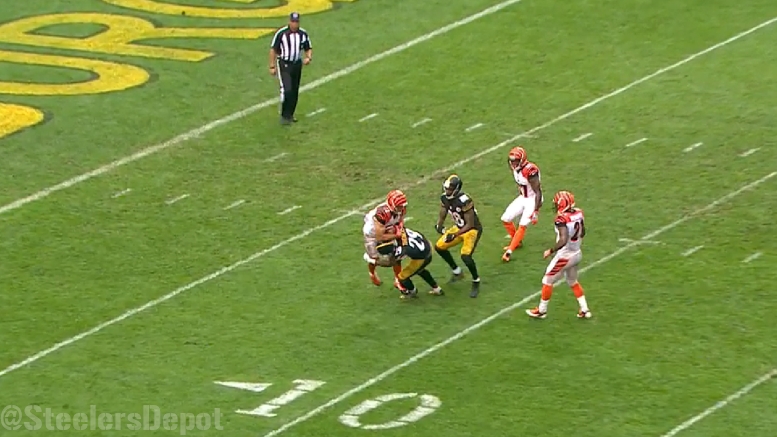 When it comes to Pittsburgh Steelers fourth-year safety Shamarko Thomas, it seems that for a lot of people it is a struggle to evaluate him outside of the prism of the ambitions that were prescribed for him when he was drafted, given the role of inheriting the strong safety spot that Troy Polamalu controlled for so long.

This is, of course, absent the fact that the was just a mid- to late-fourth-round draft pick, where the focus tends to be on the fact that the Steelers traded a third-round pick to get that pick to select him. He got in on defense early, but never re-established a role for himself after he was replaced following an ankle injury in the middle of his rookie season.

However, he has for a long time been a building block of one unit, at least, that being on special teams, and especially as a gunner on Danny Smith’s punt coverage units. Smith is a coach who doesn’t like to single out players unprompted, but when he is asked about a specific guy, he will go on for a while about what he means to his units.

Smith was asked to name some of the contributors that have led to the Steelers’ early success on punt coverage. “I hesitate to name guys because you forget guys”, he said. “It’s a collective unit, and it’s a unit that has to be in sync. You need to get outside pressure from your gunners. You need to get hangtime from your punter. You need good inside protection and good inside lanes and things like that”.

He said that his favorite statistic is net punting yardage “because it’s a team stat. It’s the amount of distance that we flip the field. You know, you punt it 50 and they get a five-yard return, it’s a 45-yard net. That’s a big factor for us.”

But Bob Labriola then asked about Thomas, who leads the team with five special-teams tackles—the next closest has two—and Smith couldn’t help himself. “Shamarko is an outstanding player to me”, he began. “He really is, I mean I love the guy. I was meeting with him when you walked in here, and we go through particular things”.

Smith said that he appreciates the opportunity to coach Thomas because “he’s a fun guy to coach”, citing his competitiveness and his toughness. “He can run. He has a lot of attributes, and he has that want-to. He wants to be special, and he has a chance to be. He’s playing well, and I think you’ll see continuous good play out of him, and I’m proud of him because he works his butt off to do that”.