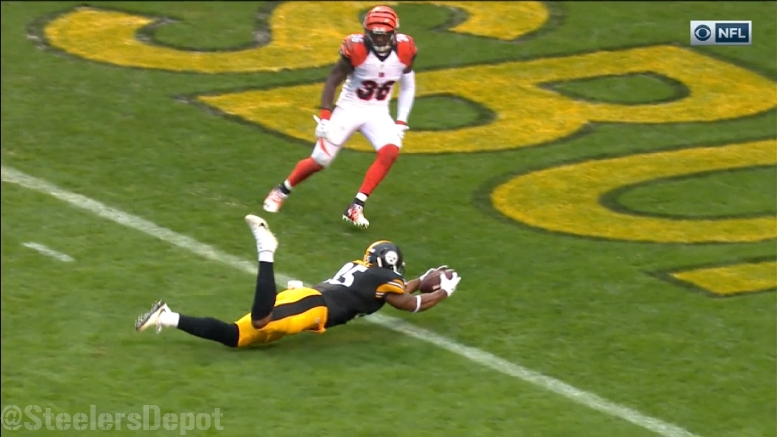 In the wake of the Pittsburgh Steelers’ victory on opening day, I made note of the fact that quarterback Ben Roethlisberger highly limited himself when it came to distributing the football in the passing game. Over the course of the past few seasons, he has more and more utilized a high number of different targets, but he was reserved to just his five primary targets against Washington.

On Sunday against the Bengals, however, Roethlisberger targeted nearly everybody that could have possibly been targeted at least one time. Aside from the five main targets—wide receivers Antonio Brown, Sammie Coates, and Eli Rogers, tight end Jesse James, and running back DeAngelo Williams—he targeted four additional players, with each of them coming up with at least one reception.

The highlight of that list was, of course, third-string tight end Xavier Grimble—if he even is the third-stringer anymore—who was targeted four times during the game, catching two of them, including an explosive play that went for the first touchdown of the game.

Tight end David Johnson also caught his first and thus far only target of the season, while wide receiver Darrius Heyward-Bey was one-for-two on his targets with a drop on third down on which he likely heard footsteps behind him. He took a helmet-to-helmet shot following that drop, though the penalty was not called.

Even backup running back Fitzgerald Toussaint caught a pass during the game for nine yards, bringing the number of distinct targets that Roethlisberger completed a pass to on the day up to nine. Five of them caught at least two passes for over 25 yards.

That is some significant ball distribution, however, when you consider that Roethlisberger completed only 19 pass attempts, meaning that each receiver on average was responsible for 2.1 receptions over the course of the game.

Only three of the targets during the game had at least three receptions, and nobody had more than four receptions. Only one of nine targets, in addition, gained at least 40 receiving yards. But that would not be greatly surprising on a day on which your quarterback only completes 51 percent of his pass attempts and less than 20 completions in total.

Still, it was valuable to see so many players get involved in the passing game, especially the likes of Grimble and Heyward-Bey, though Rogers was surprisingly responsible for only one nine-yard completion. He was only targeted twice, with the incompletion being due to the wet ball slipping out of Roethlisberger’s hands.

The only eligible receivers during the game who did not see a target were running back Daryl Richardson, who carried the ball on his one snap, and tackle-eligible Ryan Harris, who served as a run-blocker for the final three snaps of the game.

The Steelers should be getting thee more high-profile targets over the course of the regular season, with wide receiver Markus Wheaton sounding like he will be back next week. Running back Le’Veon Bell’s suspension will end after next week’s game, and tight end Ladarius Green is eligible to play in Week Seven.