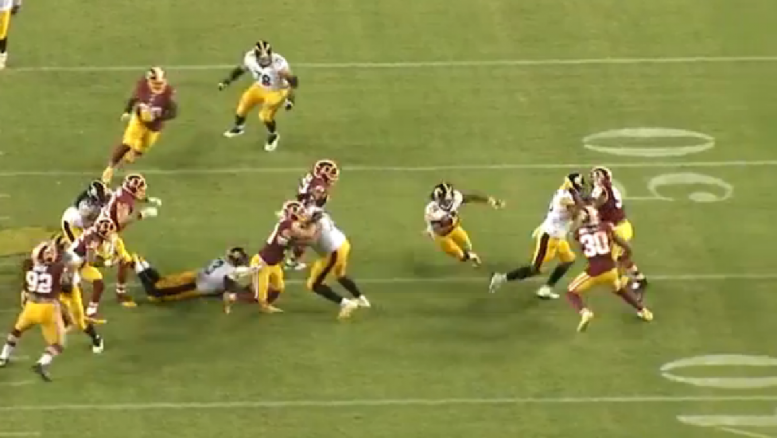 You know who played a surprisingly high number of snaps on Monday night? This guy. *points above to display image*

“This guy” is first-year tight end Xavier Grimble, who played 16 snaps for the Pittsburgh Steelers against the Redskins in the team’s season opener, which was just one snap shy of the number of snaps that David Johnson also played, something that I found to be quite interesting.

What I also found to be interesting after doing my charting was that I noticed, in his 16 snaps, he was almost exclusively an in-line tight end, tacked on to either end of the offensive line. He was only offset from the offensive line on one of his snaps throughout the game, whereas Johnson was nearly the direct opposite, seeing just two snaps along the line of scrimmage.

Grimble’s first real snap of note came in the first few minutes of the second quarter on what I must say was a beautifully-designed and executed play on second and seven. The Steelers ran a heavy set with two tight ends to the right and two receivers to the left, James shaded off the line.

James swept left behind the line of scrimmage while Grimble worked an intermediate crossing route which, coupled with the play action, cleared the middle of the field as the linebackers overreacted after biting on the false run cue. That left James open with nobody within 10 yards of him upfield, producing an eight-yard gain.

It wasn’t until late in the third that the Steelers started using more multiple-tight-end sets. On the opening play of their drive late in the quarter, they opened with three tight ends, Grimble the in-line blocker on the left, and he worked with the left tackle to seal off the end to open a running lane.

The Steelers ran out of essentially the same package late in the fourth quarter, only this time they left Grimble on his own to seal off the edge defender, and he held his own on the play. This was the best of his 16 snaps of the game, and is a bit encouraging.

The problem is that he followed it up with a negative play on the next step, which serves to highlight the inconsistency that has plagued him throughout his efforts to make the roster. On this play, Grimble’s assignment was actually to reach the linebacker, but Mason Foster held him at bay and was able to contribute to the run stop.

It will certainly be interesting to see what transpires going forward with Grimble, especially if fullback Roosevelt Nix is able to return this week. The Steelers did not hesitate to use him on Monday, even over an extra lineman as a blocker, but with Nix back, depending on the other inactives, he may not even dress, since they did not use him on special teams.