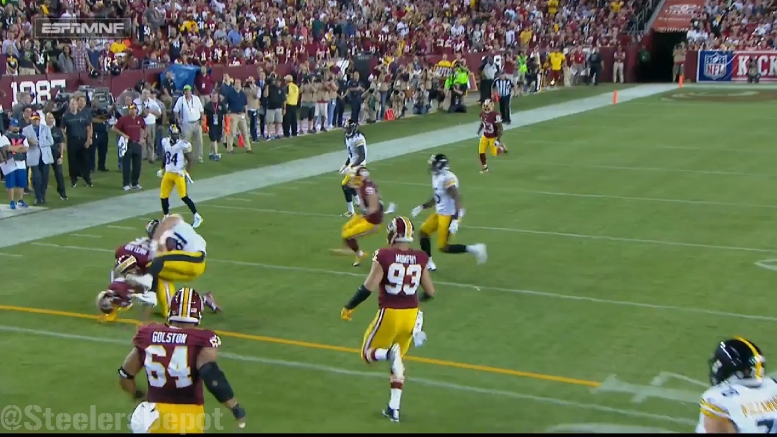 I think it stands to reason that there is a lot of focus on the Pittsburgh Steelers’ tight end position in the early goings of the season when you take into consideration everything that has transpired within the group over the course of this year.

No player is under the spotlight more right now than second-year tight end Jesse James, who spent the first eight games of his rookie season active, but on Monday night, started and played all 68 snaps in the Steelers’ victory over Washington, the only one among the skill position players to do so. As would be expected, there was good and bad, and I’m going to try to take a look at both.

The first play I want to look at comes early in the second quarter, on a first-down run. The Steelers have two tight ends to the left, with James on the inside. On the play, James gets initial help from the tackle, but ultimately works on his own to seal the defensive end, though the hole quickly closes.

On the following play, he catches one of his several passes of the night, sweeping behind the line and turning upfield, taking a hit near the first-down marker but getting the yardage to move the sticks. He didn’t always succeed in converting on the night, but he consistently showed toughness in taking hits, sometimes at the catch point, and hanging on to the ball.

Midway through the third quarter, we have James working isolated on the edge in pass protection against the outside linebacker, and it did not go well for him. The edge rusher made fairly light work of dipping underneath him, forcing the quarterback try to spin out of his grasp, and failing that, to toss a shovel pass to a running back that was not looking for the ball.

Skipping ahead to midway in the final frame, the Steelers were driving down the field trying to answer a Washington score to retake a two-possession lead. James was the lone tight end set to the right of the line, but he advanced off the snap to reach the safety. In the process of doing so, he drew a holding call that negated a five-yard run into the red zone.

He did finish off well, as he ended the Steelers’ final meaningful offensive play with a bit of a ‘nudge’ block at the goal line to allow the running back to win the corner into the end zone for a touchdown. James pulled from out of the backfield from the far side and did well to avoid drawing a holding call.

At the end of the day, James did more or less as one might expect, which is to say that he was sufficient more often than not. He is not supposed to be in the starting lineup, and it is not in the plans for him to be there long-term, but they can operate their offense with him, and he is still going to improve.