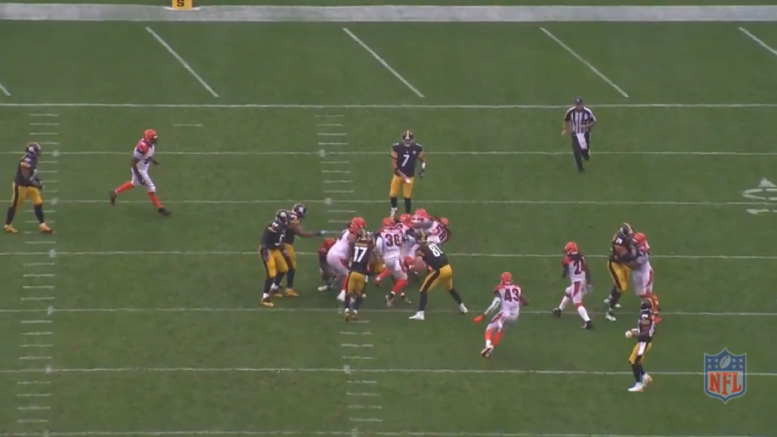 I reserved some time earlier in the week to gives some props to second-year tight end Jesse James, who caught three big passes for the Pittsburgh Steelers on his three of five catchable targets. His early showing as a receiving target has been roughly as good as could be anticipated, I think

Upon further digestion of the game, however, I feel it necessary to also set aside some time to point out that he still has a ways to go when it comes to the blocking department. To put it bluntly, his performance was instrumental on a large portion of the Steelers’ negative runs during the game.

Of especially note was his very shaky performance whenever the team tried to use him as a move or lead blocker, a role that David Johnson was much more comfortable and successful executing, and which I will take a glimpse at tomorrow.

The impact of his run-blocking struggles was felt early, on the first play of their second drive. Prior to the snap, he motioned offset behind the right tackle, then pulled around left guard, looking to engage inside linebacker Rey Maualuga, but he could not stay engaged on the block, and the linebacker got in on the group tackle of DeAngelo Williams after a one-yard gain, though he was not solely responsible for this run stop.

Later in the quarter, on a run near midfield, James motioned offset behind the left tackle before pulling this time around right guard. On this play, Vincent Rey met him in the hole and quickly slipped off the block before making the tackle for no gain.

On the first play of the next drive, James motioned to behind the right guard and center before the snap and worked through that gap in an attempt to block Rey, but the linebacker overpowered him and pushed him off his mark, which allowed him to make the tackle on Williams for no gain once again.

Early in the second quarter, he drew the admittedly unenviable task of trying to seal Carlos Dunlap outside on an inside run. The Pro Bowl defensive end utilized his long arms to control the point of contact before shedding the block and making the tackle on Williams after a one-yard gain.

One last example I will highlight is another attempted block in space, this one again on Maualuga. The veteran linebacker used his strength to gain inside positioning, which James yielded too at ease, and when Williams was forced to cut the run back inside, was there to make the tackle. Had James made his block, there would have been a running lane through that gap.

This film study is not presented with the goal of trashing James, but rather pointing out an important area of his game, and of the team’s starting offense, that is a ripe target for improvement. The Steelers are keeping the second-year tight end on the field for every single snap, which probably wasn’t in the plans.

The bottom line is that, in some aspects of his assignments, he is in a bit over his head so far. That is okay as long as the Steelers are still winning, and he will improve over time. In the meantime, he is getting valuable hands-on experience.