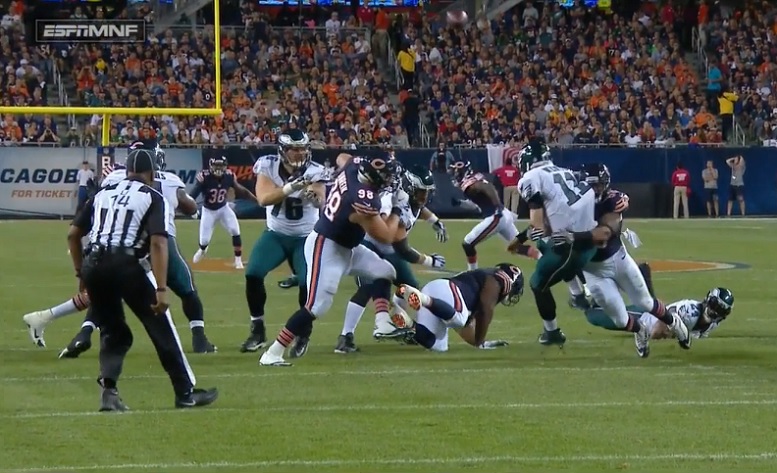 Regardless of what you read below about Philadelphia Eagles rookie quarterback Carson Wentz, you have to tip your cap to North Dakota State product as he has his team 2-0 heading into his team’s Week 3 home game against the Pittsburgh Steelers. With that disclaimer out of the way, below are a few observations on the Eagles first-round draft pick after watching his first two regular season games.

For starters, Wentz is very poised for a rookie quarterback and that’s already evidenced in his ability to check in and out of plays at the line of scrimmage. Eagles head coach Doug Pederson appears not to have Wentz on too short of a leash early on in the season and as the year wears on, I’m sure he’ll be allowed to do even more as his understanding of NFL defenses continues to improve.

While he has been reckless at times in the Eagles first two regular season games, Wentz can already be described as a tough SOB. On this throw below Monday night against the Chicago Bears, Wentz stands in the pocket and delivers a great pass to his tight end even though he’s about to get folded in half by a blitzing linebacker up the middle. While the play was unfortunately wiped out by a holding penalty, you can bet Wentz earned a lot of respect from his teammates with this throw.

Fearlessness aside, Wentz better learn to slide or make better attempts to get out of bounds when scrambling outside the football. If you watched the Monday night game against the Bears you saw Wentz take a few violent hits outside the pocket. One of those needless hits is below for you to view and his rookie season will come to an end very quickly if he continues to take more of these.

Enough about Wentz’s toughness and pocket presence, let’s talk about how he threw the football in the Eagles first two games.

For starters, it’s worth recognizing that Wentz has yet to throw an interception through two games. We all know how important turnovers are in games and while he’s bound to throw a few, the fact that hasn’t yet has played a big role in the Eagles starting the 2016 season 2-0.

As for Wentz’s deep pass attempts through the Eagles first two games, the young quarterback is 5 of 10 with 2 touchdowns. However, it’s worth noting that he could have two more deep completions Monday night against the Bears if it were not for two drops by his wide receivers. The first drop, as you can see below, was a great pass by Wentz that wide receiver Jordan Matthews should have caught for a touchdown. The second deep drop in that game came courtesy of Nelson Agholor and while the ball was underthrown by Wentz on this particular play along with the Bears cornerback making a nice effort to recovery after being beat off the line of scrimmage, the image below shows that the ball had a good chance of being caught nonetheless. 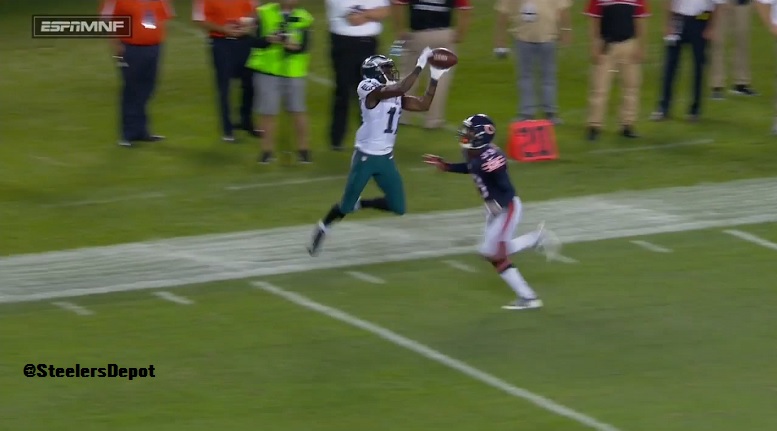 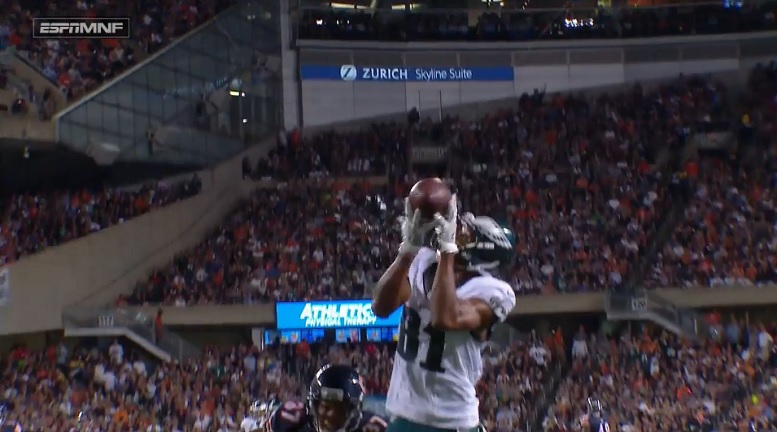 So, how has Wentz been so far on 3rd downs? Through the Eagles first two games he’s completed 9 of 19 pass attempts with only 6 conversions. 3 of those 9 completions were thrown short of the sticks as well. It also should be noted that of the four times he’s been sacked so far this season, 3 of them have come on 3rd down plays.

As far as his red zone passing goes through the Eagles first two games, Wentz is 5 of 12 with 2 touchdowns. He probably could have had a third touchdown pass Monday night to his tight end had he a put a little more air on the football as you can see in the animated gif below.

While I didn’t chart it myself ESPN.com tells us that Wentz is currently 9 of 11 for 105 yards against the blitz in his first two games. If those numbers are indeed correct, they’re quite good.

Against the Steelers on Sunday, expect Wentz to come out throwing quite a few high-percentage short passes as he settles into his third NFL start. As we’ve seen in the Steelers first two games of the 2016 NFL season, defensive coordinator Keith Butler isn’t likely to blitz very much, but with that said, it might be a little more than what we saw in the first two games as his defense has done a poor job of getting pressure on opposing quarterbacks when only rushing 3 or 4 players. Additionally, expect to see a lot of dime personnel by the Steelers defense on Sunday as that is becoming their go-to sub package unit.

The Steelers need to make sure that Wentz and the Eagles offense have to work on long fields all throughout Sunday’s game so that means a strong punting effort will be needed in addition to the Pittsburgh offense not turning the football over. So far through the Eagles first two games they have scored 16 points off of turnovers with 13 of those coming Monday night against the Bears. Additionally, like they have done in their first two games, the Steelers need to force Wentz into several third and long situations as that appears to be one of his weaknesses.

While Wentz has played well in his first two NFL games, he is beatable and especially if his short to intermediate passing falls off some Sunday in Philadelphia and the Steelers defense decides to play off a little less in an effort to force the young quarterback into second and third reads down the field.

Alex Kozora will surely have more on Wentz and the rest of the Eagles offense later on in the week so be on the lookout for that.