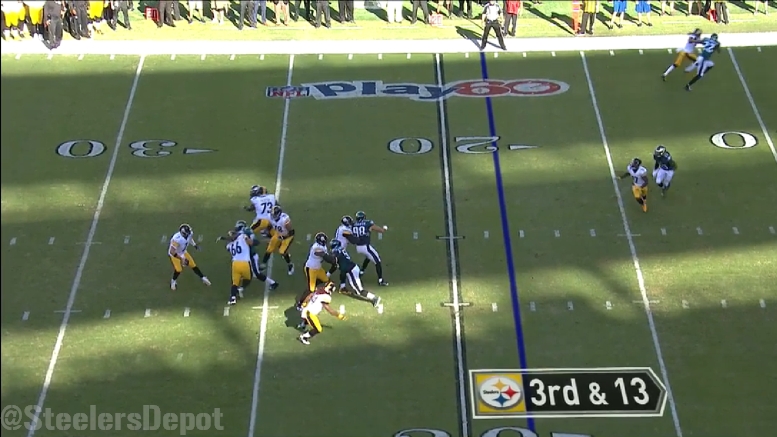 When an offense that is regarded as one of the best in the game manages to score only three points in fair weather conditions with a reasonable state of health, you can rest assured that there were a number of factors that contributed to the issue.

That is certainly the case for the Pittsburgh Steelers’ Sunday showing against the Eagles, who already went into that game allowing only 12 points per game, and, of course, a dropped touchdown and blocked field goal on the opening drive didn’t help matters.

Ben Roethlisberger’s general struggles, Markus Wheaton’s dropped passes, the lack of a run game, and the Eagles’ own offensive success all contributed to the issues as well, but one of the most consistent issues was the struggles of the offensive line.

David DeCastro did not have his cleanest game, but that would be expected going up so frequently against Fletcher Cox. There were times that he looked like a rookie again on Sunday, though, to be perfectly clear, the breakdown that follows is not meant to be representative of his entire game, but rather to highlight some of his issues in pass protection specifically, so he’s going to come out looking bad.

Take, for instance, the first play of the game, a short pass that went for no gain. Cox lined up over DeCastro’s inside shoulder and used quick hand action to gain leverage immediately, following it with a power move to drive the All-Pro backward into the pocket and force Roethlisberger to sidestep and check down.

On the final play of the opening drive, Cox set up as a three-tech rusher and used an inside club to work across DeCastro’s face and get the guard turned so that he could work at an angle. Roethlisberger only narrowly escaped being sacked, or at least hit, on this play, which should have been a touchdown, but also could have been a tackle for loss.

If we move ahead to the third quarter, there is a sequence of plays in which Roethlisberger is sacked twice, with DeCastro getting caught trying to clean up pressure allowed by others on the first sack. But he drew blame on the second sack, after helping to allow one earlier in the game as well.

On this play, which forced a fumble, it was Cox again over him as a three-tech. This time, the bulk of the damage came from a straight bull rush, forcing DeCastro to hop backwards into the pocket until Roethlisberger flushed out and Cox released to bring him down.

Head forward again into the fourth quarter, and we arrive at the interception in the end zone. Like the Wheaton dropped pass earlier, Roethlisberger was forced to scramble at least partially due to pressure up the middle allowed by DeCastro, and again, the receiver is unable to complete the play.

This is not to say that DeCastro was consistently bad throughout the game—again, this film study did not enter with the intent of providing a fully summary of his performance. This is merely highlighting out his pressure allowed during the game contributed to the offense’s overall performance, which is partly why the Steelers turned to a quick-release passing game more in the second half.