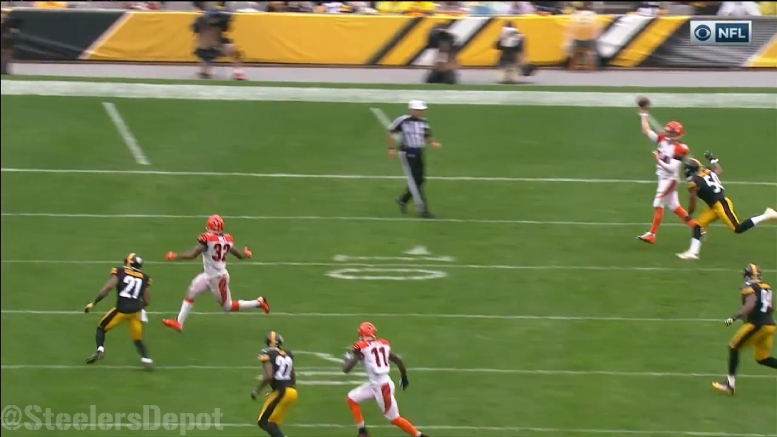 During the Pittsburgh Steelers’ season-opening victory over Washington, the defense was able to make a stop on seven of 10 third-down conversion opportunities, allowing the offense an efficiency rating of just 30 percent. On Sunday, against the Bengals, the defense did even better, allow just one in four third-down attempts to be converted, as Cincinnati went just 4-for-16 on the all-important down.

It should be noted, however, that the Bengals did manage to convert on their lone fourth-down attempt, meaning that they still were able to extend a drive on five of 16 opportunities—which is, admittedly, still quite poor.

Cincinnati did convert the first opportunity of the game on their opening drive when Tyler Boyd dropped between the two defensive backs in coverage on a corner route on third and five, but the drive stalled three plays later on third and six on a deep pass that would have been negated by an illegal shift anyway.

The Bengals went three-and-out on their next drive, ending with a drop by the tight end C.J. Uzomah on a pass that was thrown short of the chains. The pass was high but catchable, however, and he receiver had more than enough room to run after the reception to make a fairly easy conversion.

One Cincinnati’s ensuing drive, and the final one of the opening quarter, they traveled from their open 25-yard line to the Steelers’ seven before they had to settle for a field goal, after Andy Dalton checked down to his running back on a third-and-six play on which the defense swarmed to make the stop.

The Bengals’ first three drives of the third quarter both resulted in three-and-outs deep in their own territory, and the third-down failures were both a result of pressure. The first instance was a third-and-10 play in which Dalton was forced to heave a pass to Uzomah near the sideline, where he was pulled out of bounds after two yards. Ryan Shazier’s gap-shooting blitz on a third-and-one play on the following drive left Dalton with no choice but to throw the ball away and punt.

Cincinnati got behind the chains quickly on the next drive with two consecutive incomplete passes from their own three-yard line, so they chose to play it conservative and handed off on third down from the shadow of their own end zone, a run that gained one yard. The Steelers’ offense was finally able to make good on the several consecutive drives with good starting field position with a field goal thereafter.

They went 1-for-3 on third down on their final two drives of the opening half, converting on third-and-three, but they also converted a fourth-and-three with a short pass to Uzomah on the second drive, which led to a field goal.

After opening the second half with two more three-and-outs on third-and-long situations, the Bengals converted two of three attempts, one via penalty, leading to a field goal. They did not face a third-down situation on their lone touchdown drive until the actual play that scored a running back screen for 25 yards that benefitted from missed tackles. They converted just one more of three attempts otherwise.