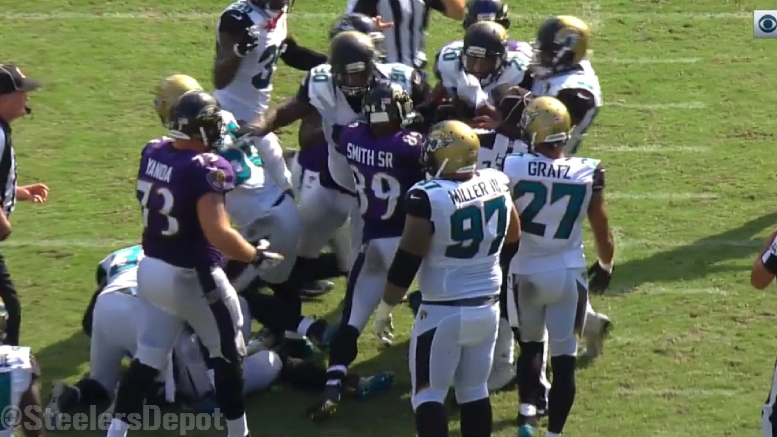 There can be no denying that Baltimore Ravens wide receiver Steve Smith has, over the course of a long career, earned a great many accolades, perhaps enough even to push him into the Hall of Fame at some point after the end of his career.

That does not mean, however, that he gets a pass for his behavior. That, at least, was the attitude of rookie cornerback Jalen Ramsey after his Jaguars faced the Ravens on Sunday. The veteran wide receiver evidently confronted the rookie defensive back after Baltimore narrowly escaped with the victory, and the young man did not seem to have much patience for it.

Following the incident, the defensive back told reporters that the veteran Smith is “still a good player. I’ll say that about him. But I don’t respect him as a man”. The post-game confrontation was fueled by an incident late in the game in which the two got into an altercation following a Jaguars interception that resulted in mutual unsportsmanlike conduct penalties.

After the game, Ramsey told reporters that Smith “came up to me, you know what I’m saying on some disrespectful stuff”, according to ESPN. “The game’s over with. You’re still mad because I was locking you up? All right, go sleep on that. I’m not trying to hear that after the game”.

As you might expect, the notoriously boisterous Smith would not leave it at that, and he soon took to Twitter after he heard of Ramsey’s post-game recount of what happened between the two of them. from Smith’s perspective, as he Tweeted, his talking to reporters was an indication of the rookie’s own makeup.

In so many words, Smith said that he gave Ramsey the opportunity to have his say face-to-face after the game, but that he only found his voice “safely behind closed doors” while talking to reporters, adding that he doesn’t need the rookie’s respect.

He went on to boast of his own resume, referencing his Hall of Fame credentials, and concluded by saying, “I got cleats with strong thread then [sic] you!!!”

This is roughly the reaction that one would expect from Smith, who said just last week, when asked if he has toned down his infamous trash talking, “I’m still a dirtbag so no, that has not changed one bit”.

Given that he was the one to refer to himself a dirtbag, I will indulge his vernacular selection and echo his sentiments that his behavior is tantamount to one who would acknowledge himself as a dirtbag. Respect for a person’s abilities does not have to equate with respect for his behavior and the way he carries himself.

Of course, Smith doesn’t need my respect, nor am I as strong as the thread in his cleats, or whatever he might have to say to me, but I don’t particularly care what he has to say either. As Ramsey said, “he’s an old man acting like that”. In this instance, the rookie showed more maturity than the 37-year-old man, but this doesn’t appear to be of any concern to him.