Pittsburgh Steelers running back DeAngelo Williams enjoyed a stellar bounce back 2015 campaign, finding the fountain of youth on his way to his most productive season since 2009. With Le’Veon Bell limited to just six games in 2015, Williams became the feature back for the Steelers, finishing with 200 carries for 907 yards and 11 touchdowns. Out of all of Williams’ carries in 2015, it is the 200th carry that holds the most significance for the Steelers going forward. This is not only because the carry saw Williams exit with a season ending foot injury, but also because 200 carries is a bench mark that has caused him trouble throughout his career.

The table above shows the results of the last two occurrences in which Williams’ has surpassed 200 carries.

It seems that anytime Williams exceeds the cursed 200 carries mark, an injury-filled season is just around the corner. After exceeding 200 carries in 2013, Williams was limited to just 6 games in 2014 after succumbing to hamstring, ankle and hand injuries. A look even further into the past shows that after exceeding 200 carries in 2009, Williams’ next season ended after six games with a trip to the Injured Reserve List after suffering a mid-foot sprain. While there is often no line drawn between bad luck or poor conditioning when it comes to injuries in football, it is worth noting that Williams’ production also fell following a 200 carry season. Williams lost over half a yard per carry in 2014 and just more than a yard per carry in 2010.

Concluding that Williams cannot handle a 200 carry season based off four seasons of data is a tad premature considering Williams is 7th in active rushing yards and attempts. To further investigate the claim, a closer look at running backs who exceeded 200 carries could help determine between fact or fiction. Below is a chart of running backs who exceeded 200 carries in 2014 and how they performed the following season, notice any similarities to Williams’ statistics above? 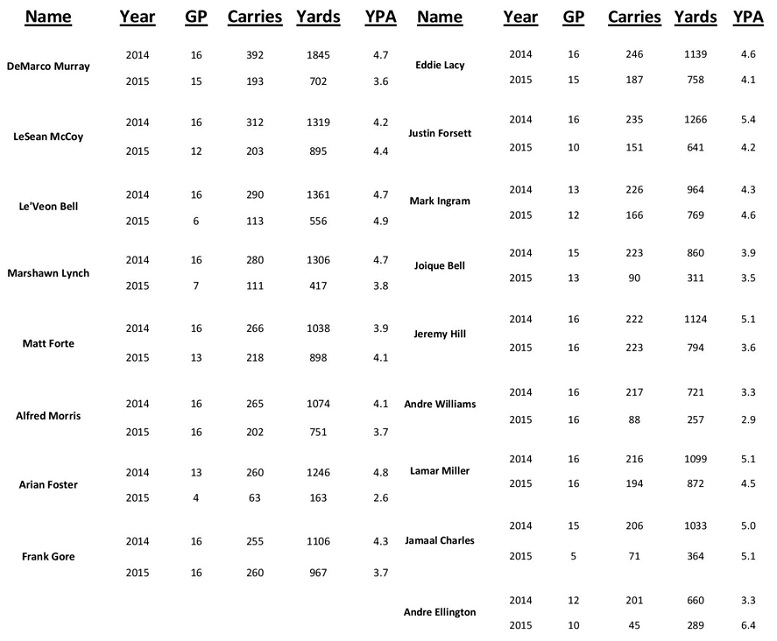 The production numbers are astonishing when comparing the 2014 and 2015 seasons for the running backs above. Seventeen running backs eclipsed 200 carries during the 2014 season, only five managed to accomplish this feat again in 2015 and zero were able to improve their yardage totals.  The same running backs who played a combined 244 games in 2014 saw this drop to only 202 games in 2015, a difference of 42 games between the seasons. Running backs also saw almost a half-yard decrease in Average Yards per Rushing Attempt, going from 4.44 YPA in 2014 to 4.03 YPA in 2015. It seems a decline or injury following a 200 carry season is probable for not just Williams but for many running backs in the NFL.

This leaves the Steelers with the question, of how to manage possible wear and tear for the now 33-year old Williams. The answer to that lies two weeks away when Bell makes his return from suspension and a MCL/PCL injury that cost the 2014 Steelers MVP majority of last season. Williams and Bell’s injury concerns leaves the Steelers with an opportunity for a shared workload in the backfield, benefiting the health and production of both running backs throughout the season.