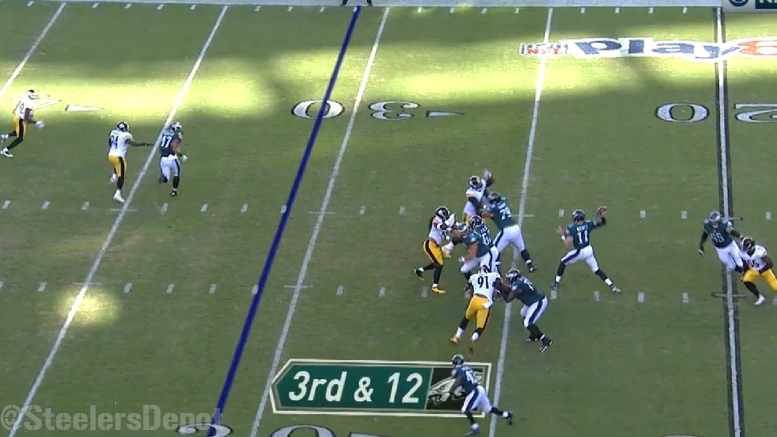 It has been three games now, and the Pittsburgh Steelers have yet to make a tackle on a quarterback that occurs behind the line of scrimmage while he is in possession of the ball in a non-scrambling situation, in what is generally referred to as a sack.

This is becoming a somewhat antiquated term in the Pittsburgh area given the scarcity with which local sports writers have had the opportunity to use the term to describe something that a player in a Steelers uniform has done. Veteran outside linebacker Arthur Moats is the sole possessor of the lone ‘sack’ on the season, and even that is only by semantics, as it was on a play in which quarterback Andy Dalton was looking to run, and Moats stopped him at the line of scrimmage for no gain, on a play in which he initially dropped into coverage.

Yesterday, the Steelers scarcely game near rookie quarterback Carson Wentz of the Eagles, though he was harassed a rare few number of times. Stephon Tuitt got close enough to draw a roughing the passer penalty, and Anthony Chickillo nearly induced an intentional grounding penalty off a play-action attempt that the linebacker did not buy.

Other than that Wentz played fairly free throughout much of the day, and it was a day on which the Steelers spent nearly the entire game trailing. Following an opening drive on which the final two plays were a dropped touchdown pass and a blocked field goal attempt, the Eagles scored on their opening drive and remained in the lead throughout, ultimately winning by a 31-point margin.

During the course of the week, defensive coordinator Keith Butler was asked about the defense’s poor production in the pass-rushing department, and he emphasized the fact that the Steelers also have a pretty good offense that puts up points, and that that dictates how he calls the defense, often with schemes that are more geared toward preventing big plays from the offense rather than creating them on defense.

It was a bit of a deflective answer that did not actually address the question. On most occasions, the Steelers still rush the passer with four players, typically two down linemen and two outside linebackers, and Butler and the defensive coaching staff have consistently preached their desire to get to the quarterback with a four-man rush.

The Steelers have now had the bulk of an entire game in which the ‘pretty good’ offense yielded next to nothing. The defense had over half a game to commit to rushing the passer in the hopes of making a play, and they failed to coming particularly close.

In other words, it’s time to stop making light of the team’s pass-rushing deficiencies and begin to take it seriously. It’s easy to dismiss issues when they come on the back side of a victory, but, while a good percentage of Wentz’ throws were screens, there is no denying that the Steelers’ inability to create pressure was one of the primary catalysts for the Eagles’ offensive success, and there have been no signs from the first two games that the defense can suddenly ‘flip a switch’ and create that pressure when they need to.