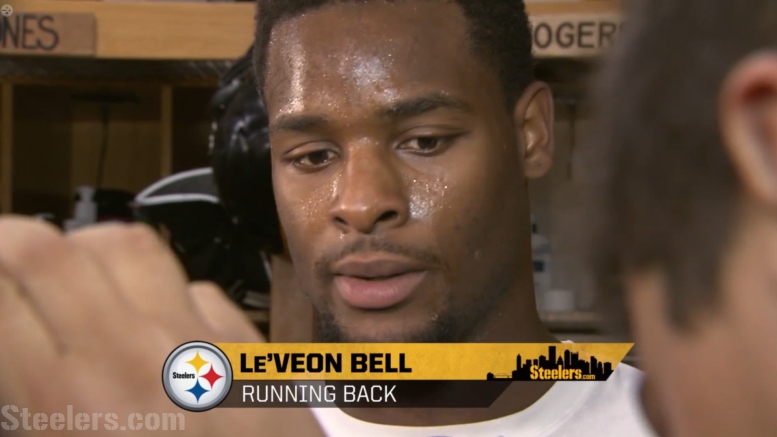 Pittsburgh Steelers running back Le’Veon Bell worked with the team in practice in preparation for a meaningful game yesterday for the first time since October of 2015, as he was preparing for the November 1 game against the Bengals in which he suffered multiple torn ligaments in his knee that ended his third season.

What followed was a long rehabilitation process and yet another curve ball when he was hit with a three-game suspension—after being reduced from four games—which forced him to sit out the first three games of the 2016 season. But that time has passed, and he is ready to get back to football.

He spoke to the media for the first time yesterday as well, as Teresa Varley did a nice job recounting for the team’s website yesterday, telling reporters, “I just want to go out there and do what I do”. Of course, what he does on the field is something that few at his position group can match, or so it has been.

He talked about what he did while he was away from the team for three weeks, a list that included further rehab on his knee, as well as working on cutting and receiving the ball. He has done little of either in nearly 11 months.

He did see some action in the Steelers’ third preseason game, in which, for the most part, he looked relatively sharp, even if he did have a fumble when he seemed to lose his footing on an ugly turf field following a reception. Had it been in a regular season game, it would have been only the second fumble of his career.

Bell concedes that he is probably not ready to step in 100 percent as of this moment, but told reporters, “it might take this whole week to get adjusted, but I will be ready when the game comes around”. Of course, the Steelers will have an amply qualified running back in DeAngelo Williams to substitute him if he struggles to get himself re-acclimated in the heat of battle.

He was asked during the interview what sorts of things that he feels he needs to adjust to as he transitions from working out individually and back into a team dynamic in an environment in which every snap is meaningful.

“The whole tempo [of the game]” is the first point that he brought up in a list of notes that included “making sure I am aware of third-down situations, if it is second and one make sure I get the first down”, as well as “getting hit for a whole game”.

Bell told reporters that he feels he is a better player now than he was two years ago when he was an All-Pro, and he also talked about how he has continued to grow on and off the field, again expressing remorse over the distraction of his second suspension. But he said that he is ready to put it all behind him and to focus move forward, both on the field and in his personal life.