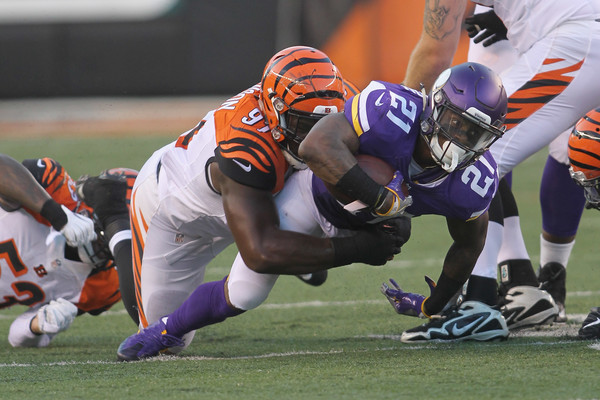 The Cincinnati Bengals went looking for help along the defensive line for depth purposes during the 2016 NFL Draft, and they came away with defensive tackle Andrew Billings in the fourth round. Unfortunately, a knee injury that he suffered during the offseason ended his rookie season before it began, and he was placed on injured reserve.

The Bengals were holding out hope that fifth-year veteran Brandon Thompson would be able to return from a late-season injury that he suffered in 2015 at this point, but they knew that such a hope was a very optimistic one.

Thompson spent all of training camp on the Active/Physically Unable to Perform List, and in their trimming down to 75 players, the Bengals moved him to the Reseve/PUP List for the regular season, which requires that he sit out at least the first six games before he is eligible to resume practicing or return to play a game.

While the team of course has Geno Atkins, a first-team All-Pro, and longtime veteran Domata Peko in the starting lineup, and they also recently re-signed veteran reserve Pat Sims, Thompson and Billings would have been their top choices next to Sims to serve as rotational depth, which is key for a 4-3 front.

That means that Marcus Hardison has an opportunity waiting in front of him, a second-year player who never saw the field during his rookie season, nor was he active for a game. a 6’3”, 310-pound product of Arizona State, Hardison was the Bengals’ fourth-round draft pick in 2015, and now they need him to play.

The only other healthy defensive tackles on the roster are a pair of undrafted rookies who have done little to nothing to distinguish themselves over the course of the preseason. Hardison by reports played pretty well for himself, and recorded three tackles, all solo, during his playing time.

The Bengals are counting a lot on their young depth this year, and that includes rotational defensive ends such as Margus Hunt and Will Clarke, who are two of just five defensive ends that they have now remaining on the roster.

Both were former high draft picks in recent years that have not made major contributions yet, as Cincinnati has preferred to rely on more veteran players along their rotation. But they lost their veteran rotation over the course of the offseason, and it is now time for their young draft picks to step up.

Hunt, Clarke, Hardison, and hopefully Billings next year represent the next class of a Bengals defensive line that is beginning to get old in the teeth. Peko is 31 and Michael Johnson will turn 30 early next year. And they’ve already left Johnson go once before.

This could be a pretty important season for the team to see what they have behind their starting players, as at least one or two of them will need replacing not long from now. Peko especially, and Billings’ drafting was with an eye toward just that fact.