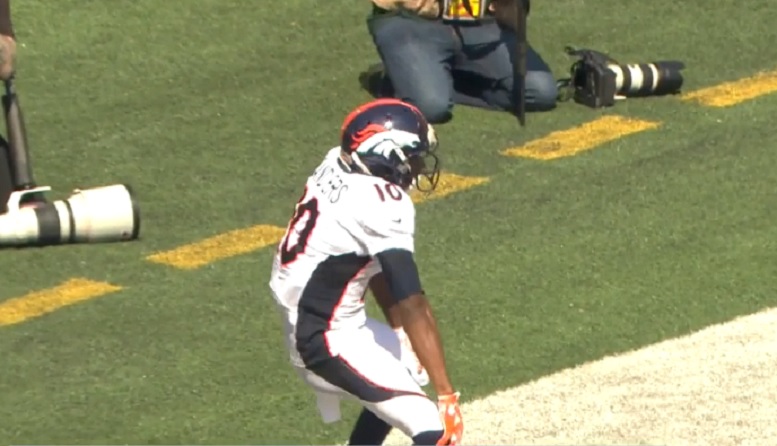 If you caught the Week 3 game between the Denver Broncos and the Cincinnati Bengals, or at the very least saw the highlights, you saw that wide receiver Emmanuel Sanders had a great game as the former draft pick of the Pittsburgh Steelers caught 9 passes for 117 yards and two touchdowns in the contest.

After scoring his first touchdown against the Bengals, Sanders post-score celebration included him twerking just as Steelers wide receiver Antonio Brown did following a score in the Week 1 win over the Washington Redskins. While Brown was subsequently fined for his twerk, Friday reports indicate that Sanders has gotten off scot-free for his. Was this a result of Sanders doing just two pumps during his twerk as opposed to the multiple pumps that Brown did during his post-score expression of happiness? It’s really hard to say.

Sanders wrote about his celebration on Thursday:

My first touchdown of the 2016 season was a long time coming.

I hadn’t scored a touchdown in like eight or nine weeks. So, naturally once I found the end zone, I had to do something special.

When I finally scored on a 41-yard reception from Trevor Siemian, I was just ecstatic. I was so excited. I remembered that one of my ex-teammates with the Pittsburgh Steelers, Antonio Brown, had been popping it after he scored. So, I was like alright let me go ahead and bust out a twerk — but only two pumps. I sent it to him after the game, and he was just like, “Man, you’re crazy.”

According to the NFL bylaws, celebratory actions that are “sexually suggestive or can otherwise be construed as being in poor taste” fall under the category of “unsportsmanlike conduct.” If that is indeed why Brown was fined for his twerk, then one would think that Sanders homage to Brown should have been fined as well. That is, of course, unless there is a pump limit involved and being as CBS cut away quickly, I’m really not sure if Sanders stopped after two pumps, but will take his word that he did.

The only real difference between what Sanders and Brown both did is the number of pumps and the fact that the former discarded the football prior to twerking.

It appears as though Sanders may have mocked or payed homage to Steelers running back DeAngelo Williams as well after scoring his second touchdown against the Bengals. As you can see below, Sanders bows after scoring which is something Williams has made a habit of doing for sometime now.

Now, I have no beef with Sanders here as I love watching players celebrate touchdowns. With that said, I am curious as to why Sanders wasn’t fined. Perhaps he knew the secret two pump rule that Keegan-Michael Key and Jordan Peele brilliantly mocked a few years ago during a skit on their show.