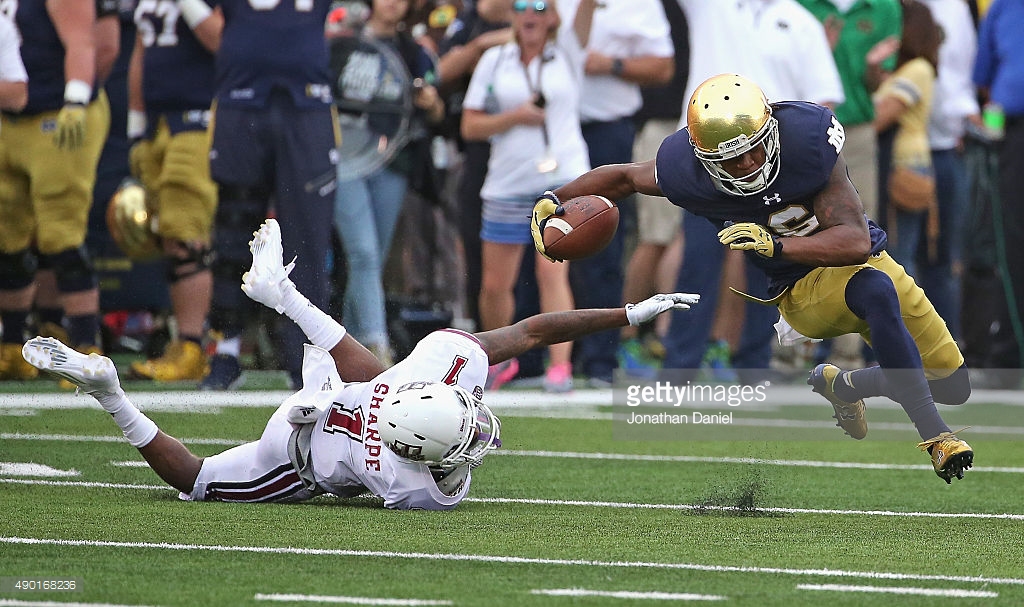 One of the seemingly more bizarre transactions that has taken place around the NFL since the regular season began was the Kansas City Chiefs’ released of rookie third-round cornerback KeiVarae Russell in what the team later described as a “football decision”.

That the Notre Dame product was claimed by the Cincinnati Bengals off waivers, whose waiver claim is just one ahead of the Pittsburgh Steelers’—and which netted them William Jackson III in the first round rather than Artie Burns—makes it all the more relevant to our interests here.

Not that we should anticipate seeing him active later today against Pittsburgh, as he is just one of seven cornerbacks they currently have on the roster, and they are also getting Darqueze Dennard back from injury after their slot cornerback missed the season opener.

Russell became the low man on the totem pole for the Chiefs when fellow rookie cornerback, sixth-rounder D.J. White, surpassed him on the depth chart. White was active for Kansas City in their season opener, and Russell was waived after the game in order to re-sign outside linebacker Dezman Moses.

This is vaguely reminiscent, yet not entirely parallel to the situation that the Steelers faced back in 2010 when they drafted three linebackers, one of which was eventually pushed inside, that being Stevenson Sylvester. Second-rounder Jason Worilds became the top backup, but fourth-rounder Thaddeus Gibson was inactive and low on the list. Sylvester played outside for the rest of that season.

When injuries at another position created a need for a roster spot, Gibson was the one to be released, in spite of the fact that he was a fourth-round draft pick. Russell, too, was released due to need at another position, as the last on the depth chart at a deep position.

The Bengals, too, have a deep cornerback position, without even considering Jackson, who can return late in the year. With starters Adam Jones and Dre Kirkpatrick in place and Dennard returning, Cincinnati still has Josh Shaw, who worked in the nickel during the opener, and veterans Chris Lewis-Harris and Chykie Brown.

Russell may find himself waived once again later on in the season if the Bengals believe that they can get him onto the practice squad. They will need a roster spot in just a couple of weeks when linebacker Vontaze Burfict is activated from the suspended list, and having seven cornerbacks obviously makes him vulnerable to be the one released.

Another likely candidate to be waived to open that roster spot, however, is quarterback Jeff Driskel, yet another rookie draft pick whom the Bengals claimed off waivers. Cincinnati is about as well-off as any team in the league with their top two quarterbacks, and have shown in the past that they have no qualms about carrying only two.

Of course, there is the open question of whether or not the Steelers would have been interested in Russel had he gotten by the Bengals. Pittsburgh has claimed, signed, or traded for an off-roster cornerback every year for the past five years, and they still only currently have four healthy cornerbacks on the roster. If the Bengals do try to move him to the practice squad at some point, we may be able to find out if the Steelers are interested.