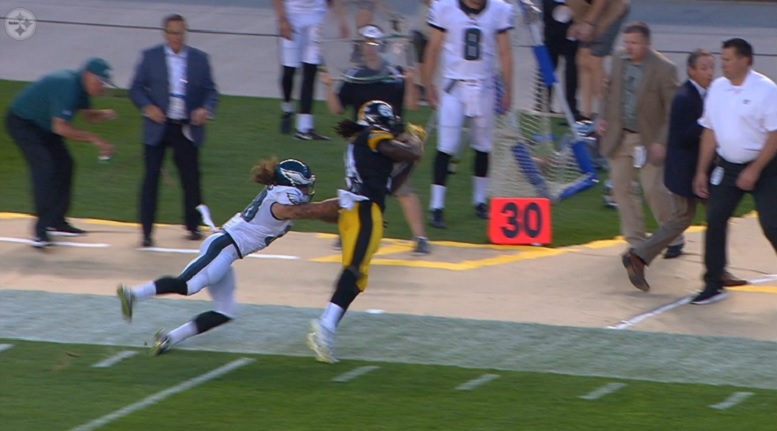 The Pittsburgh Steelers offense didn’t give head coach Mike Tomlin a lot to be happy about in the team’s 17-0 preseason loss to the Philadelphia Eagles at Heinz Field. However, Tomlin did praise a few of the team’s young wide receivers for their play after the game was over with the primary one being second-year Louisville product Eli Rogers.

“I thought we showed some quality things in spots,” said Tomlin during his post-game press conference. “I thought Eli Rogers did some things early on in terms of working the interior of the field and winning possession downs.”

Rogers, who missed his entire rookie season due to a foot injury, caught 4 passes for 39 yards Thursday night against the Eagles and at this point it would be shocking if he doesn’t ultimately make the team’s final 53-man roster because of his play so far during the preseason.

The other young wide receiver who received some praise from Tomlin after Thursday night’s loss was Sammie Coates, who the team was hoping would bounce back this week after fumbling twice in the preseason opener against the Detroit Lions.

“I thought he did some nice things,” said Tomlin of Coates, the team’s third-round draft pick last year. “I’ll look at it in terms of the strict detail before I give him a passing grade, but he made some plays, no doubt.”

Coates ended Thursday night’s game against the Eagles with just 2 catches for 30 yards with one of those grabs coming along the sideline and included some nifty toe-tapping. The catch was originally ruled incomplete and out of bounds but was ultimately overturned after Tomlin challenged the ruling on the field.

While Tomlin didn’t mention him after the game, young wide receiver Cobi Hamilton also did some nice things Thursday night as his four-catch, 44-yard performance included him making a spectacular grab along the far sideline with a defender draped all over him.

Hamilton, however, did have a bad drop earlier in the game and also failed to come down with a pass in the end zone in the first half from quarterback Landry Jones. That pass was ultimately intercepted.

As expected, the Steelers decided not to play their top two wide receivers Thursday night as Tomlin decided to hold Antonio Brown and Markus Wheaton out of the preseason game. While Brown is healthy, Wheaton has been nursing a lower leg injury for nearly all of training camp.