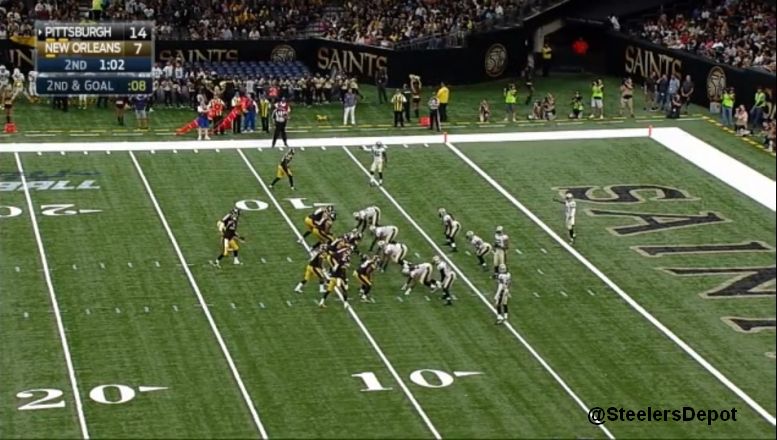 That is, if my records are correct, the first touchdown Coates has scored since training camp last season. He didn’t have one last preseason or in camp this year and was shut out the first two games.

So it was nice to see him find pay dirt last night against the New Orleans Saints, an eight yard touchdown at the end of the second quarter. But it was the scheme, a Todd Haley favorite, that created the score. Let’s take a look.

The concept is a snag route. It’s a three man combination consisting of a flat, corner, and curl (snag) route. Here’s the full concept the Steelers ran. 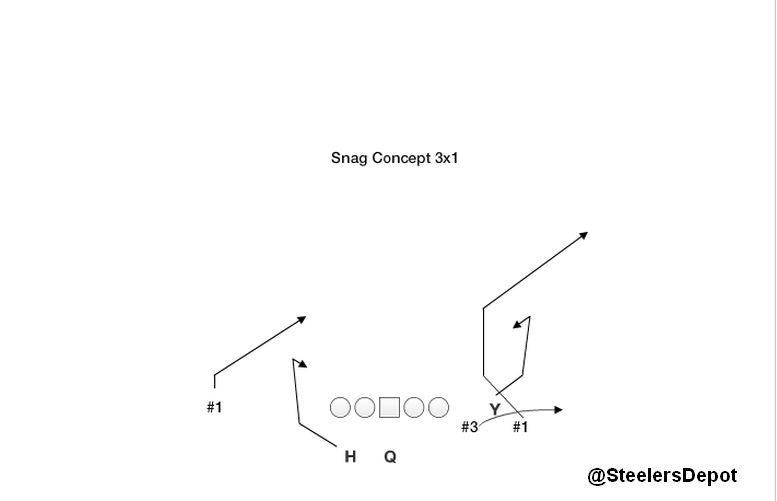 And here is the pre-snap TV look at it. Xavier Grimble on the snag, Eli Rogers to the flat, and Coates on the corner. 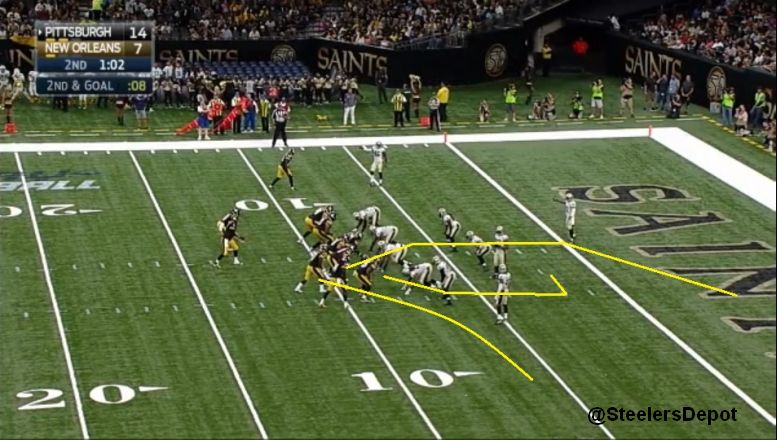 The Saints are in Cover 1 with their defensive backs rolled up, not willing to give up any space near their own end zone.

Typically, the first read is the snag, the curl route. If the defense is in zone, it’s usually a completion with the tight end finding grass and sitting down. The quarterback reads the playside linebacker and if he expands to the flat, the snag will usually be open. If not, or he’s out-leveraged, the quarterback may look for the flat.

With the Saints in man coverage, both options are well-defended and taken away. 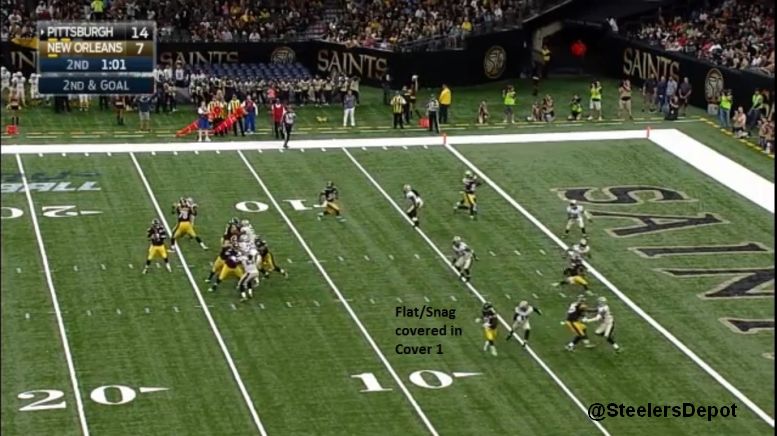 So Landry Jones has to work to his third read, Coates on the corner. And it’s open.

You can credit much of the separation to design and Coates selling the route with his stem. He released with an inside stem, crossing under Grimble and over Rogers before. This, plus the initial heavily reduced split, creates space – that’s the key word here – for the corner route. Can’t run this route standing on the numbers. Have to move inside and get room to work with. 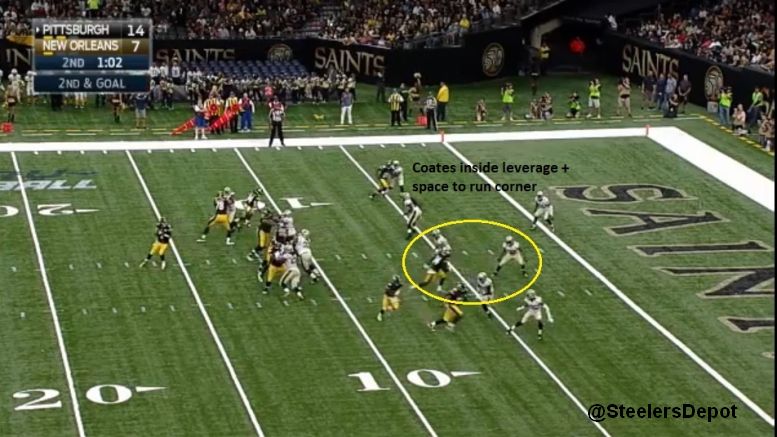 From here, it’s a simple matter of leverage. The defensive back responsible for Coates is playing with inside leverage and opens his hips, not even having the chance to bump the receiver off his route. From here, Coates makes his cut and runs to the back pylon. The battle is over. It’s just a matter of a well-thrown ball.

And Jones finds him in stride for six. 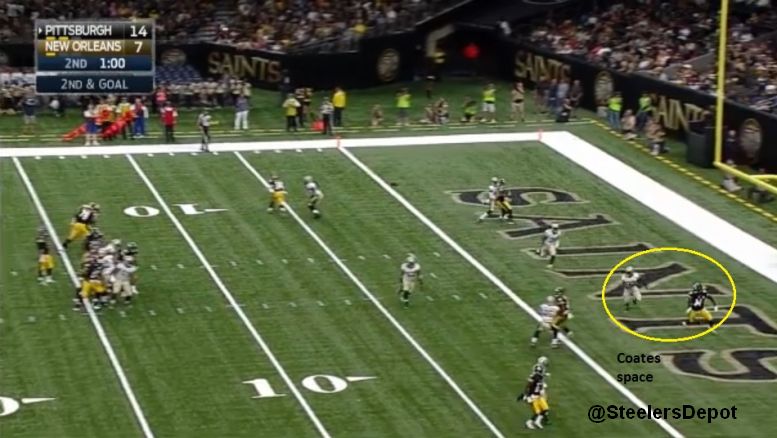 That’s how Denzel Washington responded in Remember The Titans.

This snag concept is one of his money plays around and inside the ten. The beauty, and the genius, is how Haley continues to invent new ways to run the same exact concept. No new assignments to learn. No new reads for the quarterback. A tried and true play, window dressed up ten different ways.

I touched on this last season. Here’s Haley running it from the same 3×1 grouping but with a more traditional, spread set to the trips side. Also on the eight yard line, just like last night. 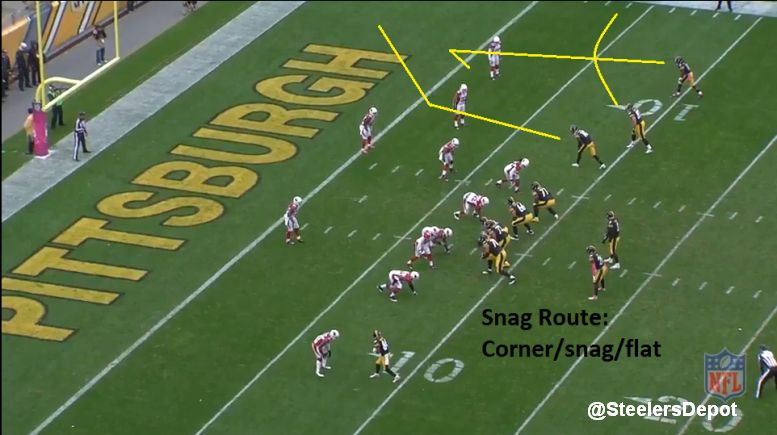 Here it is on a two-point conversion out of a 2×2 grouping against Seattle. You get basically the same look, a reduced split by #1 to the snag side, stemming inside to create space on the corner. Here, the back works as the flat defender, expanding the linebacker horizontally. 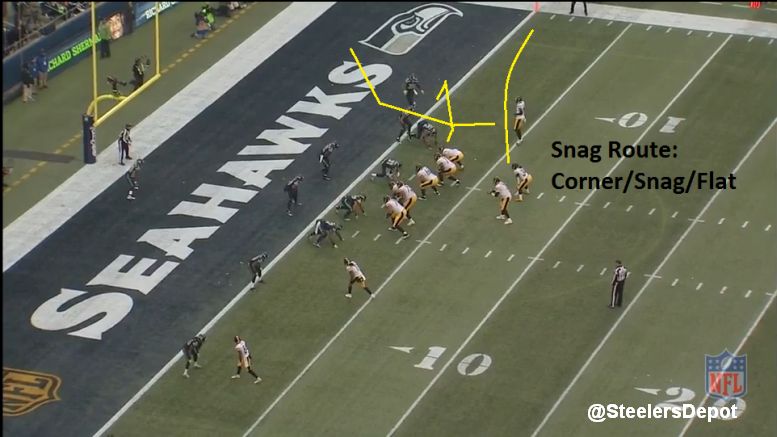 Heck, the corner would’ve been open on that play but with Seattle in zone, Ben Roethlisberger smartly fired the snag to Jesse James.

And now we’re seeing it from this bunch look. It gives the illusion of a whole new look. In reality, it’s the same money play.