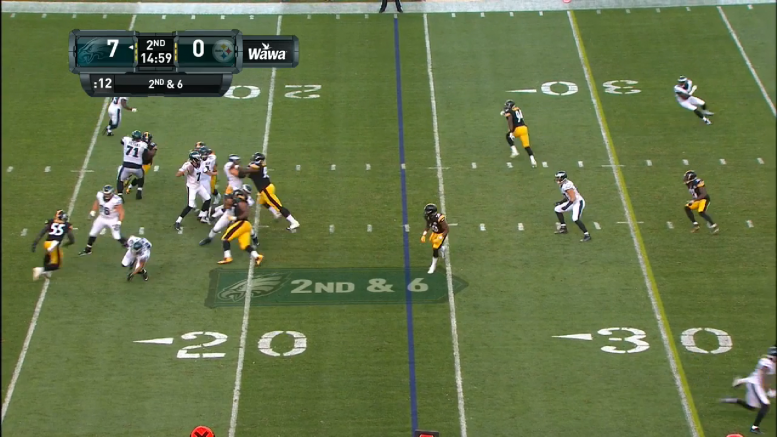 During the Pittsburgh Steelers’ first preseason game, the coaching staff evidently wanted to give third-year nose tackle Daniel McCullers a very long spell. If I recall, he played around 40 snaps in the game, and his level of effort and execution, as you might expect, wavered quite a bit in that span of time.

It was certainly a lukewarm performance at best, and not one to embolden thoughts and visions of McCullers suddenly becoming a Pro Bowl player. But I found that his appearance in the second preseason game against the Eagles, during which he found much briefer encounters, much more to my liking, and perhaps more representative of what is to come in terms of usage rate.

The Steelers, as much expected, opened the game in their nickel defense, but after recording a run stop, brought in McCullers as the nose tackle in their 3-4 alignment. What followed was another run stop, and though he was not credited on the play, the nose tackle was certainly a core figure in the play. His quick penetration against the center helped funnel and seal the back into only one option on the play as the defense swarmed to stop him after one yard.

He did not play much for the rest of the first quarter—the offense actually dominated the time of possession in the first frame—but he was back on the field for the first play of the second quarter, this time working against the pass.

This play came out of the 3-4 defense, as traditional and prototypical of the Steelers as you might think. The Eagles did not think to put two blockers on McCullers, and the result was him sending the center hopping backward into the pocket, though the quarterback was able to get the throw out in the nick of time. Still, this is what the coaches would like to see consistently.

Late in the first half, McCullers did find some work, in fact, in the nickel defense, pairing with his rookie competition, Javon Hargrave. Aligned as the left defensive tackle in this situation, the two down linemen stunted, with McCullers crossing in front of Hargrave, and actually showing decent speed in doing so. He had gotten about five yards beyond the line of scrimmage before the pass was thrown, though he ended up on the ground as his feet got tangled in traffic.

Still later in the game, midway through the third quarter, McCullers was still playing, again in the nickel, but this time with new teammates and new opponents. Still, without a double-team, the result was the same, as he bulled the center back in the pocket and forced a check-down pass.

What we saw from Daniel McCullers against the Eagles was much more positive than in his preseason debut. His play-to-play effort was improved overall, and he also found more success in collapsing pockets. He now must continue to build on what he showed in this game going forward.