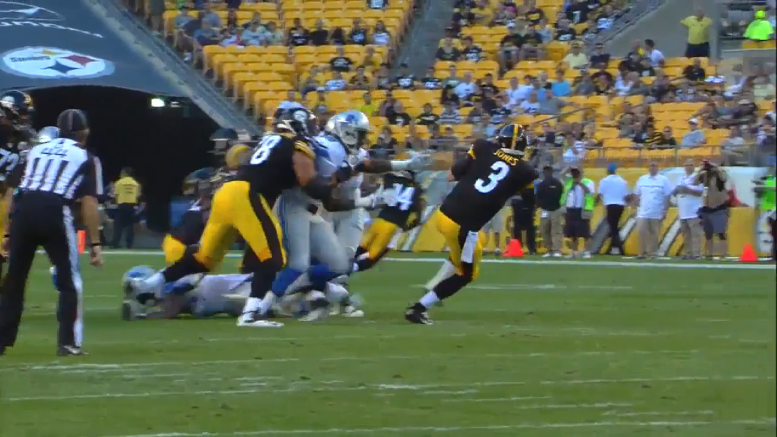 If you were watching the Pittsburgh Steelers’ preseason opener against the Lions on Saturday night awaiting the coronation of the team’s new ‘left tackle of the future’, then you likely came away with a bad taste in your mouth as second-year tackle Alejandro Villanueva struggled in his first action of the year.

Of course, nobody should have been expecting him to be flawless, as he still has a lot to learn. Villanueva has all the physical assets to be a left tackle, but for as much enthusiasm as there is out there surrounding him, he is still decidedly a work in progress, as evidenced by his handful of snaps late last week.

On his first snap of the game, he slipped trying to reach the rusher coming off the edge after releasing from the chip block of the tight end. Two plays later, he drew an illegal hands to the face penalty as the rusher came across his face.

On the next series, the Steelers began the drive with a sack after he had his hands slapped down by the rusher coming in from a seven-tech stance, crossing his face and slipping inside of him. Villanueva tried to prevent the sack by holding, but the penalty was not called.

The remainder of his 10 or so snaps were relatively uneventful and unremarkable, highlighted neither positively nor negatively, which is certainly not the last thing you would want to hear from your presumed starting left tackle, but Villanueva acknowledged after the game that he was disappointed with his performance.

Of course, what else could you really expect from a decorated Army Ranger who falls short of perfection? It is that sort of discipline and objective self-evaluation, and the drive to correct it, that drives forth the belief more than anything else—other than perhaps his sheer size—that he has a future in the starting lineup.

Not that he was given a free ride to that position, after the Steelers brought in veteran lineman Ryan Harris to compete with him, but the journeyman has yet to distinguish himself, and did not do so against the Lions, either.

As DKPittsburghSports.com reported yesterday, Villanueva told reporters that he felt he “had a really bad game”. He called it “a very sloppy performance”, and reflected on how the actual games never quite compare to what you spend your time preparing for during the offseason.

“In football you spend six months playing football and six months speculating as to what football is going to be like, and in this case, I just had it all wrong. I’ve just got to go out there and play better”, he said.

He also told reporters that he felt he was thinking too much on the field, and acknowledged that he is still learning the game, after spending now a little under two years working back at tackle. Every rep is a valuable lesson as he furthers his game.