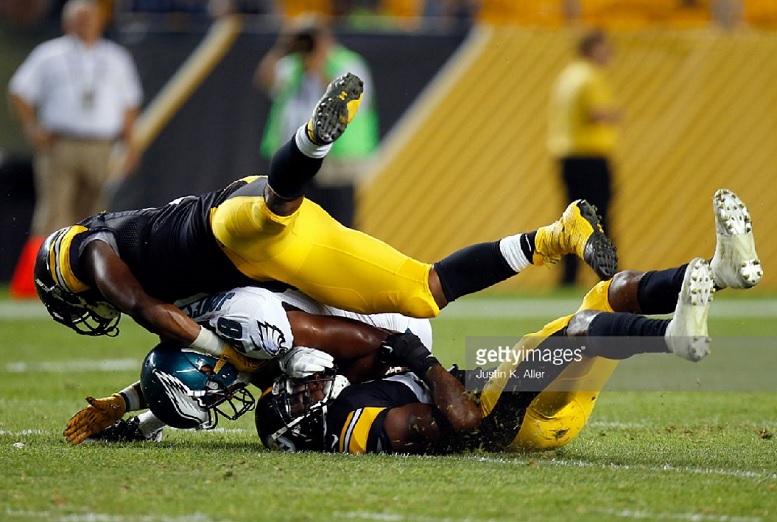 With one preseason game remaining for the Pittsburgh Steelers, most of the team’s 53-man roster appears to be set in stone with very few spots appearing to be up for grabs. With that said, below I have identified seven players who I believe are currently on the proverbial roster bubble as the team prepares for their Thursday night preseason finale. I also have included snap totals played so far by each player during the team’s first three preseason games along with the stats registered by each.

ILB Steven Johnson – Snap Counts: (DEF50 ST41) – Johnson was signed during the offseason to be a veteran presence on special teams in addition to providing depth at the inside linebacker position behind Lawrence Timmons, Ryan Shazier and Vince Williams. On the surface, Johnson appears to enter the final preseason game inside the roster bubble. He also enters the team’s final preseason game having already registered 6 total defensive tackles, 1 interception, 1 pass defensed and 3 total special team tackles of which 2 were assist.

ILB L.J. Fort –  Snap Counts: (DEF97 ST27) – Fort, who spent most of the 2015 season on the Steelers practice squad before finally be promoted to the 53-man roster in late December, has played well so far during the preseason on both defense and special teams. In the first three preseason games he has 10 total tackles on defense, 1 pass defensed, 1 quarterback hit and one special teams tackle. He currently appears to be right on the roster bubble with the inside track at claiming a fifth and final inside linebacker spot.

ILB Tyler Matakevich – Snap Counts: (DEF47 ST32) – Matakevich, a late-round draft pick this year out of Temple, has also played very well so far during the preseason. It should be noted, however, that most of his 47 defensive snaps played have come in the fourth quarter of games. So far during the preseason he has registered 7 defensive tackles, 1 interception, 1 pass defensed and two total special team tackles. Matakevich appears to be entering the final preseason game right on the roster bubble alongside Fort.

TE Xavier Grimble – Snap Counts: (OFF77 ST26) – Now that the Steelers have placed tight end Ladarius Green on the Reserve/PUP list, Grimble is firmly planted inside the roster bubble with one preseason game remaining. At this point, Grimble’s only competition probably comes from outside of the organization. While very inconsistent in the team’s first two preseason games, Grimble played reasonably well in in the third preseason game and one more above-the-line performance Thursday night should result in him becoming a roster lock. Through three preseason games, Grimble has caught 2 passes for 26 yards with a drop and 2 penalties against him. He also has 2 total special team tackles with 1 of those being an assist.

CB Montell Garner – Snap Counts: (DEF72 ST9) – Even though only 4 cornerback spots are spoken for entering the final preseason game, Garner still needs a lot of help when it comes to him making the final 53-man roster as the team also needs to carry the injured Senquez Golson before placing him on Reserve/Injured in the middle of next week. While Garner has played quite a few defensive snaps during the preseason in the slot, the fact that he’s only played a total of 9 special team snaps in the first three games is very telling, in my opinion. When you consider that the team is likely looking very close at adding another cornerback outside of the organization in the coming week, you have to view Garner as a player who is outside the roster bubble. To date, Garner has 7 defensive tackles and a forced fumble during the preseason with no tackles on special teams.

CB Al-Hajj Shabazz – Snap Counts: (DEF68 ST30) – What I wrote about Garner probably holds true to Shabazz as well with the only real difference being that he has received quite a bit of burn during the preseason on special teams to the tune of 30 snaps played. That amount is three-times more than Garner has played. If Garner is currently deemed as being outside the roster bubble, then it’s easy to speculate that Shabazz is just inside of him with one preseason game remaining. While Shabazz only has 4 defensive tackles so far during the preseason, he does have 2 passes defensed in addition to 1 special teams tackle.

S Jordan Dangerfield – Snap Counts: (DEF73 ST34) – With fellow safety Shamarko Thomas currently nursing a groin injury and thus not expected to play in the team’s preseason finale Thursday night, one can easily speculate that Dangerfield still has a shot at making this year’s final 53-man roster should the team indeed wind up carrying 5 total players at the position. As you can clearly see, Dangerfield not only has logged a ton of playing time at safety so far during the preseason, his special team snaps played is also up there. Even so, he’s yet to register a special teams tackle so far during the preseason in addition to only having 5 total defensive tackles. Dangerfield’s potential competition for a roster spot could very well come in the form of a player not currently on the team. Additionally, if Thomas’ injury heals quickly, Dangerfield could be battling final position numbers as well. For all of the reasons I just outlined, Dangerfield must currently be considered as a player who is just outside the roster bubble.