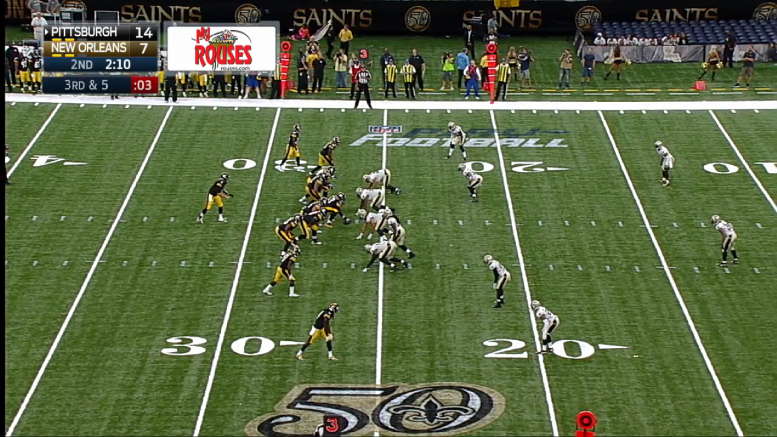 It took until the third preseason game, but Pittsburgh Steelers fans were finally able to see Le’Veon Bell in game action for the first time since his knee injury suffered last November 1.

Against the New Orleans Saints, Bell touched the ball eight times (three rushes, five catches) for a total of 58 yards (7.25 yards per touch).  Not bad for a guy seeing live game action for the first time in almost 10 months.

Despite running the ball just three times in limited action, Bell put on quite the performance that has fans hoping for another great year from number 26 in black and gold.

Bell’s first carry since he went down against the Cincinnati Bengals is a classic Bell-like run.

As the sidecar left in shotgun next to Ben Roethlisberger, Bell gets the handoff on a zone run to the right, where the fourth-year running back finds the crease and hits it for the big gain.

Bell is patient at the start, allowing the blocks to develop like he usually does before then hitting the seam quickly and keeping his pads level, allowing him to get up the field quickly.

The run showed no ill affects of rust, which is a great sign for the Steelers.

Lined up in a more traditional single back formation, Bell is tasked with picking up the one yard needed to move the chains in the red-zone for the Steelers.

At the snap, things look a bit congested in front of Bell, but by being patient and bouncing to his right a few yards, he allows himself to plunge forward for the first down with ease.

For some running backs, this play would just require them to pound straight into the line of scrimmage and pick up just one yard. Most are taught to just put their head down and plow forward regardless of a hole, but what makes Bell different is that he’s so patient and has great vision, which allows him to search for the best route to the first down, which he does here.

Not many running backs in today’s game can do this.

On Bell’s final rush of the night, he’s lined up as the sidecar right to Landry Jones.

At the snap, Bell gets the handoff to the left in a similar formation that he got his first carry out of.

With David Johnson leading the way around left end, Bell is able to turn the corner quickly and get up the field.  Due to great blocking by the line and Johnson in front of his as the lead blocker, Bell doesn’t have to do much on this run besides get up the field and get out of bounds.

Overall, Bell looked solid on just three carries and showed some traits of a healthy Bell heading into the season. Although he’ll have to sit out the first three games of the year due to a suspension for missed drug tests, knowing what Bell can bring to the table once he returns has Steelers fans dreaming of another Super Bowl title.