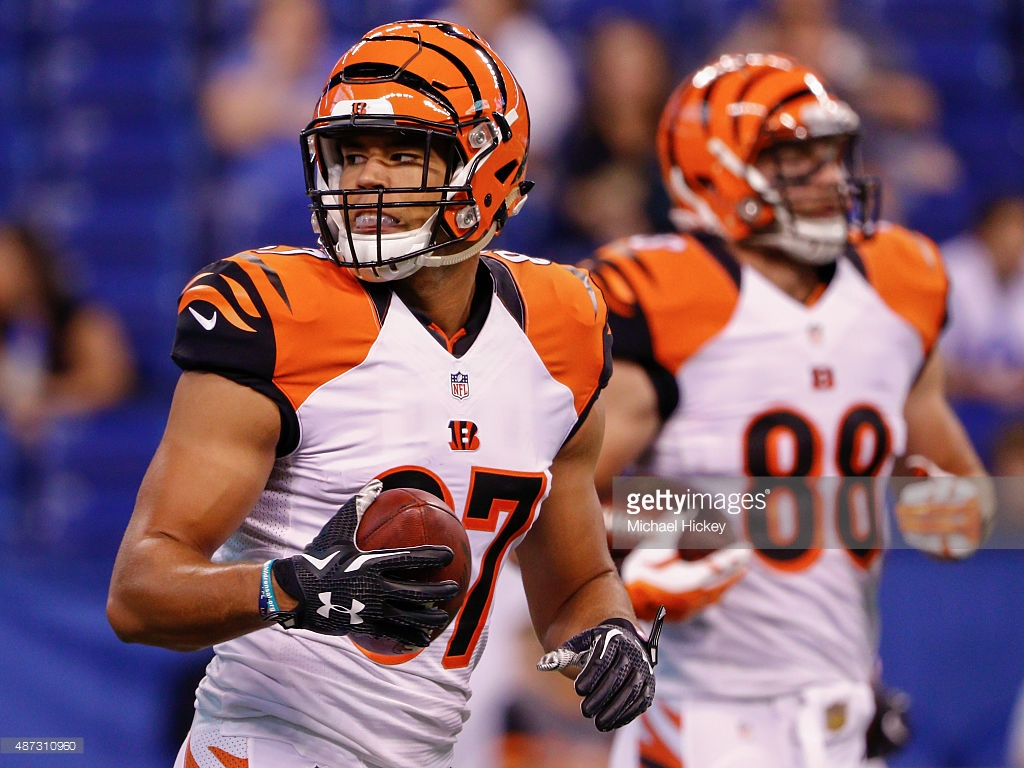 With the Steelers having their own troubles at the tight end position, the Cincinnati Bengals certainly have not been without. Their top two tight ends, Pro Bowler Tyler Eifert and second-year man Tyler Kroft, both remain sidelined, though h-back Ryan Hewitt has returned. In the meantime, fellow second-year tight end C.J. Uzomah has reportedly made the most of his reps.

Uzomah may be a name familiar to you if you follow the Steelers, as he was one of several tight ends that Pittsburgh brought in for a pre-draft visit in the build-up to the 2015 NFL Draft before they ended up selecting Jesse James in the fifth round, a Penn State product, and thus a local visit that did not count against their 30 allotted visitors.

The Bengals ended up drafting Uzomah just five spots ahead of where the Steelers took James, though James proved to be the bigger contributor of the two during their rookie seasons. In spite of the fact that he spent the first half of the year on the inactive list, James did end up with eight regular-season receptions for 56 yards, a touchdown, and a successful two-point conversion reception. He also caught a 22-yard pass in the playoffs.

Uzomah, meanwhile, saw only 48 offensive snaps during the season, behind Eifert, Kroft, and Hewitt, in addition to using an extra lineman as a tackle-eligible tight end. He caught just one pass for four yards, but it did come on a fourth-and-two situation.

Training camp reports about Uzomah have been quite positive, and reporters even called him the player of camp so far in asking quarterback Andy Dalton about his second-year tight end, to which he replied that that may well be the case.

While Uzomah is not likely to fly up the depth chart ahead of Eifert or Kroft, at least when they are healthy, nor does he offer the versatility of Hewitt, whom the Bengals recently signed to a contract extension, his advancement over the course of this training camp period is still an important development for the team.

As good as Eifert has been on the field when he has been healthy, he has too often been sidelined by injuries, and that, obviously, makes it all the more important for the Bengals to have quality depth behind their Pro Bowl tight end.

Kroft showed some potential to be that last year, catching 11 passes for 129 yards and a touchdown in limited playing time last year, but Uzomah is looking to show that he can also be relied upon to be used in two-tight end sets, or even heavy sets with three tight ends without the need of moving around offensive linemen.

The 6’6”, 265-pounder out of Auburn was not a significant offensive contributor in college, and perhaps won’t be in the NFL either, but if he can secure the depth chart, he will be an investment well-made—perhaps one the Steelers would have invested in if he lasted three more picks.