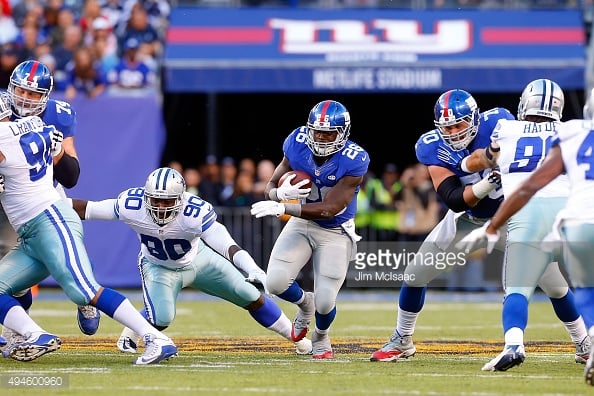 I’ve been trying to write out my thoughts on Le’Veon Bell for the last 30 minutes. It has essentially been me writing and deleting every sentence, an online version of an Etch a Sketch. So yeah, hasn’t gone well.

But Dave Bryan made a really solid point on the podcast today. There’s certainly a possibility the Pittsburgh Steelers add a running back to serve in that #3 role for at least the first month. Of course, that search begins internally and the team has some interesting in-house options, perhaps led by Daryl Richardson. But if the team isn’t happy with any of those options, no one pans out, here are several potential waiver-wire options to keep an eye on.

None of these names are sexy. They’re not supposed to be. They exist just to ensure the team can get through the first month of the season. Welcome to reality.

Orleans Darkwa – Not just a candidate for the best name of this list, he may be the guy who makes the most sense. He ran well with the Giants last season, averaging 4.3 yards per carry on 36 carries. He also registered 333 special teams snaps with the GMen and you figure the #3 running back is going to have to demonstrate some special teams value. Darkwa offers that.

He could still make the Giants but they did draft Paul Perkins, who is likely to make the squad along with Rashad Jennings and Shane Vereen.

Donald Brown – Currently with the New England Patriots, there’s certainly no guarantee he makes the roster. LeGarrette Blount, James White, Dion Lewis, and Brandon Bolden all seem to have better chances. Brown is nearing the end of his career but still hasn’t turned 30 and ran decent behind an ugly San Diego Chargers’ line last season. He’s capable of being an all-situations back, someone who can block and catch. Plus, Pittsburgh really seems to love signing ex-Chargers.

Travaris Cadet – Known as a receiver more than runner, he reminds me of Mewelde Moore. Cadet caught 38 passes in 2014 and another 17 last year. He also has a kick return background. C.J. Spiller has been soured on but he could stick and rookie Daniel Lasco put together some strong tape when healthy. Feels 50/50 if Cadet cracks the roster or not.

DuJuan Harris – Harris spent time with the Steelers, though it was virtually the shortest stay anyone could have. Just four days back in 2012. He’s been a football nomad ever since, bouncing around from Seattle to Baltimore before finally landing with San Francisco last season. He averaged over five yards a carry albeit in limited work.

David Cobb – Cobb has the lightest NFL resume of this bunch but he was a really intriguing player coming out of Minnesota. Now, after signing DeMarco Murray and drafting Derrick Henry, Cobb may already be on his way out. From a long-term perspective, Cobb would be the best guy to add into the mix though from a short-term value, he may not bring a ton.

Zac Stacy – The New York Jets traded for him last season but didn’t get much mileage out of him. He fractured his ankle and missed the offseason while on the mend. But he has the mold of a power back, 5’9 216, and has acted as a lead back before, carrying the ball 250 times with St. Louis in 2013.