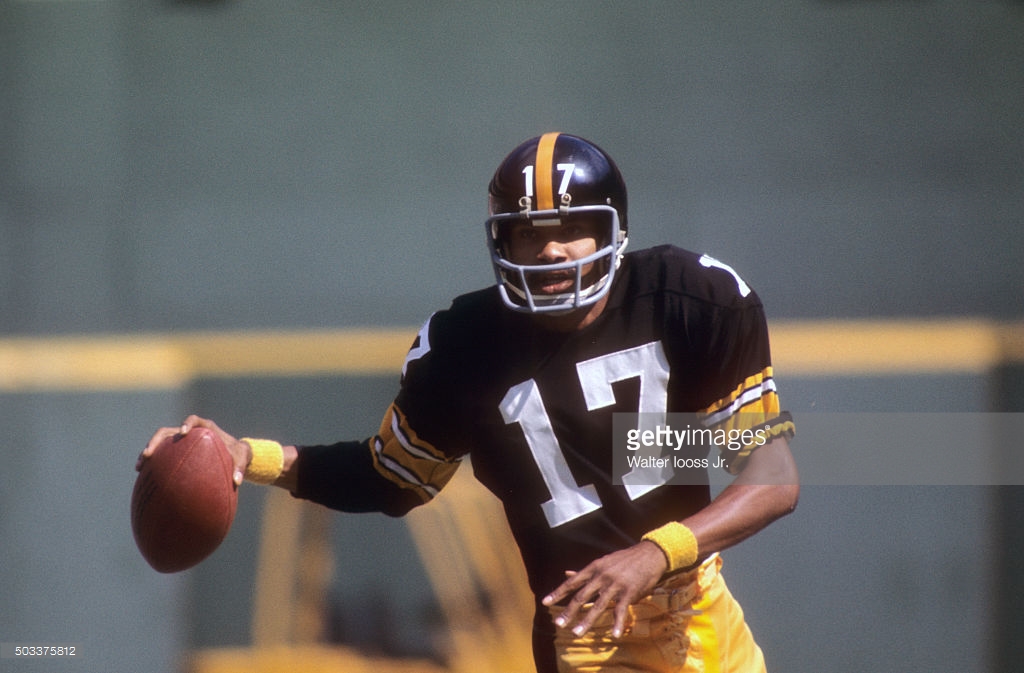 Let’s recap the top five worst games by a Steelers’ quarterback, dating back since 1960. We’ll go from #5 to #1, the worst one ever.

Bono wasn’t the opening act. But he would’ve been booed off the stage either way. Replacing an injured Bubby Brister, who had no better success either, Bono averaged 3.5 yards per attempt. The Steelers had still found a way to hang around until he chucked a 75 yard pick six to Brian Washington in the third quarter, sealing the Steelers’ fate. The last line of defense, Bono missed the tackle and Washington waltzed in.

Ed Bouchette was covering the game, his snark still as true as it is today. A direct quote from the Pittsburgh Post Gazette.

Other than that, they played a heck of a ballgame.”

As Bouchette notes, Bono didn’t even play a half, making this accelerated ugliness all the more impressive. And I mean that in the worst way possible.

We’re fudging here a little bit but when you’re dealing with so much horrid play, rules just don’t seem to matter. Stewart started. Tomczak finished. Both were equal parts terrible, Stewart going 5/13 for 30 yards and a strip-sack touchdown, Tomczak 5/11 for 77 yards and a pick.

Offensive coordinator Ray Sherman, blasted for almost all of his lone season with Pittsburgh, was again given much of the blame. The outcry made Bruce Arians’ tenure look universally loved.

It was Dan Rooney who implied changes might need to be made. You know it’s bad when ownership chimes in with how disgusting the on-field product is. 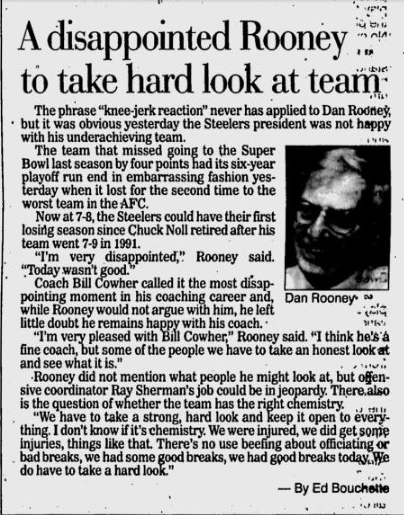 The numbers are painfully mediocre but not extraordinarily bad, something usually reserved for such a list. The context to this loss is what places this game on the podium. The Bengals finished ’98 just 3-13, with two of their wins coming against the Steelers. It was their first season sweep against Pittsburgh since 1990. They wouldn’t have another until 2009.

The photo is dark, the consequence of being photocopied and also, 1998, but the PPG plastered a shot of Kordell Stewart getting run over after a fumble. If comedy is tragedy plus time, this photo is Carlin-worthy. 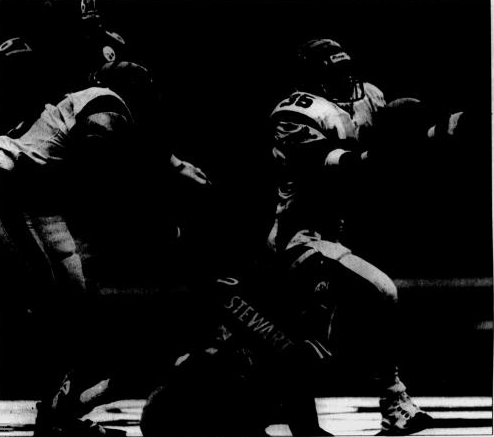 With the loss, Pittsburgh fell to 7-8, knocking them out of the playoff race and ensuring their first non-winning season since 1991. Pittsburgh would lose the next week to Jacksonville. Stewart failed to complete half his passes and was picked off twice in a 21-3 beatdown.

Bengals playing spoiler. It’s enough to send a chill down your spine.

Now we’re back to some pure nasty outings. Bradshaw’s performance combines a plainly awful game with a stomach-turning loss when viewed in context. This one was supposed to be a showdown. Pittsburgh entering the game 9-2, San Diego 8-3. The Steelers were four point favorites and I wish for mercy on anyone who bet the ‘Burgh. The 28 point defeat was the worst loss in the 70s dynasty era, 1972 to 1979.

By halftime, the Bolts led 21-7. Pittsburgh attempted to climb back, a 21-7 contest in the third quarter until Bradshaw threw a 77 yard pick six to Woodrow Lowe. Running backs accounted for 66% of Bradshaw’s 18 completions, making the only even semi-respectable number here tainted.

The Chargers’ gameplan was sound, taking away Lynn Swann and John Stallworth’s vertical attack. The Steelers had just two receptions that gained more than 20 yards.

An overly confident Steelers crashed to Earth. Everyone knew it. 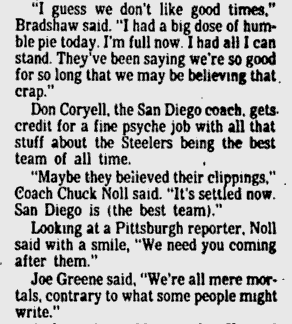 Now, we’re in for a treat. Only on this day for Steelers’ fans, this candy had a toothpaste filling. Gilliam’s career was a roller-coaster and this might have been the biggest individual dip in his career. He became only the second QB in Steelers’ history to fail to complete a pass with at least five attempts and only the second QB in history to throw 3 INTs without a single completion.

Coincidentally, the other one was also a Steeler, Ed Brown, who only sees compassion because of the awful team he was on and relative closeness of the game.

The final score may look close but that’s only thanks to the effort of Bradshaw, pressed into the lineup after missing the previous month with a separated shoulder. Gilliam lasted only a quarter, leaving Bradshaw and company to dig themselves out of a 20-0 hole. Bradshaw threw two touchdowns to rally the troops but it wasn’t enough.

Perhaps the only reason why this isn’t at #1 is because this was Gilliam’s first start. But it was arguably the worst debut in NFL history.

As this series continues, you’re going to see this game show up a lot. Obviously so. It was the worst loss in Steelers’ history. Not even the bumbling Pirates of 1933 could do worse, never losing by more than 47. This isn’t all Brister’s fault but he led the most sterile individual offensive attack any of you have probably ever seen.

Derek Hill led the team with 28 yards receiving. The Steelers’ offense as a unit had 53 yards. Brister was sacked six times and one of his interceptions was housed. Pittsburgh controlled the ball for fewer than 20 minutes. It was against Cleveland. That’s the dagger.

So is this headline. 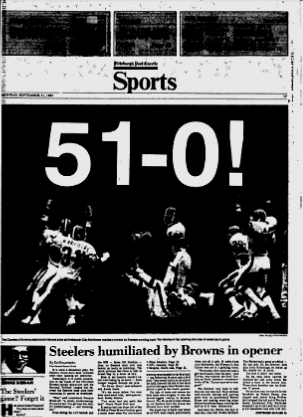 Defensive coordinator Bud Carson summed things up in a line.

“Maybe we’re just not that good.”

On this day, Brister was not only not good but the worst there ever was.