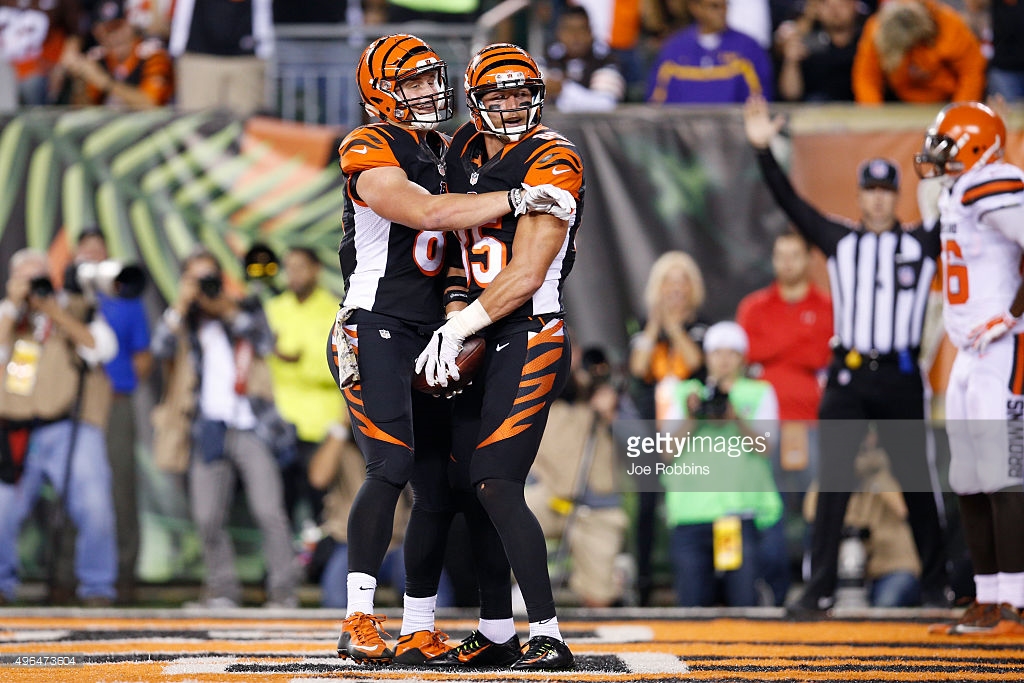 While the Cincinnati Bengals may have had to deal with the loss of some significant resources along the offensive side of the ball during the course of this offseason—in particular, wide receivers Marvin Jones and Mohammed Sanu, and offensive coordinator Hue Jackson—their cupboard is far from bare.

As I detailed last week, the offensive play-calling I believe is still in good hands with Ken Zampese, who has been with the Bengals since 2003 and has been with Andy Dalton on every step of his path in the NFL. They replaced Jones and Sanu with veteran Brandon LaFell and rookie second-rounder Tyler Boyd.

But I suspect that the offense will go beyond one-for-one changes, not simple swapping out a wide receiver for another here, another new coordinator there. And one of those changes that I believe we will see is a greater use of two-tight end sets—more specifically with second-year tight end Tyler Kroft.

And there is plenty of reason to support this belief, not the least of which being the fact that Ryan Hewitt, who logged the second-most snaps at the position last year behind Tyler Eifert, is seen as more of an h-back, and his receiving production has generally come from out of the backfield.

Kroft did log a more than respectable amount of playing time during his rookie season, though that was partially due to the time that Eifert missed last season. In 2015, Kroft saw nearly 350 snaps on offense all the while being a fixture on special teams for the Bengals, seeing over two thirds of their total snaps in that phase of the game.

The Bengals do value the ability to run with two tight ends, as they did in their brief opportunities to do so whenever both Eifert and former first-round Bengal Jermaine Gresham were healthy at the same time through Eifert’s first two seasons. But Gresham found a new home in free agency last year, and Cincinnati chose to restock through the draft with Kroft, as well as C.J. Uzomah.

As with the Pittsburgh Steelers’ Jesse James, Kroft was a big tight end who chose to forego his senior season in college, so the two of them essentially were still in school, so to speak, during their rookie seasons as professional players last year, but both were able to contribute to some degree by year’s end.

Kroft, a third-round draft pick, recorded just 11 receptions for 129 yards and a touchdown during his rookie season, numbers not at all dissimilar to the ones that James, a fifth-rounder, put up. His production also all came late in the season, in fact, from Week 12 and on, culminating in a four-catch, 46-yard game in Week 16.

For the role that he was asked to fill last year, the rookie did a good job. And with the passing offense somewhat in transition, it would be no surprise to see Kroft gain a greater role this year, including functioning in what may potentially be a more run-oriented offense, at least during the early stretches of the season.