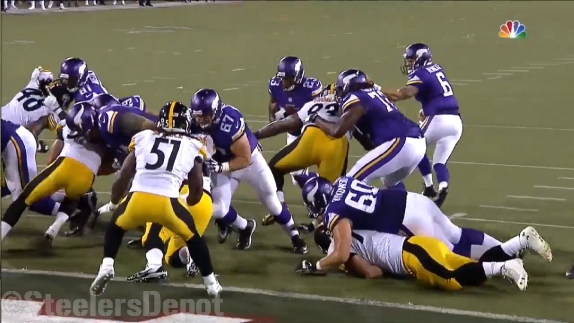 The Pittsburgh Steelers were in a bit of a rough spot entering the 2014 offseason along the defensive line. Just the previous season, they had an enviable amount of depth. But three of their linemen all hit free agency at the same time. Two left, the other was brought back late in the offseason to play a reduced role.

Ziggy Hood, the Steelers’ 2009 first-round draft pick, signed a four-year, $16 million contract with the Jaguars, a price that Pittsburgh was going to come nowhere close to signing, especially not with their vision in mind of relying more upon the front line for pass rush help.

Also signing elsewhere was Al Woods, who carved out a niche for himself in 2013, his last year with the team, as a player who could play anywhere, in the Chris Hoke mold. He played both defensive end and nose tackle, even starting at nose tackle if my memory serves, and he was also a capable three-technique in the nickel defense.

Woods signed a two-year, $4 million contract fairly quickly in the offseason with the Titans. He and Hood have both already signed new contracts this offseason. Meanwhile, the Steelers are still looking to replace them after trying to do so with Cam Thomas.

After trying to land Alex Carrington earlier in the offseason, the front office eventually was able to sign Thomas to a two-year, $4 million contract with a $1.5 million year-one cap hit. The goal seemed to be that he would be a placeholder starter until a draft pick developed. That is how it played out.

But Thomas never played out—or played, rather—the way the Steelers hoped, and he was at a very real risk of being released last summer. But partly due to injuries, he managed to make the roster, and played over 150 snaps over the course of the season.

It seems rather unlikely that the team would be interested in bringing him back, even if other teams—he visited with Seattle on Thursday—have shown a bit of interest in him. He was a starter at nose tackle for the Chargers for most of the 2013 season before signing with the Steelers.

With Steve McLendon also signing elsewhere, Thomas’ inability to become a fixture for the team has left them in a major defensive deficit, being dangerously thin along the defensive line outside of their two starting defensive ends, who, when healthy, logged over 85 percent of the team’s snaps last year.

Having Thomas still in the rotation as a player who could take some snaps away from their ends as well as play some effective snaps inside, both in a 3-4 front and in the nickel, would have the Steelers in a much better position than they currently find themselves. Instead, they find themselves back on the market, still looking as of this writing. They tried to woo Jason Jones, but he remains unconvinced.