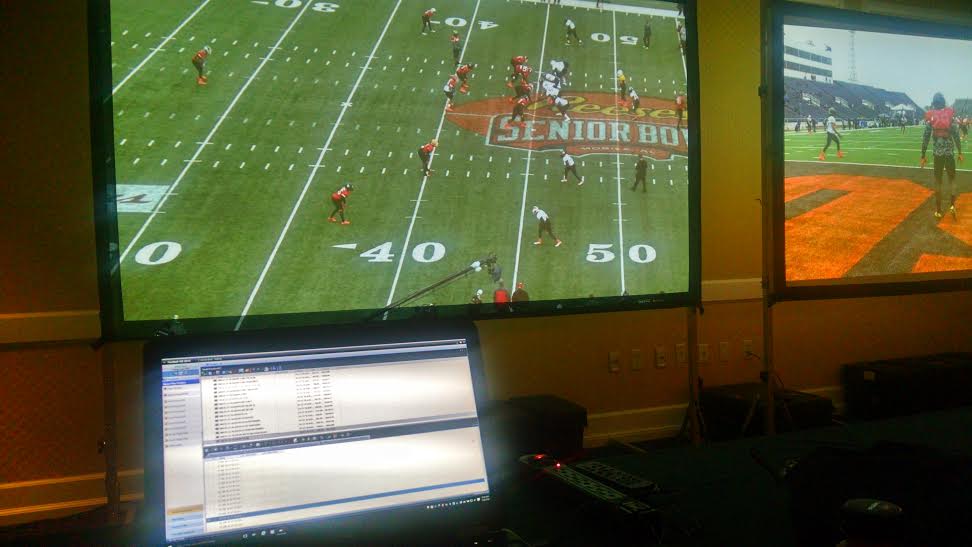 We’ve written a ton about the Senior Bowl and will continue to do so into next week. Still so much to cover. Wrap up podcast that will happen tomorrow night. Some final thoughts. Haven’t even touched transcribing the interviews I did early in the week. Look for that in the coming days.

But a treat, and real highlight for me, was the opportunity to watch All-22 tape of practice in the Riverview Plaza hotel. A room tucked away well behind radio raw on the second floor that you have no reason to walk past. But we heard about it and checked it out. Six huge projectors. A clicker to rewind with slow-mo. Free beer. The mancave of all mancaves. You have a glimpse of it in the photo in the article.

Specifically, I took a couple of notes from that practice based on what I heard from scouts around me. These come from yesterday and today, same random thoughts based on that much clearer look I was able to get from the end zone and aerial views.

– I didn’t watch any of DE/OLB Jason Fanaika before the Senior Bowl and still don’t know how I feel about his overall game. But he’s shown an impressive inside spin. Good technique, chopping the tackle’s inside hand down as he spins so the tackle can’t punch.

– I do like Kevin Hogan but there were some reads he was missing. Single high, four vert. Forced it to the safety’s side on the hash. Had the arm to fit it in for a completion but missed #2 to the field for what would’ve been a bigger gain.

– Some of the defensive line were knifing through on runs the but All-22 really opens up at least one contributing factor as to why. The North was asking their backside offensive lineman to reach without any help from the frontside. Very difficult assignment and predictably, a lot of these guys are struggling. Maybe it’s just to see if these guys are able to do it – and if they can without help, you know they can with it.

– Scout was getting on center Austin Blythe’s angle to down block the 2i Sheldon Day. Day had a great first step but Blythe could’ve done a better job.

– My view. Just a couple plays of it but Kyle Fackrell is solid with his run fills. Plays with good technique, getting proper leverage. Outside arm free on playside runs, spilling the runner inside if he hits the hole.

– Team drill rep. Lawrence Thomas, not known as being a pass rusher, beats a then-doubled over Kyle Murphy. Scout perk up and chips, “Look at that right tackle.”

– Man, I knew Hogan had a funky release but the All-22 really illuminates it. Ball is so far away from his body on his release. Fumble waiting to happen. Hard to shake that image out of his mind.

– Willie Beavers with playside run block and looked a mess. Can’t even describe it. Scout exclaims, “What the F%&! is that?!” Yeah, it was ugly.

– One scout was high on Temple DT Matt Ioannidis. Not ground-breaking for a scout to be high on a player, but fun hearing those guys talk about players. And after the week Ioannidis had, that scout is far from the only one. Same scout liked Aaron Burbridge’s physicality and effort as a run blocker. Nice crackback block from Wednesday’s practice. “I see you boy!”

– Film I saw on Josh Garnett left me mixed from his week in practice. Still high on him overall, especially talking to him on media day. He is an athlete who has a clean, tight pull when trapping and can get skinny through the hole. But mentally, he was screwing some stuff up. Missed assignment on a zone run, didn’t work to the playside linebacker, and on another, for some silly reason, went all the way down the line to tap the end spiking away. Trying to execute his zone block but no need if the defender is running away from you. You’ll never make it to the 2nd level in time that way.

But what I love above all are the mental reps he takes. In OL/DL, even when he isn’t directly involved in the rep, he’s still going through it mentally. Will set and punch on air as the tackle/defensive end next to him go at it. When he gets coached up or have a bad rep, he’ll move to the side and practice two or three times. Just a dude who is determined to get better.

– Baylor’s Jay Lee is a vertical threat but man, does he round his routes off in the worst way possible. Receivers were running 14-15 yard digs on air Wednesday, with their break point at about the 34-35. Lee broke his off at the 32. His route tree will be limited to about three concepts: streaks, bubbles, and speed outs.

– Charone Peake, Clemson, is another big dude who is incredibly sluggish out of his break. No separation. Has the size but not a ton else. Always worried about receivers who can’t separate. Not many work out in the NFL.