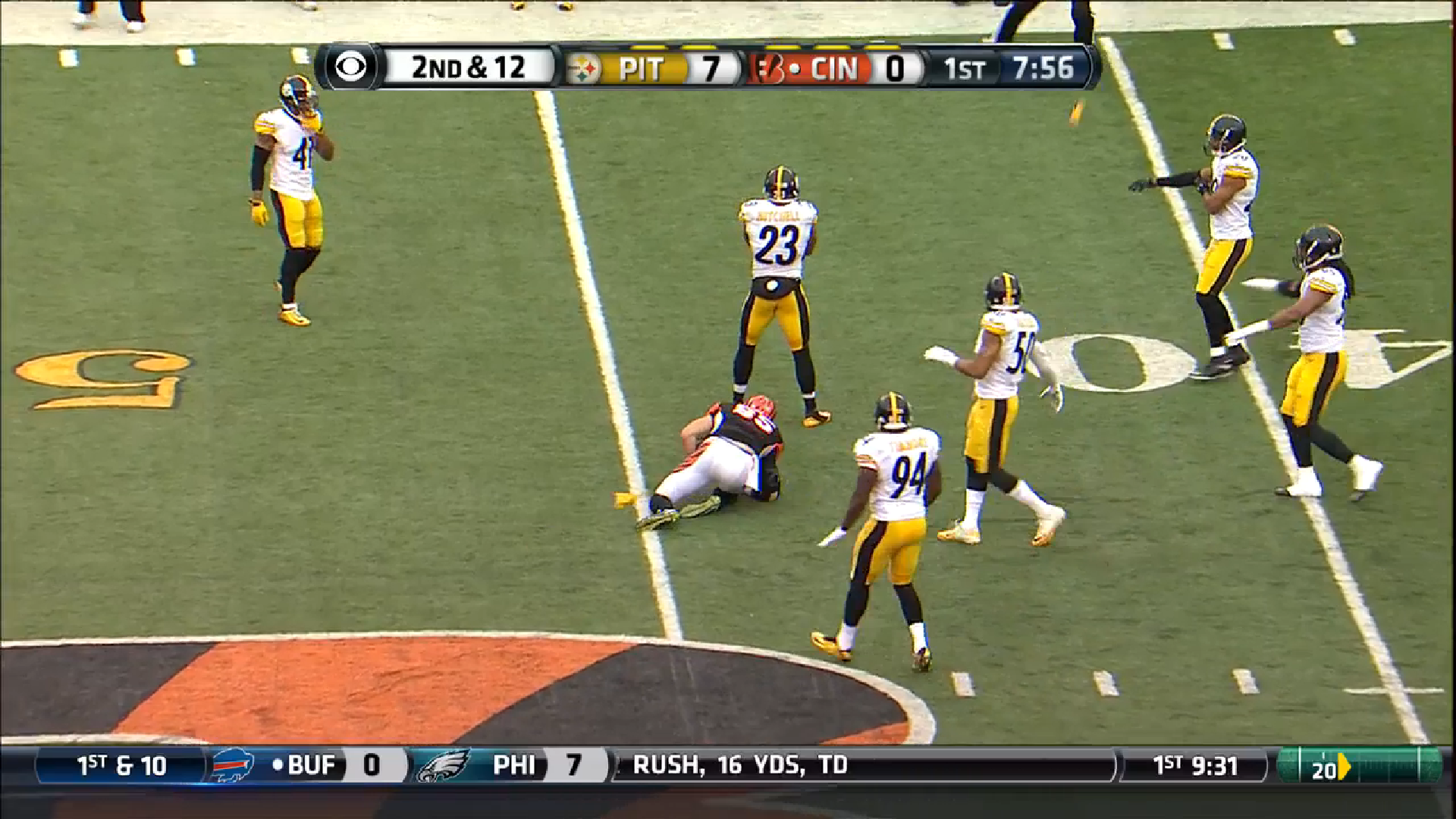 The improvement in play in Mike Mitchell’s game from last season to this has no doubt been a key factor in helping the Pittsburgh Steelers defense become the bend-but-don’t-break, opportunistic unit that it has shown itself to be for most of the year.

But at the same time, the veteran’s play since the bye week has not quite been up to par, as we have seen the negative plays, particularly missed tackles, begin to rear its head back into the picture, which was on display on Sunday against the Bengals.

His first ‘lowlight’ play of the day came midway through the first quarter when he drew an unnecessary roughness penalty while tagging Tyler Eifert down after a completed pass. Mitchell led with his helmet and hit the tight end in his helmet, which resulted in a concussion. These are often difficult plays to criticize, let alone execute, given the speed and angles involved, but nevertheless, it happened and is part of the tape.

The free safety’s first missed tackle of the game came later on that opening drive in the open field on a screen pass to Eifert, who at that point was still in the game. The tight end got a head of steam and eluded Mitchell out in space, resulting in an extra eight yards after the catch on what was in total a catch and run of 24 that set up first and goal.

He was guilty of another missed tackle on Giovani Bernard in the second quarter on a 14-yard run with a misdirection on the handoff. He did well to find the right hole on the perimeter, but then overran the play just a bit as Bernard slipped by. As the back got caught up in traffic, he was able to come back and make the tackle a few yards further down the field from where he has originally missed.

This was the first of a two-play, 80-yard touchdown drive, the second play of which was a 66-yard touchdown pass on which A.J. Green burned past Antwon Blake up the right sideline. But Mitchell did not help matters by failing to bring down the 6’4” receiver after the catch, falling to the ground as Green lightly jogged the last 15 yards to the end zone.

Later in the game, early in the second half, Mitchell looked to be the deep safety for the right half of the defense in a disguised Cover 2. As William Gay released Green on a nine route to cover the flat, the throw was there to be made for the receiver down the left sideline, but the Bengals’ backup quarterback put too much air under it and a bit too far, allowing Mitchell to get over, but in reality this play had no business not being a catch.

Mitchell has no doubt deserved all of the positive words surrounding the improvement in his performance this season, but it would simply not be accurate to avoid talking about when he is not playing well, and that was the case in a good part of the Steelers’ last game.