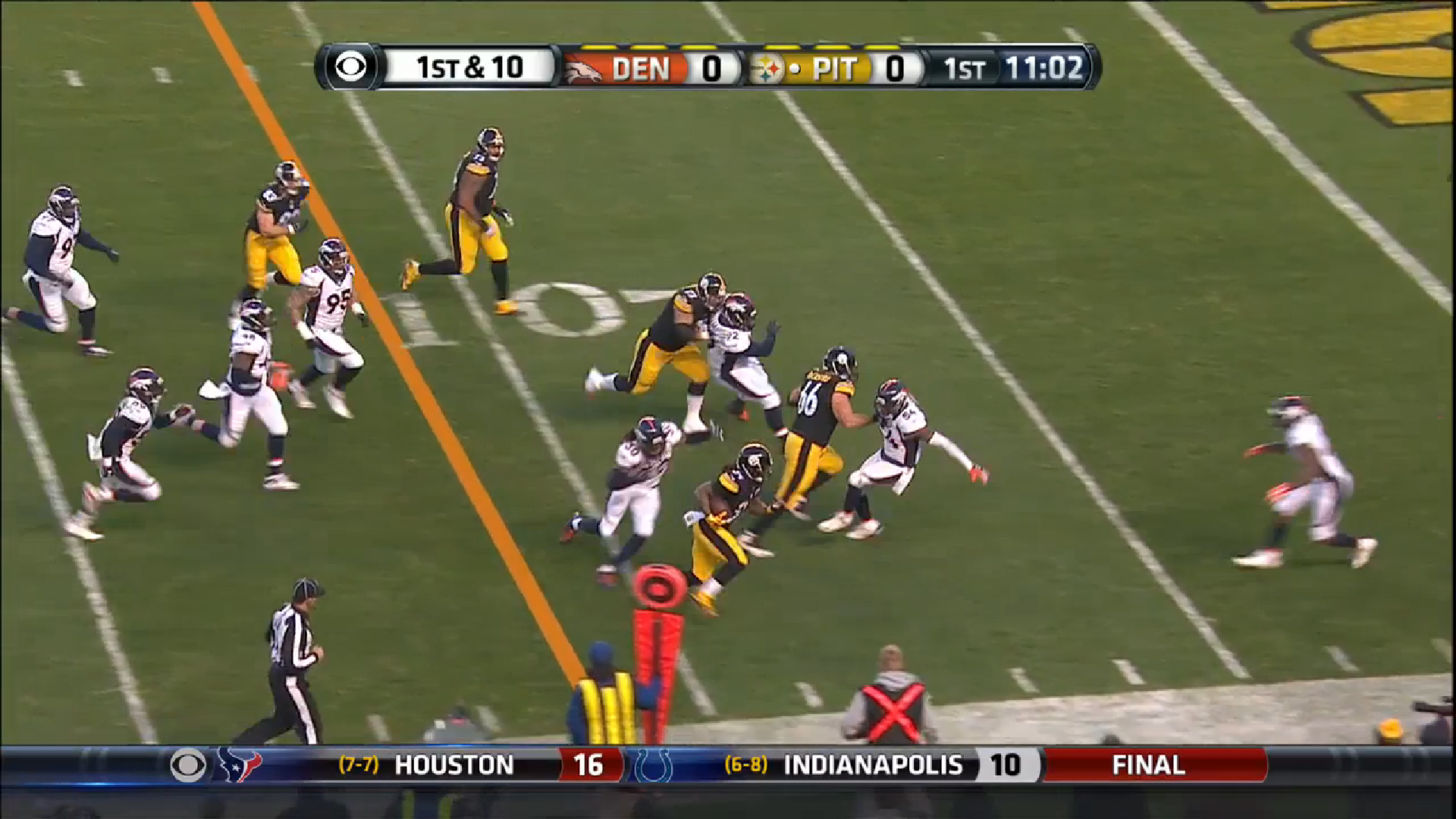 Earlier this week, Pittsburgh Steelers guard David DeCastro became the first offensive lineman not named Maurkice Pouncey to be named to the Pro Bowl since Alan Faneca. If there has been one thing that has separated his play this year from earlier in his career that served as the tipping point, it was his consistency.

He had another fine game on Sunday against a tough Broncos interior defense, helping the offense top 30 point yet again for a sixth consecutive time, even if he occasionally had his hands full with left defensive end Derek Wolfe. The end was able to crash the throwing lane on second down and time his jump to bat the ball down at the line on the second play of the game.

Still, a few plays later, DeCastro did a very sound job sustaining his block in pass protecting against the nose tackle, Sylvester Williams, squaring his base and forcing the big man to settle for trying to bat the ball down as Wolfe had done before, but this time the throw was made, albeit for just a short gain.

On the first play of the next drive, following a fumble recovery deep in Steelers territory, DeCatro got out on the move blocking in front of DeAngelo Williams for a screen pass that picked up 19 yards down to the two-yard line. The guard buried linebacker Brandon Marshall deep down the field to help Williams get as far as he did.

Though the Steelers had significant trouble moving the ball on the ground—the longest run of the day for Williams was just five yards—the culprit was not simply wholesale poor blocking up front. Rather, just a thing or two consistently going awry is what kept the running game from producing. DeCastro personally had a fair game in this department.

On one three-yard run in the second quarter, for example, he did an outstanding job of executing a reach block to get on the nose tackle Williams’ inside shoulder to start the play. Had it not been for the defense breaking down the blocking scheme to DeCastro’s left, his block should have provided the right-side seal to produce a solid running lane.

Really, there were any number of examples demonstrating the fourth-year guard’s fine work in pass protection, on which he was especially adept late in the second quarter and in the fourth quarter. On a 17-yard pickup in the fourth, this time he absorbed Wolfe’s rush and, with the help of a chip from Williams, knocked the rusher out of the throwing lane.

The former first-round draft pick had been on the verge of a Pro Bowl season for the past two years, and finally cracked through this year by improving his game on a down-to-down basis. It helps that he has a signature, defining characteristics as a pulling guard, even if that didn’t show up on tape against the best defense in the league.