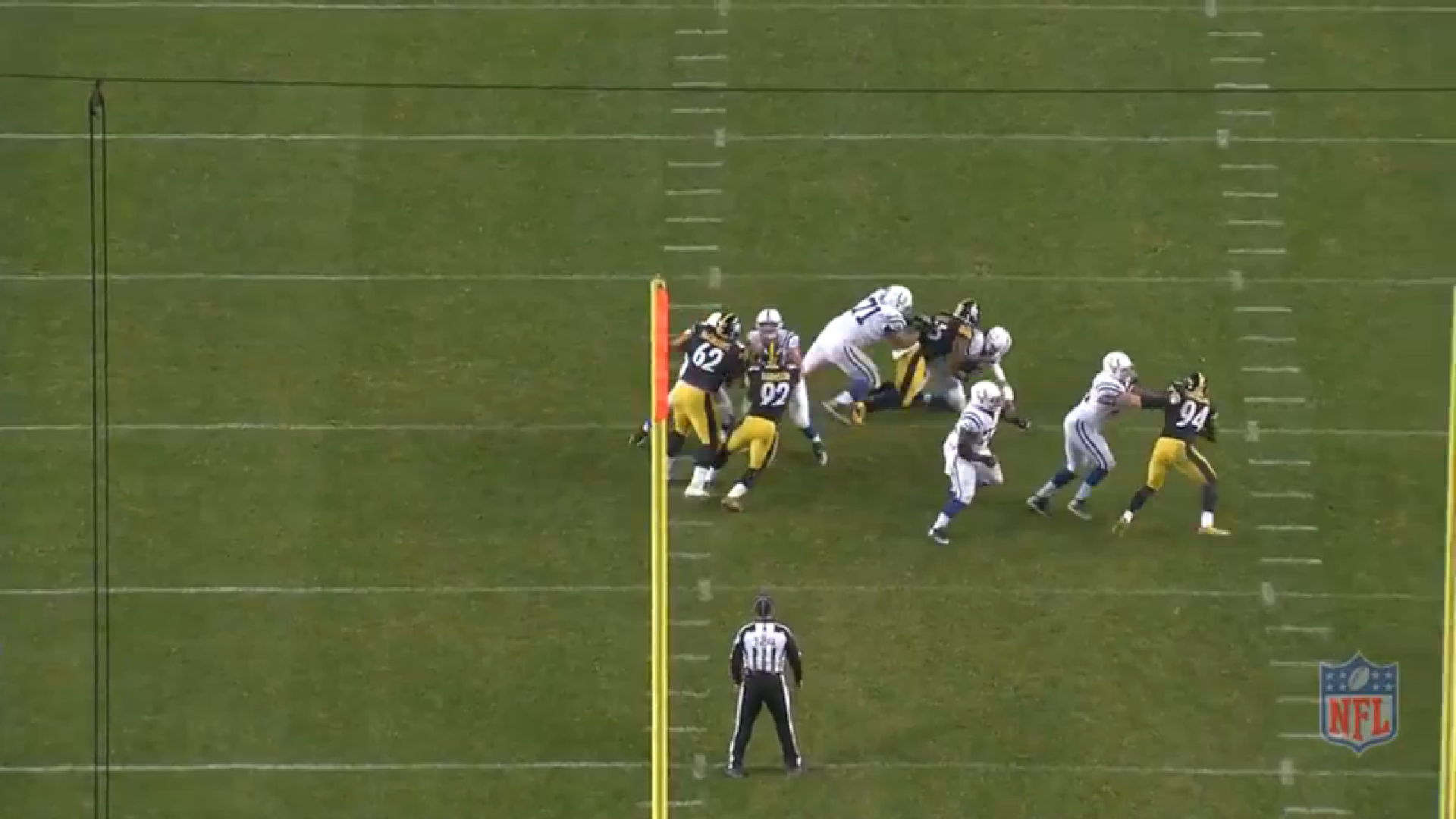 It has been two weeks now since his ‘demotion’ from the starting lineup, but since then, Arthur Moats has only seen his snap count increase, as he logged 64 percent of the team’s defensive snaps against the Colts, with the second platoon getting a heavier workload than the starters at outside linebacker for the Pittsburgh Steelers.

And Moats has continued to be a steady presence for the defense, even if it hasn’t always been routinely noticeable, but he did add to his sack count this year after notching his third at the end of a blowout game against the Colts.

Most of his play came in the second half, and there was a Colts drive early in the half which he essentially dominated, making the tackle on three straight plays after a 19-yard gain to force a punt. On first down, he had short coverage on tight end Dwayne Allen, on which he was in good position to make the tackle after a six-yard gain, though the throw was well-placed to defend a breakup attempt.

On second and four, Moats was able to control Allen’s block, and as Frank Gore hit the pile of bodies at the line of scrimmage, scraped around the edge to join Ryan Shazier in stopping the veteran back for no gain.

Finally, on third and four, after releasing the tight end upfield, Moats came in against the pass, getting into the throwing lane and going up in the air to bat down the pass, which was actually only the second pass defensed of his career, and the first since his rookie season with the Bills back in 2010.

Later in the third quarter, during a three-play sequence, Moats pressured Matt Hasselbeck twice into throwing an incompletion. On the first instance, on second and three, he put the 40-year old quarterback on the ground.

Then on fourth and one, his ability to beat the right tackle with a power move inside flushed Hasselbeck out to his right, where Stephon Tuitt picked him up and chased him out to the sideline, where he had no choice but to put up a desperation pass that was nearly picked off in the end zone.

Late in the fourth quarter, Moats helped force the Colts to punt this time after a third and one stop, though he didn’t make the tackle himself. On this play, he simply did an excellent job of controlling the line of scrimmage, working the tight end trying to block him while pinching the run inside and clogging the running lanes.

Of course, very late in the game, the veteran capped off his night in a fitting way by recording his third sack of the season—technically fourth, with two half-sacks—running the right tackle out wide and then beating him inside.

It seemed an appropriate conclusion on a night in which he was able to more or less have his way over on the right side, even if his statistics don’t necessarily bear that out. The Steelers may not have any all-star pass rushers, but they do have four that are all deserving of playing time, and the platooning has kept them fresh and effective for the most part.