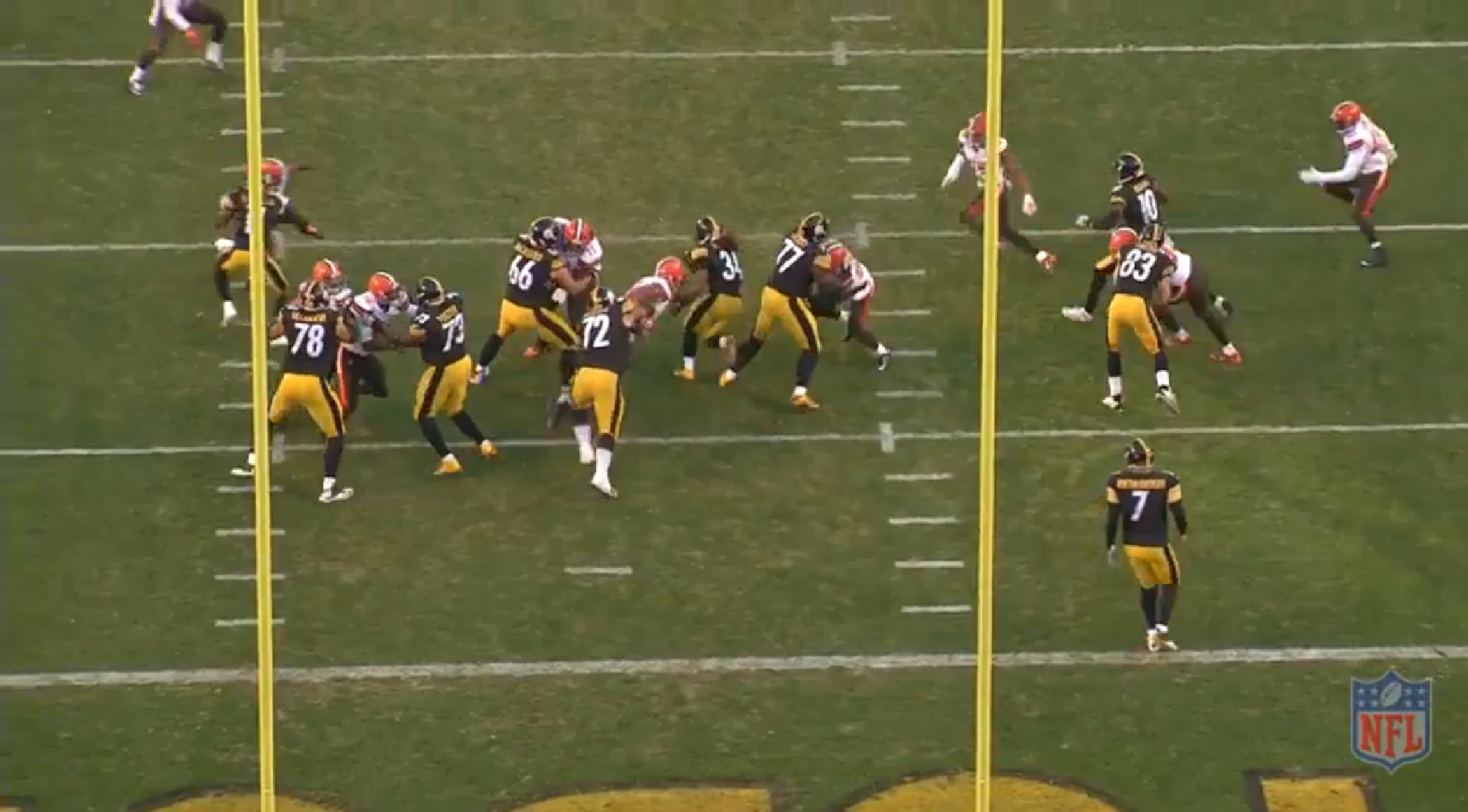 I don’t know that there has been any veteran player on the Pittsburgh Steelers that has made greater strides over the course of the past two seasons than starting right tackle Marcus Gilbert. The fifth-year veteran has taken his game to yet another level in 2015 by slimming down, and his put forth another fine game against the Browns, in spite of what looked like some negative plays that are not as bad as they might seem.

The first play that stood out to me was the third-and-13 play that ended the Steelers’ first drive. It called for a screen pass to Antonio Brown, with Gilbert as the lone blocker in front. Set right between the hash marks at the snap, he really got out to the edge in a hurry, trying to push one defender away while settling down on a second player, but there was only so much he could do on his own.

The team’s second drive was not the best look for the fifth-year tackle, however. On the first play of the drive, he was beaten around the edge by Barkevious Mingo, swimming over the top. Gilbert argued that the rusher gave him a forearm to the helmet, and if you watch the play below, it’s there, but he was still beaten on the play.

The drive ended just two plays later on an incomplete pass, but it also knocked Landry Jones out of the game. a late bull rush by the defender caught Gilbert, walking him back a bit. As Jones stepped up in the pocket, Gilbert’s left foot stepped on his ankle.

Later, midway through the first quarter, the veteran got another chance to show off his slimmed down physique, asked to get out on the move to block down on the safety down the field on a running play. But the run never got past the back side defender.

Two plays later, Gilbert allowed his second tipped pass in three weeks, but this one didn’t seem to be his fault, as, from the looks of it, it was one of those quarterback-wide receiver reads, where only Ben Roethlisberger and Brown were aware of the play call, a short screen to the right.

Later in the game, on the Steelers’ first play of the fourth quarter, the right tackle did a nice job of looking for work on a four-yard run. After making sure that the tight end had secured the edge rusher, he moved to the second level, harassing the inside linebacker out of the play.

Still later, as the running game began to pick up in the fourth quarter, Gilbert threw a key block up the middle to seal the inside linebacker out of the A gap, allowing the back to find space through the crease for a nine-yard gain.

It started a chain reaction, as the next play was an 11-yard carry off his back side as well. The Steelers were able to run out the clock in large part thanks to the run-blocking on the final drive. Gilbert has really been playing well, and he had another quality game against the Browns, with some of his ‘down’ moments, as explained above, looking worse for him than they actually were.