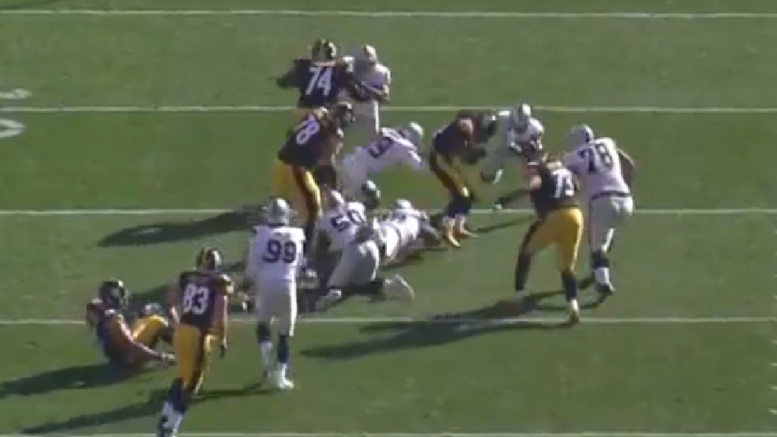 When it came time for the Pittsburgh Steelers to make their 53-man roster this year, it had seemed that injuries has conspired to begrudgingly force the team to carry second-year former undrafted free agent guard Chris Hubbard as one of eight offensive linemen.

The fact that he has been regarded as one of the top eight linemen, not even a full line, should have been a testament to just how thin their depth had become. The Steelers remain with two of their top seven linemen on inactive lists from the start of the season, and have since added a third.

By now, Hubbard finds himself within the top seven, routinely getting  helmet on game days, and has in effect taken over the role as the backup swing tackle, after Alejandro Villanueva was forced to step into the starting lineup following the season-ending ACL injury suffered by Kelvin Beachum.

According to Pittsburgh Tribune-Review writer Chris Adamski, there is another place that he has consistently found himself this season: the tight end meeting rooms.

The offensive lineman told Adamski yesterday that he has been attending meetings with the tight end group in addition to the offensive line group all season, irrespective of the health of Matt Spaeth, the team’s second tight end, who missed his second game of the year on Sunday.

Hubbard has seen 19 snaps this season, with the majority of them coming in the two games that Spaeth has been out. He saw seven snaps on Sunday as a tackle-eligible tight end, and has been called into action as an extra blocker sporadically while he has been active.

As we have seen over the past couple of years, offensive coordinator Todd Haley has been a big fan of using an extra offensive lineman as a tackle-eligible to serve as an additional blocker. For the majority of the past two seasons, that role had gone to Mike Adams, but he remains on the Physically Unable to Perform list. Prior to Adams losing his starting job, Beachum served in that role.

Briefly, it was Villanueva to start the season, who had to be active as the game day swing tackle. Doug Legursky has been serving as the interior reserve lineman. But with Villanueva now in the starting ineup and Hubbard consistently getting a helmet, that role, sparse as it is, has gone to him.

And as he told Adamsky, it has not been a spur of the moment whim, but rather a well-executed plan, learning the position by attending meetings with the tight ends. A game day inactive reserve would tend to have that luxury.

Of course, part of the impetus for his usage was the fact that rookie tight end Jesse James was not regarded as ready, but he played rather well on Sunday in his first action as Spaeth sat out. It was Hubbard who came into the game before James, but the tight end played more as the game wore on. When Spaeth returns, neither figure to see much time.