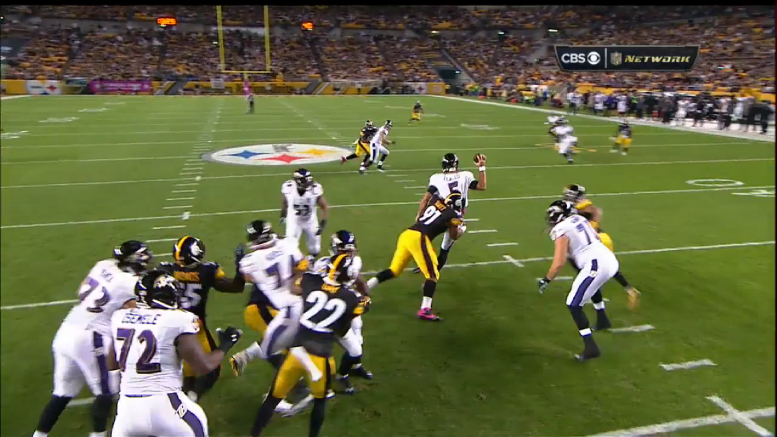 It’s not often that a young player becomes a regular, routine starter for the Pittsburgh Steelers on defense, but that is what we have found with 2014 second-round draft pick Stephon Tuitt, who has been the team’s starting left defensive end for the past eight regular season games, including the first four games of this season.

Not only does he start, he logs a high volume of snaps, logging about 90 percent of the Steelers’ defensive snaps to date, which is certainly a heavy workload. And he makes an impact, totaling 3.5 sacks on the season and 22 tackles, credited with 10 in the last game.

While the total may be a bit generous, and the youngster was certainly not flawless in his performance—I may circle back with a second article later in the week highlighting areas of improvement—Tuitt’s impact on the Ravens game was obvious.

The second-year end got his weekly sack out of the way early, ending Baltimore’s first drive with a takedown of Joe Flacco to force the Ravens to go three and out. The pressure came on a delayed rush, as he stood up and sat back until center Jeremy Zuttah turned his back on him, then showing impressive pursuit and closing speed to drop the quarterback for a five-yard loss.

Tuitt had a handful of additional pressures throughout the game, but as noted by his tackle total, much of his work came against the run. On the first play of the Ravens’ second drive, he managed to trip up Justin Forsett for no gain after being cut by the right tackle on the move. The contact itself is difficult to see, but Tuitt’s first move to beat the tackle is not, and Forsett ultimately tripped over his lineman.

Early in the second quarter, the young end shed Marshal Yanda’s block on a stretch run to his side, holding the point until Forsett committed to a hole, only to peel off and wrap the back up after a five-yard gain on second and 11. He had a similar play later in the same drive, only he shed the tackle inside the tackle box to make the tackle.

In the third quarter, after both teams traded touchdowns, the Steelers offense went three and out, and the defense reciprocated on a series that started with Tuitt adeptly navigating around a cut block to tackle Forsett at the line of scrimmage for no gain.

The Ravens began to drive early in the fourth quarter, but as they breathed down the neck of the red zone, the defense stood up, led by Tuitt making the tackle on Forsett for a loss of one on first and 10. The tackle had inside leverage, but as Tuitt saw the cutback attempt, he freed his play side arm to bear hug the back for the tackle.

As alluded to earlier, the 22-year-old lineman still makes youthful mistakes from time to time, particularly in the running game, but that simply means that he is still growing. The positives in his contributions, as highlighted above, unquestionably outweigh the negatives that will be worked on through experience.