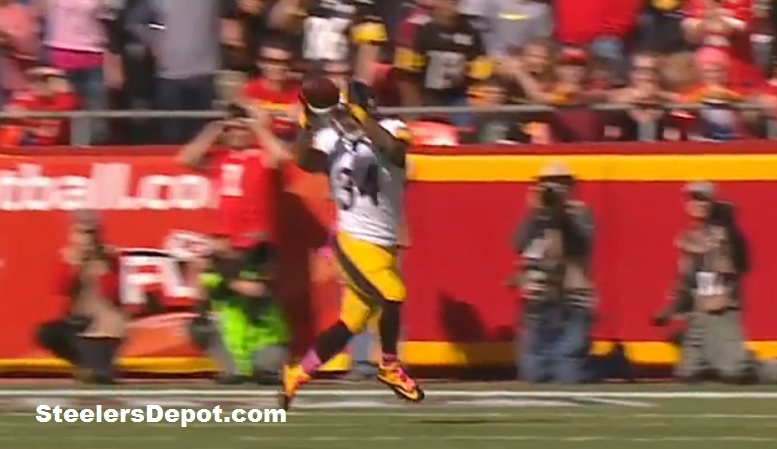 The Pittsburgh Steelers dropped to 4-3 on Sunday with their 23-13 loss to the Kansas City Chiefs and while there were several plays that played key factors in the loss, below are six of them that really had significant impacts, in my opinion.

A lot of you probably forgot all about this first play being as it happened early on the game.

With the Chiefs ahead 3-0 in the first quarter, the Steelers offense managed to answer with a long drive that started at their own 33-yard-line. That drive, however, culminated with a field goal after running back DeAngelo Williams dropped an easy 3rd and 2 pass that would’ve given the Steelers offense a first down inside the Chiefs 5-yard-line. Jones delivered the ball right on the money, but Williams took his eyes off of the ball prior to making sure he caught it.

The second big play came on a 4th down and 1 from the Chiefs 32-yard-line with 4:50 remaining in the first half. The Steelers offense decided to go for it and Williams was stuffed for no gain against a stacked Chiefs front. Williams, as you can see, runs right into a brick wall. Not only did the drive stall, the Chiefs marched down the field and kicked their third field goal in as many offensive possessions.

The next play I chose, which took place with 11:46 left in the third quarter, included a bad throw by Jones on 3rd down 3 from the Chiefs 46-yard-line. Jones threw too high to wide receiver Markus Wheaton and thus the drive stalled with the Steelers only down 6 points at the time.

On the Steelers next offensive possession, Jones threw his second interception of the game just after the offense moved into Chiefs territory. While the slant pass from Jones to wide receiver Antonio Brown was tipped by linebacker Derrick Johnson, the ball still had a good chance of being caught. As luck would have it, the ball careened forward several yards out of Brown’s hands and Chiefs safety Eric Berry intercepted it. The Chiefs took advantage of the turnover as their subsequent drive culminated with the game’s first touchdown.

The last two big plays on Sunday were just that and they happened back-to-back midway through the fourth quarter with the Steelers down by 3 points.

On 3rd and 4 from the Chiefs 22-yard-line, quarterback Alex Smith hit tight end Travis Kelce for 26 yards down the middle of the field. On that play, the Steelers gave Smith a cover-1 look prior to the snap. At the snap of the football, safety Mike Mitchell rotated back to the deep left while fellow safety Robert Golden shifted to his right. This put the Steelers in cover-2 and their width and depth left linebacker Lawrence Timmons singled-up on Kelce down the middle of the field. It was a great read and throw by Smith and the first of two backbreakers for the Steelers.

On the very next play, the Chiefs ran the outside zone to their right against the Steelers backup linemen and running back Charcandrick West galloped 36 yards to the Steelers 16-yard-line. During the big run, Steelers defensive linemen L.T. Walton, Daniel McCullers and Cam Thomas all ended up on the ground. Additionally, linebackers Timmons and Sean Spence both missed tackles. Four plays later the Chiefs scored their second and final touchdown of the game to put them ahead by 10 points.