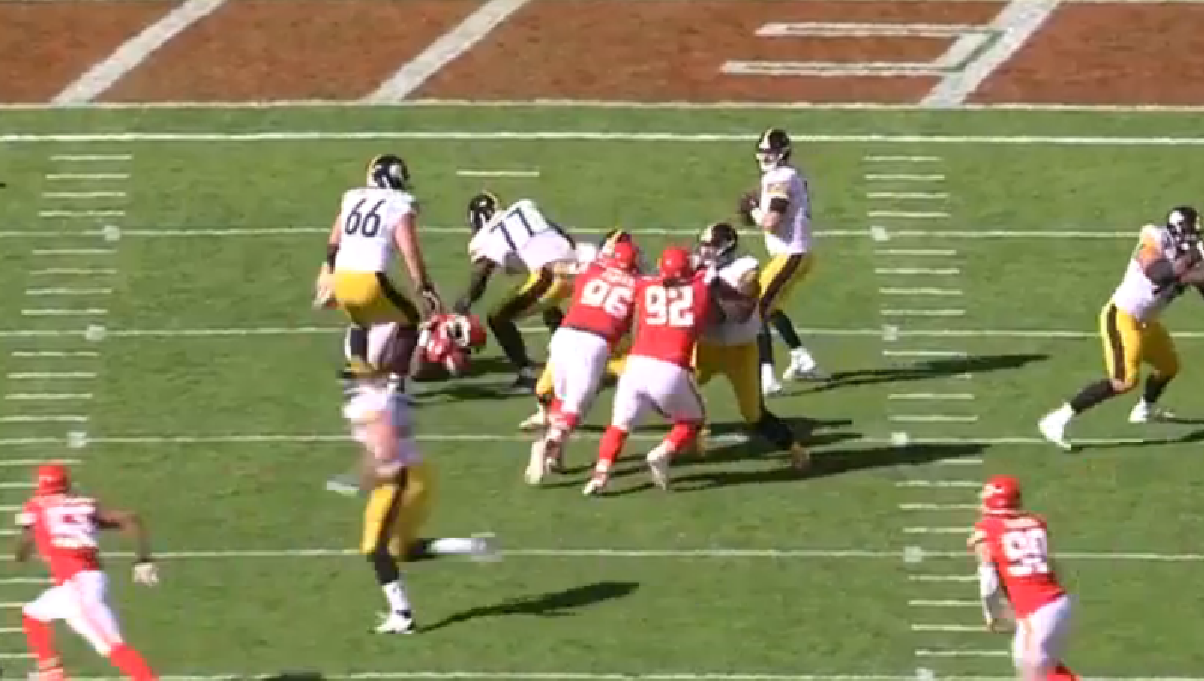 For one reason or another, not a lot of attention has been paid to Pittsburgh Steelers right tackle Marcus Gilbert this season. Ordinarily, it’s a good sign for an offensive lineman when he goes unnoticed, but we are not the sort to overlook quality offensive line play.

And that is what Gilbert has been providing for the Steelers on the right side of the line this season, his fifth, and so far, his healthiest. No doubt that has played a role in it also being his best, as he continues to be the most improved pupil of Mike Munchak’s.

Last year, the primary technical attribute that Munchak instilled in Gilbert was to play with a wider base that allowed him to anchor better. This year, he has gotten Gilbert to play with his arms rested at a higher level, quickening his punch and improving his reaction time and his ability to recover.

This past Sunday, the right tackle was faced with arguably his biggest challenge of the season, facing Chiefs outside linebacker, and reigning sack champion, Justin Houston. After earlier largely silencing a former nemesis, Elvis Dumervil of the Ravens, Gilbert again held a premiere pass rusher in check.

There were occasions in which Houston was able to get a bit of push, perhaps registering a pressure on the quarterback, but none that, in my observation, meaningfully influenced Landry Jones’s throw or decision-making.

On the first play of the game, for example, Houston used his long arms to create distance from the right tackle, but Gilbert countered well, and Houston’s attempt to leap to disrupt the trajectory of the throw was futile.

Later on the opening drive, facing a third and 13, however, the edge rusher was able to bat down a screen pass on a play on which Gilbert was perhaps a bit too passive, knowing that there was a screen set to come to his side. Later in the fourth quarter, he used a cut block in this situation.

Midway through a drive later in the first quarter, Houston had perhaps his most obvious success against Gilbert using his bull rush, able to walk the right tackle backward as he caught Gilbert not yet set in his footwork. Still, he never allowed Houston to release and pressure Jones, who completed the pass in spite of pressure from the opposite direction.

Later in the drive, Houston had him skipping back a few steps, but this time Gilbert was able to anchor as Jones set and threw out of an effectively clean pocket in spite of Houston’s presence, since he was by that point under control.

Late in the half, Gilbert did well in denying Houston the corner, keeping his body in front of the pass rusher as he sprinted up the arc. The two were behind him by the time Jones pulled the ball down and scrambled to his right to, perhaps unnecessarily, throw the ball away.

Gilbert completely shut Houston down on the next rep, which proved to be an unfortunate interception, anticipating an inside squeeze, yet maintaining resistance against a counter move. On the first play of the third quarter, Houston ended up on the ground thanks to an assist from David DeCastro.

A similar instance as the previously described throwaway occurred just two plays later in the third quarter, only this time, Jones felt comfortable enough to check the ball down for an eight-yard gain.

Into the fourth quarter, Gilbert did an excellent job of locking up Houston and providing Jones the room to step into a vertical throw down the field. Because of the fact that it was a slow-developing throw, about five seconds after the snap, it is understandable that he began to give ground late.

Three plays later, Gilbert displayed those raised arms, able to get a punch on Houston to keep him at an initial distance, then resetting against a bull rush to allow Jones a shot into the end zone, to no avail. He was sacked a play later, though as can be seen, Houston had no impact on the play, as he vacated to the middle of the field after losing the initial rush, and realizing that the rush from the opposite side would get home.

On the Steelers’ last drive, the Chiefs primarily used Houston off the right side, often flipping him back and forth, perhaps thinking he might have more success against a novice left tackle in his first start. He certainly was getting little done against Gilbert on that afternoon.