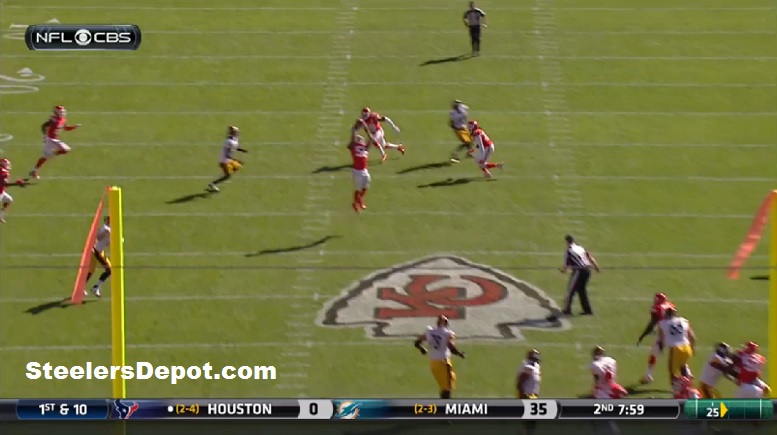 Pittsburgh Steelers quarterback Landry Jones made his first career starts Sunday against the Kansas City Chiefs and it will be a game that he certainly remembers when it comes to him needing to make a few more throws.

Jones was picked off twice in the game and his first one happened on a play that he had success with last week in the win over the Arizona Cardinals.

In case you forgot, here is one of the five great throws that Jones made last week. Against zone coverage, Jones hit wide receiver Martavis Bryant over the middle for 20-plus yards. His throw on that big play needed to be high enough so that the dropping linebacker couldn’t make a play on the football. That play also included Bryant and fellow wide receiver Darrius Heyward-Bey both running post routes with the former initially stemming his route to the outside

Sunday against the Chiefs, the Steelers ran the same exact play on 3rd and 10 with 36 seconds left in the first half. This time, however, Jones failed to get enough height on his throw and Chiefs linebacker Derrick Johnson jumped and plucked the football out of the air for the interception.

While I’ve yet to time both plays, it appears as though Jones held on to the football roughly a half second longer on the play that resulted in an interception.