Last week against the Ravens, Pittsburgh Steelers outside linebacker James Harrison logged not only his highest proportion of snaps on the season, he also put forth perhaps his best game so far, an evaluation that goes beyond the fact that he managed to record his first sack of the year.

While far from flawless by any means, it is telling that the 37-year-old logged the most snaps at his position group, including nearly all snaps from midway through the fourth quarter through overtime. His work against the run, of course had much to do with that, an area that has been a strength throughout his career.

Harrison is rarely faced with a matchup in which he is not the stronger of the two players, given his relentless workout regimen, and it shows up when he sets the edge. Nearly any ordinary play can serve as an example, such as a one-yard carry by Justin Forsett in which he pushed back James Hurst to completely seal off any possibility of the zone runner popping out in his direction.

Of course, everybody is prone to a mistake or two from time to time, and it seems that he was caught cheating on one running play that resulted in a 33-yard gain from Forsett early in the second half. The Ravens set the tight end to his side against a nickel look, and Harrison hoped to cheat behind the left tackle rather than flowing over into the gap. The result was a wide open hole for a big gain.

Still, outside of a mistake or two as above, Harrison remains perhaps among the best at his position in playing the run. He not only sets the edge, he has the ability to shed and make the tackle, as he did against Hurst to get Forsett for no gain later on that same drive.

He is relentless on the back side pursuit, even if it means hurdling a cut block from the back side tight end, as he did late in the third quarter before racing across the field to bring Forsett down from behind for a run of no gain. 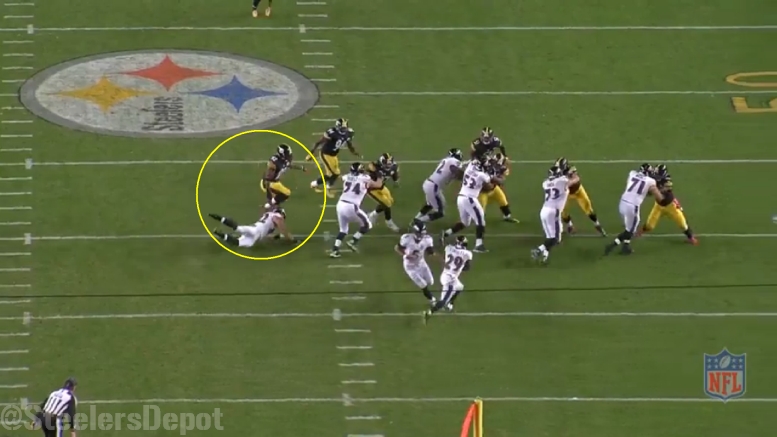 As the game wound down, it seemed, so did the Ravens’ pass protection, as that is when the 37-year-old had his most success rushing the passer. Perhaps it’s worth noting that the snap count had been more evenly distributed in the pass rusher rotation up to that point in the game.

That meant Harrison was well-rested at the end of the game, going up against a weary backup left tackle, which translated into pressure, as on the third play of the fourth quarter in which he locked Hurst’s hands inside his frame at the top of the arc to get by and pressure the quarterback.

Late in the fourth quarter, with the offense nursing a three-point lead, the defense stepped up to force a four-and-out, with Harrison playing a major role on the series. On second and 10, he looped inside around the A gap, with the left guard unprepared, pursuing through the running back to get a hit on the quarterback and help force an incompletion.

Two plays later, on fourth and 10, the secondary held up well to prevent the Ravens’ targets from getting open, which bought Harrison and the pass rush enough time to break through and register a sack and a turnover on downs.

In spite of the fact that that gave the offense the ball at the Ravens’ 29-yard line, the Steelers failed to capitalize on that opportunity, ultimately missing on a 41-yard field goal. The Ravens kicked a game-tying field goal to end regulation, and ultimately won in overtime, spoiling a fantastic defensive stand.