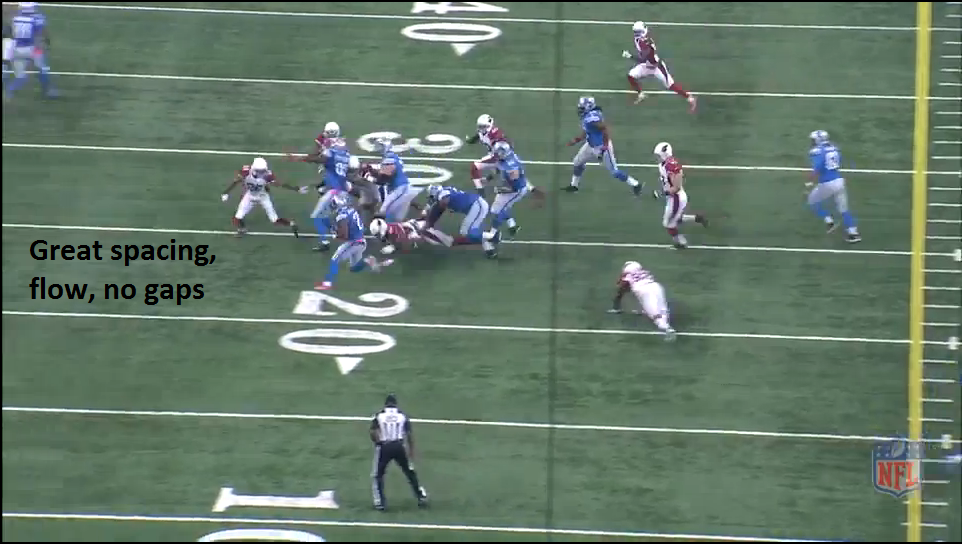 This year, Jon Ledyard and I will be collaborating our scouting reports. We’ll play to our strengths – he’ll be focusing on the individuals while I’ll be looking at overall scheme. These reports will be broken down into two articles, one for offense and one for defense.

Our reports for the Arizona Cardinals’ defense.

The Cardinals are a tough defense to figure out. They are certainly an opportunistic defense, leading the league with 11 interceptions. The next closest team has eight. Seven different Cardinals have at least one pick.

They are struggling to generate sacks. With Alex Okafor out, they’ll only have a combined two sacks from their outside linebackers. Okafor had two himself.

Defensively, they march to the beat of their own drum, almost always playing in a nickel defense with five defensive backs. Five are playing over 90% of the snaps with a sixth, Tony Jefferson, around 66%, including 76% last week.

Deone Bucannon is used as a faux-linebacker, almost always playing in the box and paired with inside linebacker Kevin Minter. Think Troy Polamalu in 2013 or even Jaquiski Tartt in Week 2 against the San Francisco 49ers.

Seven of Minter’s 30 tackles have gone for a loss.

Rookie Markus Golden had been playing 34% of the time at ROLB. I know you’re wondering so…LaMarr Woodley is playing 42%. He is still wearing #56.  Calais Campbell, their best defensive lineman, is logging two-thirds of the defensive snaps.

Overall, they do a great job flowing against zone runs. Work down the line, maintain spacing, and can penetrate. If I’m Pittsburgh, I focus on a man and gap running scheme than inside zone. 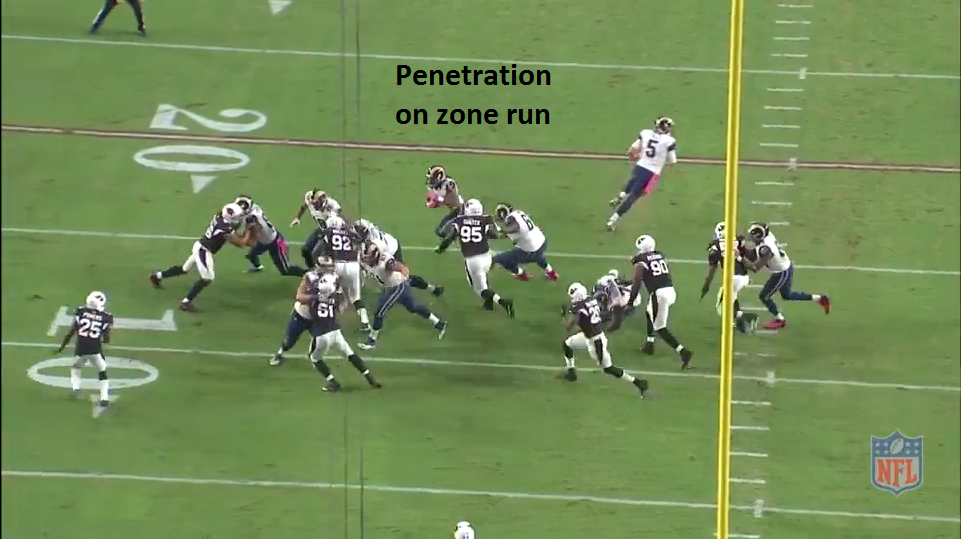 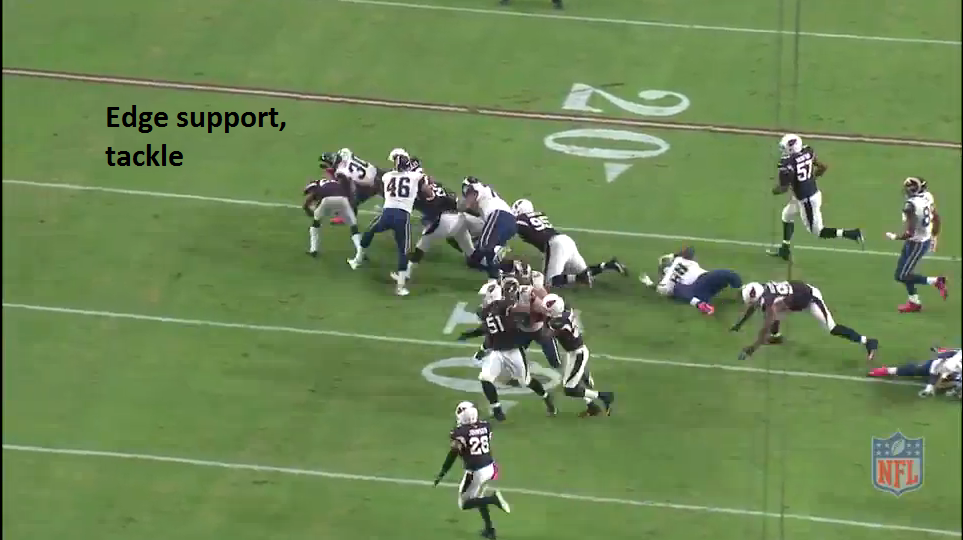 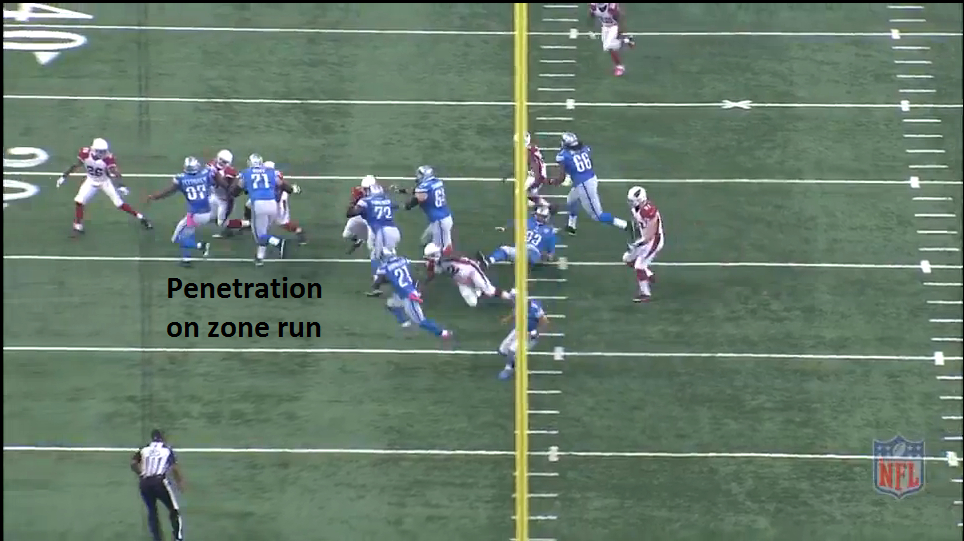 They like to stunt, too. One pretty obvious alert is shown here, with Golden lined up as the three tech and Campbell at end. Campbell crashes inside and Golden contain rushes. 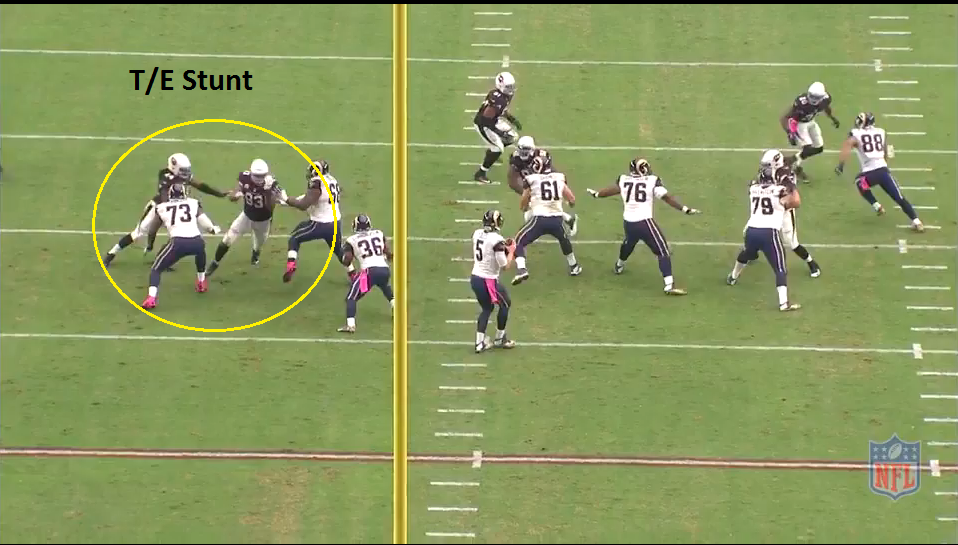 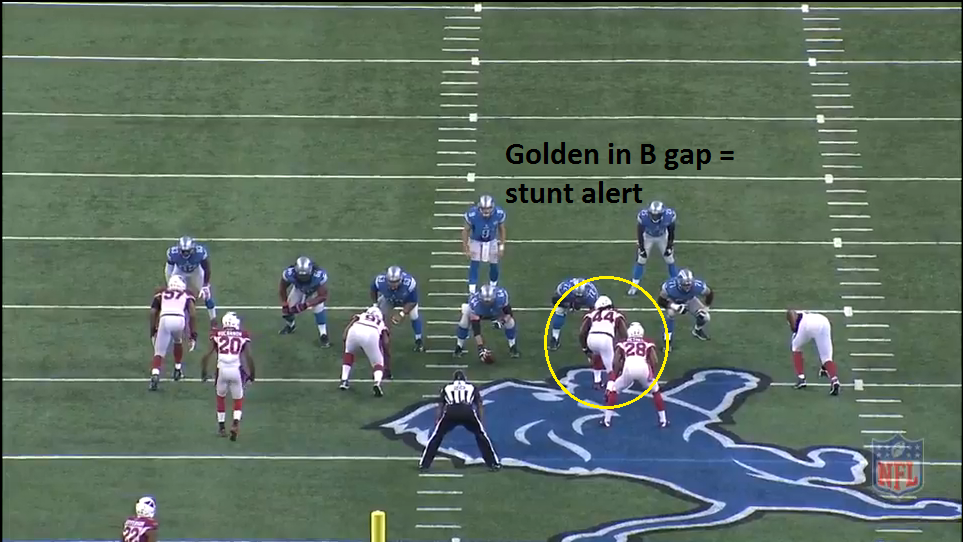 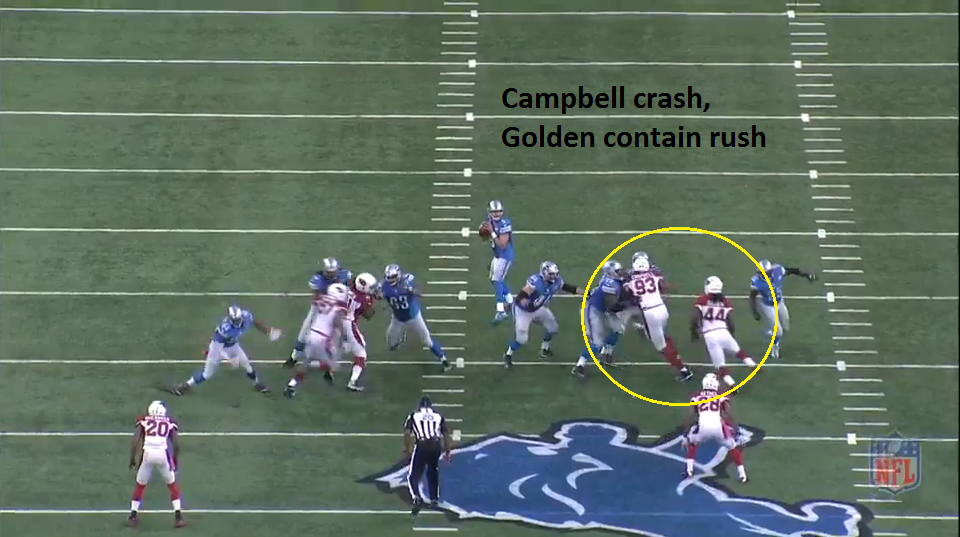 Love to sugar the A gaps with their inside linebackers. Forces you as an offensive line to pinch and slide down. When they drop out, they’re getting a free rusher or favorable matchup on the edge. Here is Okafor coming in free in Week Four against the St. Louis Rams. 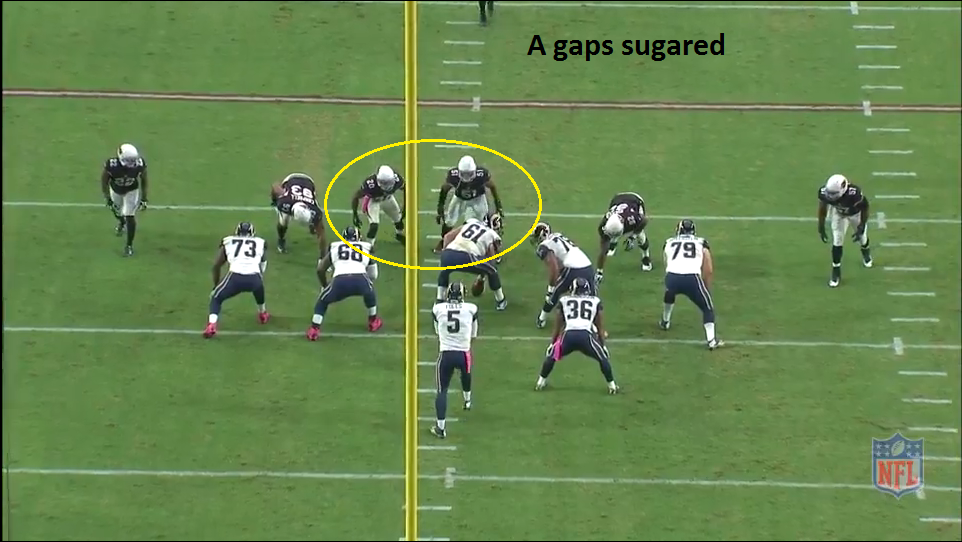 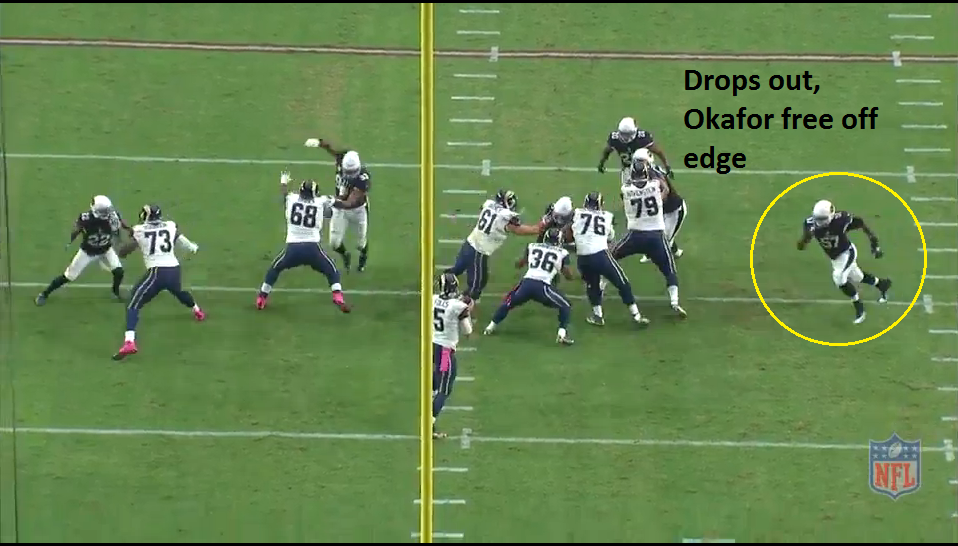 They will employ a Bear front in some short yard situations, covering up both guards and the center. Here they are showing it on second and three and third and one on consecutive plays. 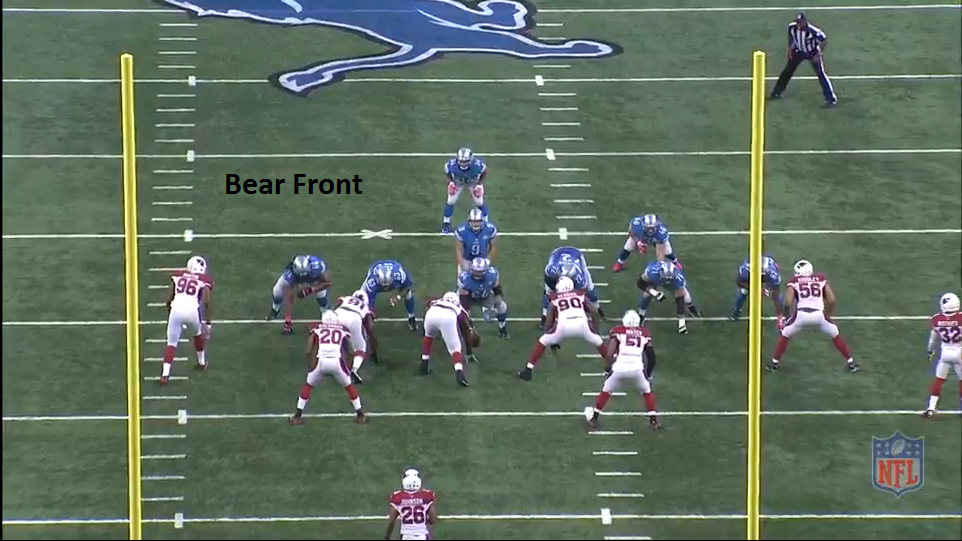 Can get aggressive on defense and send their safeties. Usually it’s Tyrann Mathieu off the edge. Don’t think I’ve seen them run a cat (corner) blitz.

Hard for me to get a read on their coverage. See a mix of man and zone, and probably some pattern matching. Did that a lot under Todd Bowles last year and some remnants still remain.

Wide receiver Brittan Golden and cornerback Justin Bethel are the Cardinals’ gunners. Bethel is one of the league’s best cover guys and has been a fantastic special teamer dating all the way back to his college days at Presbyterian. He’s played 114 snaps on special teams. No one else on their roster has more than 96.

Safety Rashad Johnson serves as the team’s upback and has done so for years. Haven’t run a fake with him since they did it twice in 2012 when they ran two successful ones for gains of 40 and 24 yards. Both came late in the second quarter on their own 25 and 33. Was not able to find any evidence of them running fake punts since then so odds seem low.

Six of Drew Butler’s seven punts the last two weeks have landed near the left corner, on or around the numbers.

You can watch all 32 teams in the NFL, and you’ll likely not find another defense that operates like the Arizona Cardinals unit. Five defensive backs are the only defenders on the team playing 90 percent or more of the defensive snaps, as the rest of the unit seems to be in almost constant rotation. Linebackers Kevin Minter and Alex Okafor are the only other defenders playing over 70 percent of the defensive snaps, but the latter is slated to be out a few weeks with a calf injury.

Nailing down a starting 11 to scout for you is quite difficult, but I’ll start with some general numbers on the Cardinals defense, before moving into the most consistent aspect of their unit: the secondary.

Arizona’s defense will give some ground, surrendering 332 yards per game, but only allows opponents to convert 36 percent of their third downs. They haven’t given up a fourth down conversion in three attempts this season either. The Cardinals will foul quite a bit, tied for fourth in the NFL with 43 penalties, but such is the lot for a team that plays as physical and intense a brand of football as defensive coordinator James Bettcher’s crew does.

If you want splash defensive plays though, you’ve come to the right place. The Cardinals have churned out 11 interceptions this season, three more than the next closest team, to go along with seven forced fumbles (unusually, they’ve only recovered two). Three of those interceptions have been returned for touchdowns by three different players, representing the dangerous abilities of the Arizona defense when a turnover is generated.

Outside of going into scheme, which is Alex’s arena, what do you say about this secondary? Highly talented, athletic group, that is tough as nails and will play the run like linebackers. That’s one of the biggest reasons why the team is able to employ a 3-3-5 so often, typically utilizing Deone Bucannon as the other inside linebacker next to Minter. Bucannon is an animal in his run-fills, showing excellent read-and-diagnose to lead the team in tackles with 35.

Terrific scrape-and-replace to fill the edge and drop Ameer Abdullah for a one-yard loss. Bucannon plays like a linebacker, but moves like a safety. Sure tackler with terrific instincts in the box.

Minter is his counterpart inside, a smart, physical linebacker who makes up for his lack of elite range with some of the most underrated instincts in the game. Minter isn’t flashy, but he can do a little bit of everything, and he’s a great tackler. No inside linebacker in the NFL has more tackles for loss this year than Minter’s seven.

When it comes to coverage, good luck finding a duo playing better than cornerback Patrick Peterson and slot corner and occasional free safety Tyrann Mathieu. Both have two interceptions apiece, and have broken up a combined nine passes this season. Mathieu is the real deal, one of the most versatile and well-rounded defenders in the game today.

Not many free safeties can play a divide route with this kind of range, but Mathieu has the quickness to sit on the post pattern and bait the quarterback into thinking he’s missed his first read on the nine route. As soon as the ball is released, Mathieu knows he has the quickness to get back over in time to make a play on the vertical route. This ball is terribly overthrown, but Mathieu gets there in a flash anyway.

While Peterson’s skills are well known, I actually think Rashad Johnson is the unsung hero of this bunch. Excellent ball skills and athleticism to go with his top-notch instincts in coverage. No slouch as a tackler either.

While the Cardinals are extremely solid on the back end, they’ve managed only eight sacks this season in five games, and Okafor has two of those. That isn’t to say they don’t have any ability up front, but they rely on blitzes and a variety of pressure packages to get home on the quarterback.

Not only is this an extremely well-run stunt that gives Markus Golden an open path to the quarterback, but check out Calais Campbell as the three technique. Great hand usage at the point of attack to knock the guard off his base, then a brilliant spin move to counter back inside.

The Cardinals defensive weakness is that they don’t have any great individual pass rushers, especially with Okafor out, but these two are the most formidable. Golden isn’t a great athlete, but he’s got an active upper half, ideal physicality, and an incredible motor in pursuit of the ball. Energizer bunny guy who will start in Okafor’s place.

Campbell is the one defensive lineman who plays over 60% of the defense’s snaps, and with good reason, he’s one of the top 3-4 defensive ends in the NFL. Top-notch technically at the point of attack, absolute beast with his hands and arm extension, and obviously gives the unit some juice as a pass rusher.

The rest of the crew up front are far from slouches, with rookie Rodney Gunter flashing the most. I’ll be honest, even with the extensive draft work I do, I had never heard of the Delaware State product when the Cardinals selected him in the fourth round this year. Neither had many of my colleagues, leading to Gunter being called a reach by many. He hasn’t been perfect, and he’s played less than 50 percent of the team’s defensive snaps, but Gunter has flashed a nice first step and better technique than his collegiate rawness suggested.

He and Frostee Rucker allow the team to cycle options all along the defensive line, including the nose tackle position. Neither are true nose tackles, but Arizona will utilize all hands on deck at seemingly all spots along their front. Even ex-Steeler Josh Mauro has found his way onto the field for 94 defensive snaps. LaMarr Woodley? He’s got 144 snaps, most of them off the edge, although I see nothing special from him on tape.

Maybe my favorite Cardinals stat (I’ve said that a couple times, huh?)? They have 30 tackles for loss this season, seven more than the next closest team. That’s an average of six tackles for loss per game, an extraordinary number. An incredible 12 defenders have gotten in on the act too. With a team that plays this often behind the line of scrimmage, the Steelers offensive line can’t afford to be anything less than on point when getting off the line of scrimmage.

On special teams, punter Drew Butler is in his second year with the team, the same Drew Butler that spent the 2012 season with the Steelers. He’s not much better than he was then, averaging just 38.6 yards per punt, dead last in the league. Had six punts against Detroit, four were shorter than 36 yards. One went for 48, but took about a 15-yard roll, not even able to be fair caught because it was so short. Simply put, he’s a weakness, no way around it.

The gunners are wide receiver Brittan Golden and cornerback Justin Bethel. Golden actually looked pretty impressive on tape, taking good angles and working hard to get to the ball carrier. Bethel might be the best gunner in all of football, as evidenced by his 2013 and 2014 Pro Bowl nods, and PFF’s annual ratings which mark him as the best special teamer in the NFL.