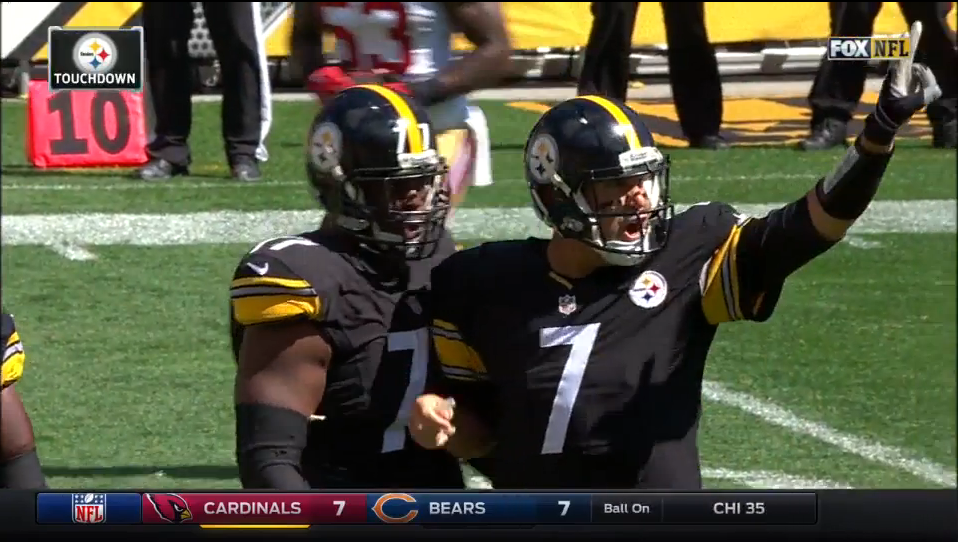 Though there had been talk for years of the Pittsburgh Steelers’ offense and its high potential to be not only prolific, but proficient at scoring. Quarterback Ben Roethlisberger had driven a yards-gaining offense for some time now, but it seems only last year that they have begun to stake a claim upon their full potential.

During the offseason, in the beginning of training camp, I believe, Roethlisberger was asked about his expectations for this offense in 2015, saying not only that he believes he has the most talented collection of players he’s ever had around him, but also—stated matter of factly—that they should be able to score 30 points per game.

Two games into the season so far, the Steelers are managing that feat. They are, in fact, averaging 32 points per game, all scored by the offense, with Ben Roethlisberger throwing four touchdown passes and DeAngelo Williams getting into the end zone three times on the ground.

Two games is a small sample size, but for this roster, it is a not insignificant one for a very important reason: it is about to get even more potent over the course of the next three games as some of their most talented players return from suspension.

Running back Le’Veon Bell was suspended for the first two games of the season. He had an All-Pro season just a year ago as he set a new franchise mark for yards from scrimmage in a season. While Williams played quite well in his absence, having Bell back in the fold will be an upgrade, particularly in the passing game, and they now have two trusted backs in the backfield—perhaps both at the same time, occasionally.

In two more games, the Steelers will also be getting back wide receiver Martavis Bryant, who scored nine touchdowns in 11 games, including the playoffs, during his rookie season, and was a big-play threat on nearly every snap.

Just taking a glance at some of the numbers from the last game, this is already an explosive offense, with Roethlisberger becoming the first quarterback this decade to complete at least five throws of 30 yards or more in a game. And they will be adding arguably one of the best big-play threats in the league in a few weeks.

That they have been able to accomplish their stated goal of averaging 30 points per game with a weakened roster—that is also without their leader and best player along the offensive line, All-Pro center Maurkice Pouncey—tells me that they certainly have a reasonable chance of posting a year-end average of 30 points or higher.

While the Steelers only put up 21 points in the first game, it was clear that they did many things to hurt themselves, rather than allowing the defense to dictate what they were able to do. Many of those issues were cleared up, or at least improved upon, in the last game.

But game one was on the road, and game two, when they put up 43, was at home. There was a pretty distinct scoring split between home and away last year. They must make sure that they don’t travel with their offensive problems again this year.