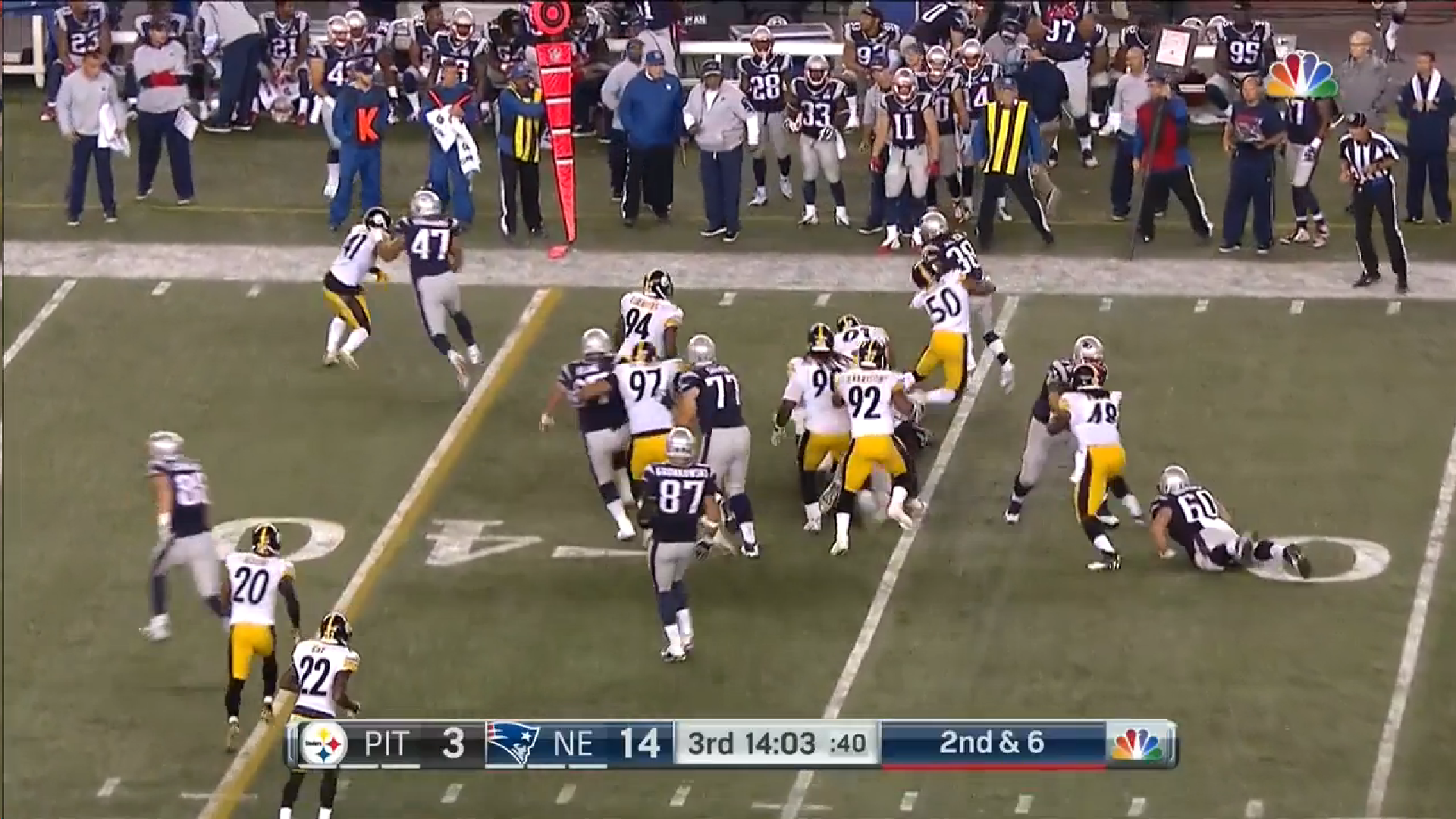 During the season opener last week against the Patriots, second-year inside linebacker Ryan Shazier essentially showed us just what type of player he is at this point, capable of making explosive, momentum-swinging tackles in the run game with his excellent sideline-to-sideline speed, but also with the tendency to miss here and there.

The next step of his development will be to develop down-to-down consistency and to reel in his speed so that it is never used against him. But the player he is right now can certainly impress-as long as they don’t stick him at outside linebacker, because he has no pass rushing repertoire in that position.

Unfortunately for Shazier, however, his first notable play was a missed tackle, his first of two on the night, which came on the Patriots’ second play. The running back had already made one defender miss when he cut back inside and spun back to the sideline to escape the inside linebacker.

Late in the first quarter, Shazier showed both strength and speed, taking on the block of a lineman and shedding him, racing to the sideline to make the first contact, though he ultimately did not make the tackle. It is a missed tackle, but I’m most concerning myself with his display of getting off the block, which he struggled with last season.

When the Steelers played in their dime defense, they took an outside linebacker off the field and put Shazier there. The last play of the first quarter was just one of those plays, which show why it’s no wiser to put him there than when they tried to do the same with Lawrence Timmons.

The right tackle cut blocks him perfectly and completely takes him out of the play, but he had even worse snaps in this position that show a lack of understanding of what to do getting around the edge against a tackle.

Back at his familiar inside position, Shazier stormed the B gap two plays later, knifing into the backfield and twisting down the back for a loss of three yards, completely blowing up the running play. This is the type of impact that he can have on a game with his combination of sheer speed and instinct.

More important than the ability to shoot the gap, however, is the ability to work laterally in order to get to the play, and he showed that early in the third quarter. Seeing the run bounce outside, Shazier was able to used his speed to beat the tight end to the edge, getting both arms on the running back to wrestle him down.

Unfortunately, the Steelers stuck him back outside on the next play, where he looked lost once again as the Patriots converted a first down to prolong the drive. And on the play after, he missed on a chance to make a tackle at the line, able to cut inside the pulling guard, but not before the lineman clipped his right arm, so that he was making a tackle attempt with just one arm, already going to the ground. He was just picked by the pulling left guard on a run around right end on the following play as well.

Midway through the fourth quarter, Shazier registered another tackle for loss in the run game, setting the Patriots back on what ended up being a rare three and out. While the edge was cleared for him, his explosiveness is what got him to the back behind the line of scrimmage.

The Steelers’ 2014 first-round draft pick impressed, especially against the run, in the season opener on a night in which the defense was plagued by communication issues. While he could stand to clean up those missed tackles, he is proving himself to be an impactful player.