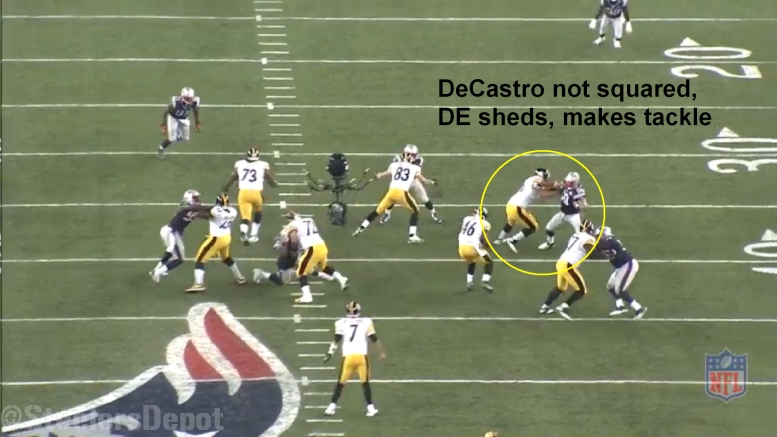 While the Pittsburgh Steelers collectively stumbled out of the block to start the season, some individual players did not. Among those was right guard David DeCastro, who was perhaps the Steelers’ best lineman, both in terms of consistency and impact, which was felt from the opening play of the game.

Off the snap, DeCastro and Marcus Gilbert doubled teamed the defensive end, and, once he was controlled, moved to the second level to get just a piece of the middle linebacker, which helped to open the cutback lane for DeAngelo Williams.

While DeCastro was consistent, there are bound to be a few negative plays here and there on the tape, and the first of the night for the right guard game late on the opening drive, after a sack and a hold. On second and 28, the Steelers ran a draw, with DeCastro popping out to take on the dropping end, who was able to easily shed the block and make the tackle after six yards.

Another play worth noting started off the Steelers’ first drive of the second quarter, which went for two yards on the ground. Working with Gilbert initially on the defensive tackle, DeCastro wasn’t ready, or unaware, when Gilbert peeled off to block the linebacker, which allowed the tackle to shed into the B gap and make the tackle.

Late in the first half, as the Steelers were driving and looking to get on the board, DeCastro pulled out to the left, around left tackle, and popped the linebacker, sending him to the ground and helping to allow Williams to get outside.

DeCastro had some solid run blocks throughout the night, but I would be doing a disservice if I ignored his work in pass protection, which was more in need of improvement than his run blocking. This second play of the third quarter for the offense is an excellent representation of what I hope is consistent improvement, as he picks up the linebacker blitzing through the A gap, ushering him out of the pocket and flat onto his back.

Two plays later, however, it was back to the ground, with DeCastro pulling and doing an excellent job of squaring up and making contact with the right defensive end as part of one of the Steelers’ staple run plays, which opened up a hole for seven yards to set up first and goal.

Late in the quarter, down 10 and facing a third and six on their own half of the field, the Steelers were presented six potential rushers at the line of scrimmage prior to the snap. The left defensive tackle got out of his block slow, and DeCastro waited on him while monitoring Gilbert. When the tackle did come on the rush, the right guard calmly picked up him and walked him up the arc.

DeCastro’s biggest miss came early in the fourth quarter when he slipped off his block on second and goal at the one, which certainly contributed to the back not getting in. He missed some plays, to be sure, but he more than made up for the ones he made.