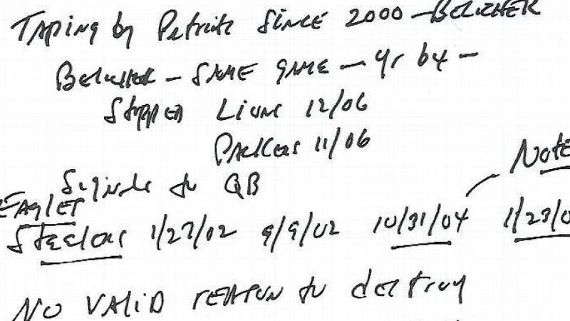 With the publication of an early morning exposé today, ESPN resurrected what for many had never actually gone away—the notion that the New England Patriots organization has a rampant history of “pushing the envelope” that goes back at least as far as Bill Belichick’s inaugural season as head coach.

And the Pittsburgh Steelers had been as big a target as any, even if, publically and privately, the team brass had moved on.

According to the report of Dom Van Natta Jr. and Seth Wickersham, the Patriots had filmed at least 40 games over the span of seven seasons leading up to the breaking of Spygate early in the 2007 season, when former Patriots coach Eric Mangini, then the head coach of the New York Jets, alerted his owner, Woody Johnson, to the taping of signals.

Jets security caught Matt Estrella filming the signals during the opening game and alerted NFL security, which opened up the entire Spygate investigation which, as many already felt, it turns out was more about closing ranks and protecting the NFL than in doing due diligence, as the ESPN report alleges.

Former US Senator Arlen Specter had set his eye upon the league in the wake of the investigation, during which Commissioner Roger Goodell authorized the destruction of “a library of scouting material containing videotapes of opponents’ signals, with detailed notes matching signals to plays for many teams going back seven seasons”.

Among those videos and notes were a number of Steelers games, including the AFC Championship game in 2002. The ESPN report cites a former Pittsburgh coach, who maintains that the Patriots “knew the signals” and that former New England players who have been on his teams have “told me these things”.

Former Steelers wide receiver Hines Ward has always been adamant in maintaining that the Patriots knew the team’s offensive signals, claiming that New England’s defenders were calling out the plays as they were coming in and adjusting themselves accordingly.

The report also alleges that some of the Steelers’ defensive coaches “remain convinced” that the Patriots exploited signals, citing a long touchdown pass in the 2005 AFC Championship game that “came from stolen signals because Pittsburgh hadn’t changed its signals all year”. The Steelers and Patriots had played during the regular season.

Among the library of scouting material of football research director Ernie Adams “were handwritten diagrams of the defensive signals of the Pittsburgh Steelers, including the notes used in the January 2002 AFC Championship Game won by the Patriots 24-17”.

Yet none of this material exists any longer. In fact, very few have ever seen any of it, because the league sought its destruction, and the Patriots maintained proprietary ownership over some of the material that was obtained legally, thus forcing the NFL to dispose of the material in New England’s own headquarters.

While the Steelers may have moved on from what many fans still view as robbed opportunities of more Super Bowls from the early part of the 2000s, during which Pittsburgh lost to New England twice in the playoffs, many others remain left wondering just how extensive the cheating was, and how it has shaped the course of the league’s history, as well as Pittsburgh’s legacy.