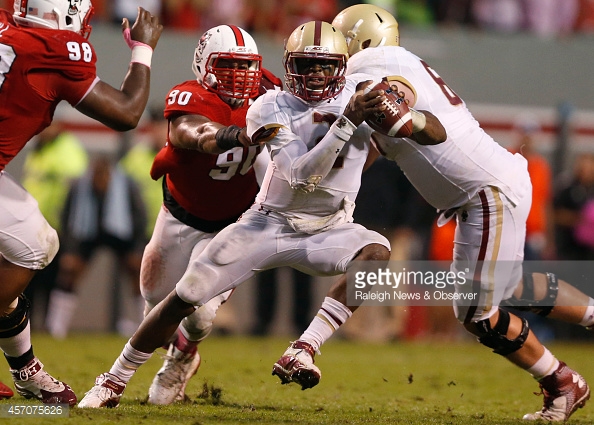 He’s been a quarterback. A receiver. A gunner. A jammer. Maybe he fights crime at night? Tyler Murphy has done it all in training camp. And it’s why he deserves a spot, somewhere, on this team.

The official site can list him wherever they want. It doesn’t matter. Murphy will wind up playing all over the place.Pegged as a receiver coming out of Boston College, it seemed like a tall task when he was asked to stay at quarterback. Sure, he played there in college, but the numbers never suggested the ability to translate. But he received reps under center in the spring and was picked by the coaching staff to remain there over Devin Gardner, who made the full-time switch to wide receiver.

A rookie who thought he was going to play receiver now helping to back up Ben Roethlisberger? Talk about a whirlwind. Murphy performed admirably for the circumstances, not looking lost in the reps he received. He jumped Tajh Boyd early into camp, stealing the second year player’s reps under center. When injuries piled up at receiver, Murphy would hop into that group to serve as an extra body. There was literally one sequence where he switched from quarterback to receiver then back to quarterback and receiver in consecutive plays. Clearly, the team isn’t worried about putting so much on his plate, a testament to how quickly he can pickup a playbook and take coaching.

With Bruce Gradkowski back on the field, Murphy has appeared to make the switch to wide receiver for the remainder of camp. One day in and he’s already shown his athleticism, adjusting to the ball mid-flight and making some impressive grabs. Mike Tomlin even heaped praise on him, a rare moment for a coach who doesn’t prefer to talk those players up.

In Friday’s game, he logged nine snaps on special teams, on the coverage and the return unit. He’ll probably continue playing there the rest of the preseason.

Murphy has next to no shot to make the 53 man roster, spurned by the numbers crunch. But he makes for an ideal practice squad candidate. The more hats you can wear on the scout team, the more people you can mimic, the more valuable you are. He can impersonate the rushing quarterbacks Pittsburgh will face throughout the year; Colin Kaepernick, Alex Smith, Andy Dalton, and Russell Wilson. Those are all teams that incorporate the the read option and RPOs, the only plays Murphy ran in the Hall of Fame Game against the Minnesota Vikings. It’s an athletic quarterback the team has never really had before and in a league that is developing all types of quarterbacks.

Building a roster is all about maximizing your talent. And Pittsburgh knows as well as any team you get that, in part, due to versatility. It’s why all the backup lineman shifted yesterday. It’s why we care about if a corner is capable of playing inside and out. Or why we get geeked when we see Ian Wild sub in at inside linebacker.

Here’s the bottom line. Murphy is an athletic kid who is holding his own in a role many others would crumble in. If that doesn’t make him worthy of the practice squad, I don’t know what is.